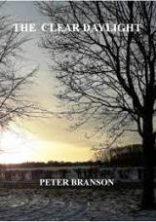 The Clear Daylight is a perfect title for Peter Branson’s prize-winning collection, because it does shares a clear vision of the world enhanced by technically accomplished poetry. It offers a refreshing exploration of the natural order, human relationships, innocence, experience, along with poems of political commitment. Particularly impressive is his metaphorical power, deepening and widening our experience as we see how “Love conquers all” in this “world rubbed raw”.

Branson is a champion of the vulnerable. Adept at capturing the richness of life, he is nevertheless disturbed at the sight of injustice and his responses can be disturbing. This tension is explored repeatedly in the collection’s broad scope and integrity. It draws on the murder of MP Jo Cox and the Manchester bombing in 2017 as well as the Covid epidemic in the present day, and takes us to the remotest times in the ceremonial killing of “Pete Moss”, the Wilmslow bog man. The theme of vulnerability and corruption returns as Branson enters deeply into the world we share with animals, an arena of loss, beauty, anger, hope and love.

In poems like “First Rites Beyond Red Hill” a child looks into the adult world which is “twenty stops away” and is attracted by the allure of the town’s bright lights, but with a growing awareness of its dangers. Youthful intimacy is also imperiled, but by intolerance in the sensitively written “Celibacy Unsprung”. The apparent innocence of the instinctive world of nature succumbs to human predation: we encounter a dazzling aviary as eagles, woodpeckers, hobbies, buzzards, crows, owls and curlews flash before our eyes in their uneasy coexistence with civilization. Branson’s genuine delight in birds, their forms and movement, “all warp speed dart and dive”, shows a powerful gift of observation. On the one hand, he is alarmed as the sparrow hawk kills in “Sanctuary”, but at the same time he acknowledges its necessity in the natural order of the food chain. He addresses the work of painter Samuel Palmer in “Goatsucker” and, one senses, an admiration for John Clare and Hopkins in the enchanting “deer fleeting in their fey retreat like ghosts” or “an elfin mist creeps by despondent/ with hindsight,” in “Big Picture Show”.

Branson takes the reader into family life, too, in poems like “ Shearing Time” where we meet a father, about whom we are told“His vice to grasp all things/ mechanical, that was his therapy”. Meanwhile the mother is described as “a conjuror behind closed doors, she mine,/ me hers”. Similarly warm treatment is given to the uncle in “Fixed Odds”, whose lungs, damaged by a lifetime on the dusty building-site, didn‘t prevent him placing illicit bets at the secret bookies that his wife condemned as a sin. In “The Doll Collector” we find an affectionate account of an old woman, a dedicated doll collector suffering from Parkinson’s disease aged ninety-one, for whom the “strict order” of the dolls in their box gave her last days stability and focus.

In a number of virtuoso pieces, Peter Branson turns his hand to traditional song. His aim is always true and the result is never less than stirring as he juxtaposes historical events with today’s perilous issues. “Believe!”, the opening poem in the collection, parallels the events of the Peterloo Massacre in 1819 with the Thatcherite destruction of the miners’ strike in the 1980s. “John Barleycorn’s Lament” takes the traditional folk ballad and puts Adam Smith in the dock as the originator of today’s rampant capitalism, pollution and climate change and shows how “we’re at the tipping point”. “At the Dying of the Light” leads us to the tragedies of the Manchester Arena bombing in 2017 and the destruction of the Arndale Centre in 1996 with the conclusion “ religion stirred with politics / makes an explosive mix.” Yet in the ironic little poem “Ver Sacrum”, sacred spring, the song collector refines the labouring man’s words for choirs to sing in church, just as the poet, articulate and ceremonious, refines his own collection, too.

Peter Branson is a very accomplished poet. The Clear Daylight demonstrates his wide virtuosity and subtle awareness of place and detail and deserves to be widely read.
.

John Williams, author of poetry collections Reading Lesson in the Lifers’ Wing ( Peterloo, 2009), The Model Shop (Waterloo Press (2011) and  On Lipstick Beach (Poetry Plus (2017), studied English at the University of Durham and did postgraduate work at the Universities of Manchester, Sheffield and Newcastle-Upon-Tyne. He taught in schools and was Senior Lecturer in English at University College Chester. He contributed entries on Greimas and Malinowski in Key Thinkers in Linguistics and Philosophy (Edinburgh University Press) and is currently running the Poetry Stanza in Staffordshire while working on his next poetry collection, Wild Ride.