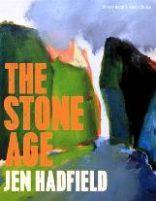 The physical construction of The Stone Age has an impact on the reader that’s both important and hard to analyse. It starts with a relatively simple example of a concrete poem. Called ‘Stone Circle’, this is a circle of eight ovals like the noughts on a Microsoft keyboard, with two placed close together, suggesting an entrance. Thereafter, scattered between groups of poems set out in a conventional way under their titles, there are unheaded poems printed in greyscale letters of hugely varying sizes. These poems have practically no punctuation except that given by dramatically varied spacing. Their effect is dependent on their presentation, so I don’t think there’s any value in quoting from them here, but they’re both haunting in themselves and have a strong impact on the way we read the more ‘regular’ poems. These seem to emerge with the sudden clarity of things seen through rifts in mist or moments of waking, and then to recede behind the mistiness or hypnagogic uncertainty of the next greyscale poem. Some of the greyscale poems are evocative of elusive sense impressions; others directly or indirectly evoke elusive or liminal modes of consciousness or communication. They’re untitled on their own pages but given titles of a sort on the Contents page – ‘of a sort’ because these titles are only offered in brackets.

The blurb on the cover describes the poems as an ‘astonished beholding’ of Shetland and that puts a finger on something essential about how they work. Cast as descriptions, anecdotes or addresses, they don’t seem to consider rocks, sea creatures, sea or weather so much as to feel their impact. The poet meets them as sentient, conscious beings in a world her poetry makes seem alive in all its parts. An example would be the beginning of ‘Pictish Stone’, where description of an ancient carved stone stele is entwined with address to an unconscious human, apparently very old and perhaps dying:

The words themselves are mostly simple, common monosyllables but they’re beautifully paced and placed to draw us into a hushed, almost hypnotic interplay of suggestions and associations in which the inhuman stone and the unconscious person become as it were metaphors for each other and both are made to seem alive in similar ways. The odd construction of that first sentence contributes to the effect of a trancelike blurring of stone and person – the speaker’s mind seems to move onto a new line of thought before finishing the old one.

There’s a more elaborate, strenuous and possibly strained interchange between human and non-human poles in ‘Nudibranch’. Here, Hadfield projects herself into a nudibranch – one of those weird, brilliantly-coloured ‘sea slugs’ with exposed gills – having it speak as if it were a woman in a clothes shop:

So far, so good. Metaphor always depends on both the likeness and the unlikeness of the things compared. Usually the emphasis falls on likeness, on what makes the two ideas flow together. Here, what both fills the image with an animating strangeness and makes it feel not quite right or comfortable seems to be the way our visualising splits between images of woman and nudibranch. There’s a point to the hint of discomfort here. Apart from suggesting the difficulty of the imaginary identification, the contrast between the slight sense of strain in the beginning and the ease of the ending gives the end its feeling of rapturous arrival. However, to my mind the splitting produces a patch of bad, clotted writing in the middle of the poem:

After this lapse, the simplicity of the last lines beautifully suggests the relief of achieved ease, , of having completely become the nudibranch as it cherishes these elementary sensations of being at home in its pool:

The book is full of such vivid, arrestingly empathetic encounters with non-human things. I’ve never been to Shetland, but a friend who has says they’re highly evocative of its particular atmosphere.

The other side of these encounters is the impression we’re given of the speaker herself. Here it’s necessary to be tentative because we’re dealing with floating impressions created in different poems, joining them like an old-time astronomer looking at Mars and seeing a network of canals. It’s their very indefiniteness that makes them evocative, and what I say about them may make them seem more substantial than I mean to. I’m not sure whether the term ‘neurodiversity’ that I’ve seen on material about Hadfield is or isn’t useful or true – I’ve always thought the feelings I’m about to talk about were fairly common among shy, introverted people, though presented here with unusual sensitivity and sharpness of focus. I’m sure many people coming out of the social restrictions of the covid period will be experiencing them.

The first feeling is one of separation. In contrast with the speaker’s passionate communing with nature, in ‘Gaelic’ she presents herself as finding difficulty understanding and communicating with other people, becoming ‘exhausted of / conjugating feeling, parsing silence between speaker / and listener, and remembering to ask / questions, direct but not too / direct’. She feels her interlocutor suddenly looking at her as if she herself were talking incomprehensibly in Gaelic. The delightful prose poem ‘Umbrella’ touches on the same theme – thrillingly evocative of the sheer wateriness of rain, blurring into an almost visionary apprehension of people as ‘wells of standing water’, it closes on an image of her own alienation from the women chatting round her, seeing them as if they were gilled creatures standing in the rain while she sat cut off from it under an umbrella. A more intimate version of similar feelings appears in the extraordinary ‘(Your tongue)’, one of the experimental poems whose title only appears in brackets on the contents page. Much of the poem’s power in the book comes from spacing, from the effect of the pale grey-scale printing and from the way lines in dramatically enlarged fonts loom up between others half their size. However, the bare words will show how the poem gets depth from its hinterland of untold story, from its obliquity and the way simple lyrical intensity bursts out of confused indecision. As printed in The Stone Age I find it both tantalizing and moving:

More often, though, inferences about the poet’s sense of herself are suggested by the way she describes the things she sees, and depend on an assumption that what she sees in them also expresses an emotion or desire of her own. Suggestions that might be faint in themselves are reinforced by echoes between poems, as I suggested earlier, and become cumulatively compelling. So, for example, a poem called ‘Rockpool’ seems to connect with ‘Limpet’. In the first, after an exhilarating description of the seedling barnacles streaming down like falling stars, she closes

Then ‘Limpet’ takes the form of an address to a limpet, vividly evoking its motion (in a full rock pool) and its return to its very own spot on the rock when the tide goes out and it must clamp down to preserve moisture. It ends with a brilliant metaphor

The use of the second person – frequent in self-admonition – and the human, technological metaphor of lock and key add to the impression that this poem is about the speaker as well as the limpet she’s theoretically addressing.

What I’ve called the ‘greyscale’ poems are ‘experimental’ in a radical and obvious sense. I’d like to think my quotations from others have suggested the originality and creativity of Hadfield’s expressive use of metre and line break in all her poems. Creativity of this kind is one of the many pleasures offered by a book that richly rewards careful and repeated reading and gave me considerable pleasure. I hope it’s not churlish to end with a minor reservation. I liked her repeated ending of poems with a dash, as in my last two quotations, suggesting openness and inconclusiveness. However, I couldn’t understand a trick of starting lines with a full stop or comma that appeared in several poems.