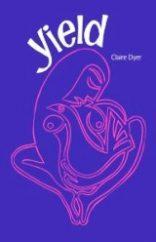 In these poems, Claire Dyer describes, in an emotional, profound and honest way, her child’s journey of transitioning from boy to girl, from Liam to Lucy. She projects her anxieties, fears and grief in thoughtful lines, tracing the steps from loss to acceptance while she passes through several, sometimes painful, stages of negotiation. The process is chronicled in detail and emphasises the difficulties but also the positive ongoing relationship between mother and child. This relationship has never stopped and eventually engenders a reciprocal understanding and the celebration of an intense and more comprehensive concept of motherhood and love. The poet has her child’s permission to refer to her by her old name, status, gender and pronoun where appropriate and has her daughter’s full support for the book.

In the course of the narration, the three main meanings of the word yield are unravelled: to give forth, to surrender and to supply or produce something positive.

Yield can also mean restore and consent and this adds even more subtlety to the complex feelings that enrich Claire and Lucy’s relationship.

The poet’s feelings of loss and pain and her worries about her child’s safety seem to predominate at the beginning of the collection, and these feeling are cleverly observed, described and processed via stark images that reveal the different sides of the experience; it is an evolution which implies that contradictions and misunderstandings arise while the author tries to make sense of what is happening:

Dyer speaks frankly about her moments of crisis; she mentions her insomnia and uses animals such as foxes and fish to personify her fears and worries, creating a dreamlike atmosphere in which she re-experiences the loss and tries to restore a new reality from scratch.

The depth of Dyer’s poetry is especially revealed in poems such as ‘A Difference of Opinion’, in which the impeccable form reflects the flowing of contradictory feelings of sorrow or sadness and of peace in the fluent enjambments:

The repetitions and controlled, deft lines seem to try to categorise but lose control when the lyrical voice prevails and Dyer is immersed in the uncertainty of everyday life. Grief and pride alternate in her attempt to protect her child from the possible disapproval of others and to reaffirm her motherly love, which is adapting to the unexpected situation.

Dyer took five years to compose the collection, aware that she needed time to understand her daughter’s and her own transition before she could celebrate the renewed togetherness with Lucy and as a family. The process of writing therefore works as a catharsis of sorts that connects with deep unconscious emotions which prompt diverse meanings. The final poems in the collection reveal the healing and rewarding effects of the mother’s unconditional love, which was difficult to achieve but was finally embraced in all its power; it implies Dyer has let her daughter go. As Kahlil Gibran says in his famous poem ‘On Children’, ‘They come through you but not from you,/And though they are with you yet they belong not to you./You may house their bodies but not their souls, […] You are the bows from which your children as living arrows are sent forth’.

The concluding poems are emotional in a positive way and reinforce the feminine connection of mother and daughter, as in ‘Shopping’ (something the poet could not cope with at first), which cleverly echoes ‘The Love Song of J. Alfred Prufrock’ by T.S. Eliot:

In this collection, her third, Dyer reveals clear observations of a crucial moment in her life that touched her profoundly and challenged all her certainties, including her belief in ‘an individual’s right to be whoever they want to be’; her observations propose a restoration and renewal that relieved her of her grief and pain. Her experience is described in skilful and honest poems that recall the process of reaffirming the progression of love and family ties. The experience is eventually handed to the reader, who can use it as guidance. The mother, now ‘a pearl’ in her daughter’s pocket, hopes that this is a ‘promise for us both.’ As Dyer puts it, the poems are ‘a love song from me to my child’ in a future vision that is open and hopeful.