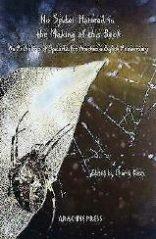 No Spider Harmed in the Making of this Book

NO SPIDER HARMED IN THE MAKING OF THIS BOOK: James Roderick Burns ventures into an anthology – edited by Cherry Potts – which is devoted to the eight-legged creatures which are a source of alarm to many people.

The underlying spirit of this anthology – and its timing – are so right as to be inevitable, almost over-determined. As the editor notes, “watching the historic judgement of the Supreme Court in rejecting the illegality of the prorogation of Parliament, I was entranced by Lady Hale’s spider brooch … It’s going to be alright, she’s wearing a spider … as I turned off the TV and went back to my desk I thought, Time for a spider anthology and Oh! It’s our eighth anniversary next August!”

So here are 18 poems, followed by 18 stories – neatly bridged by Martha Nance’s ‘Spiders I Have Known’, a poetic six part (non/fiction?) piece which works both as prose poem and compressed narrative – in which spiders are thoroughly explored, imagined and celebrated in all their hairy glory. It is not a book for arachnophobes, not even on the principle of know thine enemy. It is a collection for those who throw open the barn door, the kitchen window or the bathroom plughole to every eight-legged guest, deploy the cardboard-and-drinking-glass technique to escort spiders from the premises for squeamish family members, and who make a beeline for the nature documentary, the web series and the monster movie.

In short, all of spider life is here.

As the anthology is very substantial (at more than 140 pages), and so comprehensive, it includes work mulling over our relationship to the spider in almost every genre but romance (and even then, the whole book is somewhat romantically inclined): sci-fi, fantasy, gritty realism, fable, classical re-workings, lyric, free verse, rhymed metrical verse, haiku. There is a marked tendency towards fantasy in the stories, as might be expected, and towards free verse in the poetry, but this doesn’t detract from the overall impact. While I as a reader have spent a very long time indeed avoiding fantasy literature, the pieces here (Margaret Crompton’s ‘Spidergirl’, Peter T Donahue’s ‘Arachnomancy’) are deft and nicely done; similarly, the broad brush of ‘spiders in space’ reveals subtle details of plot and texture that are rewarding in themselves, adding new insights to both spider lore and the persistence of nature in the face of technology. (David Mathews’ ‘Stowaway’ is notable here.)

But my favourite of the stories are the realist pieces, particularly Phoebe Demeger’s ‘Clearing Out the Shed’ and Patty Tomsky’s ‘Spider Circus’. In the former, Demeger works through the reasons why – despite her title – not clearing the shed of its occupants is the best way to hand it on, and notes in a poetic aside:

‘Spider Circus’ is grittier – a tale of puzzled friendship emerging from the main character’s determination to convince a fellow student of the reality of flea circuses, and the need to move on to greater things (hence the title) – but no less insightful, capturing the sorts of social sight and blindness woven around us by money, and its absence:

The story ends with the unravelling of some of these threads of ignorance, with the revelation of how flea circuses (and I suspect, the illusions of the economy as well) actually work, and leaves the characters poised on the edge of romance. It is an uplifting moment, and not hairy at all.

The poetry, too, is filled with intriguing images and singing lines. Jennifer A MacGowan’s ‘Lady Hale’ riffs on the editor’s introductory remark, asserting that spider silk (which I take to be a shining female achievement) “is the only thing/holding the world/together”, while Kate Foley’s ‘Spin’ questions through imagined absence the horrors of life without time’s strands twining up its contradictions:

There is a suggestion that without the spider-like spinning of the seconds, this is a hill we would die on long before our time. But perhaps the greatest use of arachno-imagery occurs in Stella Wulf’s ‘Femmes Fatales’, with whose final, erotically-charged stanza I will finish. It is, as with most of the anthology, not for the faint-hearted, those who quail at the sight of a spidery leg, but is also rich, allusive and shocking, the best sort of literature to remind us we are as alive as any of our eight-legged friends: