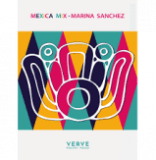 Where I am: Brian Docherty reviews MEXICA MIX a new poetry collection by Marina Sánchez

Somewhat surprisingly, Mexica Mix is only Marina Sánchez’ second publication under her own name, although she is well represented in anthologies and group publications such as those of Word For Word Writers Group from Crouch End. Her first pamphlet, Dragon Child (Acumen Publications, 2014) is a sequence of poems starting from her discovery that her daughter had the genetic disorder called CHARGE syndrome. A short Introduction puts these profound and moving poems in context. Her decision not to publish a Selected Early Poems is vindicated, although a reading of the 26 or so poems and short prose pieces found in Word For Word anthologies shows that ‘In Your Hands’ is a revised version of a Word For Word Anthology poem ‘Sunbeams’, while ‘Prognosis’ might well have fitted in Dragon Child.

If we turn to Mexica Mix, there are several Anthology pieces, such as ‘Mexican Wave’, a fine prose piece, ‘Mosaic, and ‘Jaguar in Yucatan’ which were presumably excluded for reasons of space. The pamphlet’s title earns its keep, with ‘Mexica’ denoting people of Nahuatl heritage, and ‘Mix’ referring to both cultural and historical mixing and also to this term’s use in popular music, where a mix is a creation which involves taking an existing song or tune, and re-working it to make something new and distinctive, blending different elements. This Mix is a coherent and focussed sequence in three sections, where personal, cultural, and historical identity are interrogated, and the term ‘Latinx’ is deployed on the back cover as a marker of identity.(As a non-Spanish speaker, your reviewer’s understanding is that Spanish is a gendered language, where personal identity is assigned in two main ways; if Latinx is inclusive and non-specific, surely that is a good thing.)

In the first section “Family”, we are introduced to the writer’s father, in ‘For my Father Each Time He crossed the Pyrenees’. The poem focusses on her father’s footwear and clothing,

Sánchez resists the temptation to overload the poem by telling us, as Wikipedia does, that ‘in the 20th century Bourg-Madame was the site of a camp housing Republican escapees from Spain at the end of the Spanish Civil War.’

In ‘Colonial History’, we learn that

This was the food prepared by her maternal grandmother. The poem goes on to offer an insight into her parents’ quarrels, with her mum calling her dad el conquistador. In ‘Clouds of Doubt’, her mother’s lipstick conjures ‘clouds of doubt/ about where she was born’, and the child is left to ponder the complexities of heritage and history. In the next poem, a reflection on how her mother coped with bereavement, we find ‘She cursed her luck: ¡Mi puta y rechingada suerte!’ This, unlike some of the other Spanish or Mexican expressions in these poems, is left untranslated in a footnote. A quick search shows why; perhaps poet or publisher chose not to render this in English. We move on to a scene of two sisters finding old family photos in ‘Considerations When Curating the Past’. This brings up painful memories,

‘Bodies of Water’ shows us how the poet has come to terms with the memory of these experiences,

The poem’s last line is ‘unafraid of silence, unafraid of drowning.’ The “Family” section of this pamphlet concludes with two poems reprinted from Dragon Child, and two that read as if they belong there. While this adds an element of cohesion and continuity to Sánchez’ work, it raises other questions.

The second section, “Icons”, opens with ‘Black Madonna in Wood Green Shopping City’, where we are introduced to Our Lady of Guadalupe, a familiar figure from the poet’s childhood,

and now this icon has appeared in a north London suburb, just as she has in Hastings, and no doubt other places. In ‘¡Ay Dios Mio!’ , an ekphrastic response to Alma Lopez’s digital collage of Our Lady of Guadalupe, past and present, ancient and modern, collide and inform each other. This very modern image holds the poet’s attention, making her wonder if she should be colloquial or formal in addressing Our Lady, who has the last word.

‘Mija’ is footnoted as ‘my daughter’. Malintzin Tenépal, Malinalli: Revised’ introduces the reader to part of one of the most significant episodes in Mexican history, the arrival of Hernán Cortés and the Conquistadors. The poem’s title refers to a Nahua woman, baptised as Marina, who acted, according to Wikipedia, as interpreter, advisor, and intermediary for Cortés. She is a complex historical figure, interpreted and re-interpreted in many ways, often negative. She is credited as the mother of Cortés’ son Martin, possibly the first mestizo, or person of mixed heritage in Mexico. The poem is a forthright first person monologue, pointing out among other things, that the contest between Spaniards and Mexica was totally unequal.

Malintzin refuses to be labelled victim, whore, betrayer, but as ‘someone who responded the best way she could / to extraordinary circumstances’. She also points out that many men have betrayed Mexico without blame. The piece ends with Pero no te chinga! on one side of the page, and Fucks me off it does on the other. As an example of one woman speaking out on behalf of all women, this is a powerful statement.

This is followed by three poems exploring first, the personages associated with the Day of the Dead celebration, then aspects of the Aztec heritage underlying modern Mexican history and culture. In ‘Itztli Tezcatl’ , where the obsidian mirror is a metaphor for Nahuátl, the most widely spoken indigenous language in Mexico, as a footnote informs the reader. Stanza three shows us this

while the poem concludes ‘ I wait to gaze at my original reflection.’ This exploration of history, culture and identity is one of the more successful negotiations of this territory your reviewer has encountered.

Section three, “Earth”, is more personal, and brings us up to the recent present. ‘Riviera Maya’, in five stanzas, shows the reader what the poet will not describe, mention, question, ask, say, before the final stanza says

Indeed. ‘The Axolotl’ is a portrayal of an amphibian, the neotenic salamander native to Mexico City, and the wetlands existing before the city was established. The final stanza informs us

Who indeed? Past and present, the reality of Mexico City as a great city built at great ecological cost, are figured here as the local and particular leads out to the universal. The next poem, ‘Exiled Monarchs’ refers to Monarch butterflies, continuing the ecological theme, and shows the butterflies’ habitat disappearing. This poem ends

‘Wall’ deploys a similar strategy to ‘Riviera Maya’ to convey something difficult to describe adequately, the continuing migration from Mexico and Latin America to El Norte. Stanza one refers to coyotes, the criminal gangs who extort money from ‘illegal’ immigrants, while stanza three shows us ‘the gun shell casings from the Migra’, this being the US Border Patrol. The Wall is Donald Trump’s legacy, one more problem for President Biden to address.

Mexica Mix concludes with ‘ Blessing Spring 2020’, a Lockdown poem that could be set anywhere, but may well be located in Crouch End, where the flowering Cherry trees, (Prunus serrulata) grace several streets. Stanza one sets the scene,

while the last stanza reads

Sánchez has taken the reader on a remarkable journey through several sorts of histories and landscapes, and it seems fitting that she should say ‘Adios’ from north London. If there are any publishers reading this, you know what to do.

One Last Thing: in my usual practice of channelling Steve Jobs, a note on the pamphlet’s production values. Mexica Mix is a well-produced and attractive publication, whose cover features a brightly coloured background overlaid with what appears to be a graphic of Aztec origin in white. The artwork and book design are uncredited; presumably either Sánchez or her editors at Verve made this. The poems are well laid out, easy on the eye, and there are no noticeable typos. There are plenty of footnotes to gloss Spanish, Mexican, or Nahuátl expressions, with one notable exception noted above. How many of us knew that ‘Mariachis’ is ‘Mexican orchestras that play Mexican music’? Seriously though, reading these fine poems was a pleasure, and a learning experience.