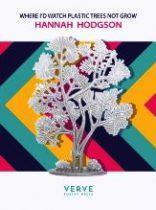 Hannah Hodgson is a young and dynamic poet. Although it is customary to describe her as ‘a poet living with life-limiting illness’, I should very much prefer to avoid that description, and concentrate on her work, because she can stand comparison with any poet who does not suffer her disadvantages. However, because so much of the poetry in this pamphlet has grown out of Hannah’s experience of serious illness and hospitalisation, it is not possible to ignore that aspect of her poetry. Suffice it to say that for the reader, it is the poetry that makes this poet stand out, rather than her illness.

At times the poetry is almost unbearably direct and painful; yet what a privilege it is to witness such dark material being transformed into gold. This is achieved partly through Hannah’s honest responses to life and her dry, sometimes dark, humour: ‘I knew it was a Tuesday by the smell of chips’ (“Isolation Ward”); but there is no pretence that her life is anything other than challenging and lonely; and death is a constant presence in her life and in her poetry. She even points out that sick kids are ‘more comfortable with death than adults’ (“The Rainbow Room”).

In her forthright way, Hannah reminds us that of course she objects to being gawped at; she objects to intrusive questioning; she wishes she had some bolt cutters to help her escape from hospital; and she hates the realisation that her former friends are gossiping about her (“Everybody loves a dying girl”). Those visiting the sick in hospital can reveal aspects of attitude and behaviour that are unattractive, offering ‘platitudes that land like butterflies / hardened mid-flight’ (“The only person I knew with my condition” – is dead’). It is sometimes possible to interpret her words in two opposing ways. For instance, in “My Mother’s Russian Dolls”, the lines

This comment can, I think, appear either innocent or barbed.

While a bright light is shone on some of her visitors, the doctors, too, are sometimes found wanting:

However, while there is so much in her situation to pull her down, Hannah manages in general to retain a stubborn optimism despite all: :

In terms of form, quite a number of the poems are in tercets or couplets, which gives space for reflection while allowing a clear directness of diction and thought. One particular quirk which Hannah employs to good effect is dividing a natural sentence into two independent parts. Strictly, the effect is ungrammatical – but, strangely, it works: ‘I’ve seen my consultant cry once. When she couldn’t save a life, deserted by her superpower’ (“Crashing”). There are several other examples, such as in “52nd Day of Self Isolation”: ‘It’s transforming into that sort of week. Where the days drag like a foot’, and the effect can be a slightly breathless quality, which suits both the poet’s youth and her struggle to live.

There are very few errors in the text, though a careful edit would have saved Martial Law from coming out as Marshall Law (“Leaflet dispensed by crows …”). Also, personally, I would encourage all small press editors to take care with pagination, as it looks rather unprofessional for the first poem to appear on page 6.

This short collection of 23 poems could easily be read in a single sitting, but I do not recommend this. For a start, the searing rawness of the emotion requires occasional respite; and secondly because Hannah’s poetry is worth reading slowly and meditatively, rather than being rushed through. I came across some words and ideas in reading the poems that I had not needed to learn before, but which are presumably common currency for Hannah: for example, a ‘resus bay’ is, apparently an area for resuscitation.

Hannah is completely unsentimental, as she has earned the right to be (“After the Curtain”). While there is no point in her pretending that her situation is anything other than grave, she is full of life and hope, and expresses even the most searing truths in beautiful language, as in “Death Rattle: ‘It ends with a moment of clarity, / final words like an April shower / slowly evaporating.’

I therefore recommend this pamphlet. I also urge readers not only to engage with such a courageous collection, but also to look out for Hannah’s future work, and to pay her the compliment of defining her by her poetry, not by her ‘life-limiting illness’.