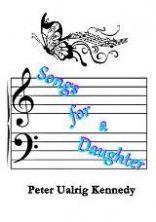 Poetry review – SONGS FOR A DAUGHTER: Peter Ualrig Kennedy has written a moving sequence about his learning disabled daughter which is highly personal yet keeps the reader engaged throughout

Peter Kennedy rather spikes the guns of any reviewer disposed to question his choice of subject matter for his new collection. In a brief introduction he acknowledges that “In writing poems about a great hurt, there is a danger of sliding into saccharine sentimentality.” It follows therefore that the reader of the poems can be sure that Kennedy is anxious to avoid sliding too far in that direction; and if, on a few occasions, he can’t completely stop himself we are much more likely to forgive him.

The “great hurt” that Kennedy writes about is the severe disability of his daughter Megan, now grown up and living in residential care. The poems follow the course of Megan’s life from birth – when her parents had to face the diagnosis that “anoxic brain damage … had stripped you of your capabilities” – through years when she was cared for at home until “the day came when we knew /we were going to have to / let go” and on into the present when the relationship is largely through regular Sunday meetings and excursions from her care home.  A late poem even dares to contemplate an eventual future for Megan as an orphan, taking a poetic deep breath as it does so ‘when we are        not / what will you recall?’

The very important Sunday visits are celebrated in a group of four poems around the middle of the book. ‘Magic Sunday’ is an accomplished prose poem which explores Megan’s world of non-verbal communication as she waits for the family to arrive

In ‘A Sunday visit’ Kennedy (who is a hospital doctor) records occasions when “it’s my on call weekend” and Megan accompanies him in her wheelchair on his ward rounds. The poem reflects on his motivation for including her in his working life in this way but eventually undercuts the introspection:

‘Sunday sonnet’ is one of several well crafted formal poems in the collection and it touches on two themes that recur throughout the book. While regretting that “I cannot read the language of your eyes”, Kennedy nevertheless frequently tells us about looking into those same eyes, seeing an inner light in them and finding beauty in their “hazel and blue”. The sonnet also speaks of dream encounters with Megan in which she can speak or dance. Such dreams and the subsequent re-tellings of them feature in many of the poems and enable Kennedy to express a kind of optimism for remission or recovery that cannot realistically be entertained in the waking world.

For me, however, the best of the Sunday poems is the shortest and most understated one. ‘Sunday morning’ pictures families leaving church on a rainy morning in the street outside Kennedy’s house while he and his wife are at home “with our mute daughter”. And then

Those last two words are perhaps a risk – but I think this quiet introduction of the sacred is beautifully judged.

It would be fair, I think, to say that the whole book is quietly and knowingly understated. It could indeed be called poetry of witness – but undramatic witness, reporting what has happened without much analysis or recrimination about the causes or the randomness of misfortune. Within the limitations of Megan’s life, small rituals and achievements assume great importance and are greatly valued – for instance her enjoyment of the game of Round and Round the Garden played on her open palm. That she learned to manage a knife and fork is something to be grateful for; as is her dexterity with a cup

Such immaculately stated practicalities are given their due worth and dignity again and again. In the bath “she can do that trick with her wet soapy hands … to make the sound of a raspberry”. But there is also a more serious need for “the piece of kit that makes it possible / to bath this adult child”. That item is a hoist – and the absence of one in the family home contributed to the painful decision to transfer Megan to residential care. As Kennedy puts it at the end of ‘Having a Bath’

These closing lines demonstrate Kennedy’s ability to provide haunting or powerful endings or “pay-offs” to his poems. The unexpected sacramental conclusion of ‘Sunday morning’ has already been noted; and in the poem ‘Her Cup’ – also quoted above – Kennedy goes on to recall a time when Megan was in respite care

This seems very much a father-daughter book. Megan’s Mum is mentioned but not very often. The poems barely refer to Megan’s three siblings; and the care staff seldom appear as individual characters even though Kennedy’s gratitude and admiration for all of them is clearly expressed. These “omissions” – if we can even call them that – contribute to a sense that the collection plays out on quite a small stage with only a few actors and not very many props. Within these constraints, however, Kennedy has produced a very moving and truthful book. And in terms of poetic craft he compensates for a fairly uneventful narrative by skilfully varying the layout and line length of his free verse and also by using some regular forms, both rhymed and unrhymed, including an example of the rarely-attempted Paradelle (invented by Billy Collins). Very importantly, the poems also remind us from time to time that Kennedy’s sense of humour has not been overwhelmed by the deep hurt at the heart of this collection.

In concluding I’m afraid I must mention that one noticeable shortcoming with this otherwise admirable book is its cover. No book designer is credited, as far as I can see; but the publisher’s choice does seem to me to be rather inappropriate. The musical butterfly and pseudo-comic font and layout for the title are quite at variance both with the author’s own remarks about wanting to avoid sentimentality and also with the mature and measured tone which he has actually achieved. I hope it will not mislead potential purchasers..