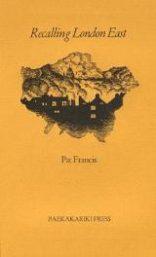 Poetry review – RECALLING LONDON EAST: John Forth admires the plain speaking in this collection of reminiscent poetry by Pat Francis

Pat Francis was born in 1931 in London’s East End. It’s good to see her collection of plain-spoken poems about an age and a region where there was plenty of plain speaking (‘they savoured words’) but where, in spite of the Passmore Edwards Library in Plaistow, ‘literature was distant’ (‘Family Story’). Her mother avoided mistakes in writing simply by avoiding words she couldn’t spell. It’s easy to understand how a child might grow up with a determination to speak for those who chose not to speak for themselves, in what she calls her posy for ‘hidden life, silent singers’. The 18 poems in the first two sections (‘Some Londoners’ and ‘Blitz) will make full use of juxtaposition, in one instance recalling Keats but in a different surround:

and, in ‘High Church, 1940s’ we hear of Conrad Noel ‘The Red Vicar’ joining the flock (Sinn Fein and Communism coming at two for the price of one) where already:

The child is a spectator, naturally, in a place where any forms of commitment were thin on the ground, and where ‘Uncle Fred’, having fought in two wars – who burned in Africa and froze in France – nevertheless: ‘had no language at all / to say how he felt’. Always there is an affectionate shortfall: ‘My thin-lipped aunt loved me / as much as her heart would allow’ (’Aunt Min’). And as a result the child grew up in a kind of deprivation: ‘Songs on the wireless/ taught her tears/ before the world/ taught her reasons.’ (‘A Child of the Thirties’).

Innocence can be a powerful antidote whatever the time or context, however, and the speaker longs for ‘Steel-tipped Boots’ – assuring us that if only her mother had:

Such expensive items were hard to come by, but anything her Dad could knock together was a different matter. An experiment with mimetic form makes its point succinctly:

During the Blitz she would read Addison & Steele in the Passmore Edwards Library, Plaistow E.13, while London burned:

In ‘Suburb and City’ she recalls ‘throbbing planes…pulsing…above their throbbing heads’ and in ‘Shelter’, in another of those juxtapositions:

‘Wolfboy’ is one of the most memorable poems in the childhood section – ‘Happily holding two jarring / thoughts in mind, I knew/ the boy in my class was a boy/ yet clearly he was a wolf’. Like any intelligent girl at the time, she is assigned to teach him to read until he dropped a match into the tank of an abandoned car:

And again, like any child, intelligent or not, she was sheltered as far as possible from harsh fact – being told by her mother: ‘You won’t want to go to the funeral’ – (of one who is unnamed but may well be Uncle Fred):

The final third of the book centres on two specific historical sources: Hector Gavin’s ‘Sanitary Ramblings’ (1848) being a study of Bethnal Green, and ‘Loughton Camp’ in Epping Forest which began life as an Iron Age hill-fort occupied by the Trinovantes. Meanwhile, and much later, back in old Bethnal Green the weavers were having a hard time mid-century when the need for hand-loom operatives diminished and their attention was turned towards growing food in the common gardens:

We are reminded also of ‘a factory in Hollybush Gardens’ (‘In Bethnal Green’) and the good doctor’s recording of: ‘eight houses one privy one tap one dustbin in Garden Place’ (‘Hector Gavin’). There’s a play on the mismatch of gorgeous names and squalid surroundings throughout. The strange bedfellows Marie Lloyd and Laura Ormiston Chant are ‘celebrated or forgotten’ respectively:

There’s more than a sense of Blake’s London poor from and for whom the forest at Epping emerges as ‘a place of refuge and escape’. High Beech, near the site of the former Loughton Camp, carries distant memories of Clare, Tennyson, Gurney and Edward Thomas – the latter pair stationed there during the First World War. Clare in the asylum wonders why Patty did not come to take him home:

Tennyson lived near the asylum when he began ‘In Memoriam’, its nature red in tooth and claw, where he sensed the vigour of earthworms:

Thomas and Gurney were posted with their regiments to ‘Suntrap’ and ‘Wintry’ camps respectively in June/July 1915 – both of which might be thought near-escapes however short-lived. Gurney was at home with ‘the Glosters, their voices/ scented with the Severn’ and Thomas ‘hid a notebook / under a magazine / and began to write…’ The speaker asks: ‘What had he got to leave / but language?’ Common to all poems throughout this collection is a reluctance on the part of the speaker to offer more than presented sketches. No judgements are made, though some are brushed against inevitably, and the same applies to the ink drawings by Jane Colling which accompany the poems. In fact Paekakariki Press, as a letterpress workshop dating back to 2010, is ideally suited to this marriage of word and illustration. The minutiae of detail works without seeking after resolution. Even so, a kind of ironic slant is hard to resist over forty-odd pages. The Iron Age fort at ‘Loughton Camp’ in just six lines serves as a gateway to the whole:

We learn in an epigraph that the place appears to have been abandoned around the time of Caesar’s first invasion.