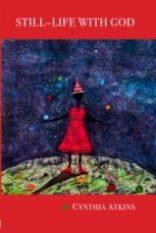 In Still-Life with God, Atkins takes us on more than an exploration, it is a quest. These are poems that pose questions and present a still life arrangement for us to consider. What are the relationships between objects. What is there and what is not and what about the gaps in-between? The poems probe the possibilities of something sacred in the now, the everyday, a relationship with God in many guises: “A wishing well/ A medicine cabinet/ A bullet/ An alibi.” We are drawn into dialogues and disputes about gender, body, illness, gun violence and mental health. Conflicts of inner and outer worlds, the personal and the communal including up-to-the-moment challenges of the twenty first century are brought out of dark closets. These are fragments gleaned over a lifetime, dealing with what has been taught, what has been learned and offering a reflection on the world and womanhood in all its facets chaos, struggle, triumph.
The 46 poems are arranged in four parts. Atkins’ voice is loud, bold even fierce, she assaults the reader with imagery that explodes like soap bubbles, like fireworks, like missiles. Layer upon layer of filo pastry allegory and metaphor, focus and re-focus her painful, apposite and over-arching themes.

Part one begins with the sonnet, ‘God is a Wishing Well’: “lit-up in the parking lot of my heart”, which kick-starts us immediately into the landscape we are to inhabit. Following on, ‘Hello Stranger’, calls us to reflect on human isolation.

I particularly liked, ‘Imaginary Friends’ which includes the lines

This is a head butt of a poem that fixes us clearly in our twenty first century world.

Part II moves on to a younger self, a lighter perspective and begins with, ‘God is a Treasure Hunt’ in which “I am a gawky kid jumping into a pile of leaves.” Atkins pulls us along those perplexing adolescent tracks of who am I? These are poems of identity and self-discovery. “My Persona“ is a teenage rant, a listing of the positive and negative, a shouting out of self-belief and self-doubt. The obdurate nature of self-reflection and trying to make sense is well forked over.

Part III takes us beyond the reflected self into the harsh realities of adulthood, where God might be found in a medicine cabinet, or in a library. There are powerful poems in this section that grapple with adult themes, grab you with heavily concentrated meaning. We see this in ‘House and Home’

And the theme is equally strong in ‘Domestic Terrorism’

The final pages contain a kind of modulation – moments of quiet reflection – and a Goddess appears, ‘The Goddess in Purple Rain’

Here there is a feeling of some reconciliation with the self, that some kind of still-life can be attained after facing one’s own demons and the demons of society. A search for the authentic self may bear fruit despite everyday contradictory evidence. This is a brave collection that ends with, ‘God is the Myth’ prompting again the question if he is or not?

These are complex poems, a roller coaster of themes, written with skilful imagery and conviction. The still life we are asked to observe and meditate on is sketched out in bold colours. Atkins uses language that is sensitive, emphatic, and impactful, every poem seeking the divine in the everyday. The power and the passion in these poems and the journey that you are taken on as a reader leave you in no doubt that God can be found in who we are, what we do and how we do it.

Tina Cole is a U.K. poet who lives in a rural area near the border with Wales. She has been writing poetry for many years. She has won a number of national Poetry competitions and her published poems have appeared in many U.K. magazines, collections and one in The Guardian newspaper. Her second collection will be released by Yaffle Press in 2021. She is currently doing an M.A. at Manchester University.