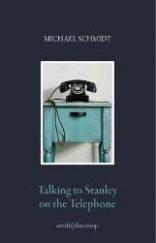 Poetry review – TALKING TO STANLEY ON THE TELEPHONE: John Forth enjoys his exploration of Michael Schmidt’s new collection

I need to put aside the streamlined authority of Michael Schmidt’s ‘Collected’ (2009) together with his anthologies, critical works and P.N Reviews before I can begin to look for an angle on his new collection. I’ll risk it, having first checked on a YouTube launch event of the book to pick up pointers. He delivers few sign-posts but, surprisingly perhaps, few are necessary. Occasional casual-seeming references to inhabiting other characters and voices were helpful, as is his love for Eliot’s Prufrock – though the latter is visible anyway in poems that display a passionate intellect with witty monologues. It’s good to see him finally getting on with his own work, and if that sounds like a school report, it feels more like being cheeky to the headmaster.

Two sections: ‘Before’ and ‘After’ with a ‘whole’ in the middle (his quip, not mine) leave us room to breathe. The opening poem, ‘Exceptions’, is Texas 1950 with a sign No dogs or Mexicans, its speaker relieved to find ‘They don’t mean us’. He is three years old and accompanied by his father. It reads like a gentle preamble written in syllabics:

The overdone burgers are suitably bland, middle-of-the-road, but the clinching stanza is pure menace understated:

It’s a nice set of imponderables (the place appears to admit two Mexicans and at least one dog) and it’s a fine start. We needn’t imagine we’re safe here; we needn’t think it’s going to be an easy ride. A more elusive context serves him well in the longer-lined ‘Running Away’ – a narrative revealing the thought-process of a serial escapist whose minders one day neglect to chase and bring him back:

It’s certainly one to go back to: there’s a real childhood there, shown in minute detail (‘the breast, the shiny spoon, the tub and the tepid water’) but the experience is universal; he’s an archetypal runner-away with specific requirements. The ending startles when his pursuers grow older and weaker, becoming moths following a light:

There’s another flight of fancy from the ‘books in childhood’ genre, where the book in question provides the poem’s title, ‘Alone with the Hairy Ainu’ by A.H Savage Landor. Again, the domestic detail is meticulous and the feeling of immersion total, but as night comes the boy’s thoughts wander:

An idiosyncratic child-voice combines with a sensibility merging the experience of reading with feelings of love and of loneliness. In ‘The Costume Party’ a moose and a witch agonise over the effect of their leaving early and have to face the fact that they might not matter much after all:

‘Walkie-Talkie’ has a speaker falling asleep after wasting time in an airport due to delay:

No human voices wake us on this occasion, and we can’t help noticing that the poems are light, personal and funny – in contrast to the twenty weighty examples chosen for his ‘very selected’ volume recently. We can hear him prioritising form over subject-matter (a line from the book-launch) but in a poem about being stranded in a train stuck outside Stockport we eavesdrop on a monologue that helps broaden his definition of form:

And speaking as publisher, or at least as office-worker, his bewilderment at modern techno-lingo is surely everyone’s (or at least those of a certain age) even if it is couched in the dark comedy of ‘The Lord of Aratta’ being hanged while trying to decipher the symbols on the earliest written peace proposal.

Bridging the end of the first half and the start of the second is a group of visceral interludes: ‘Mercy’ is a disturbing account of illness and suffering and the need to call spades spades; ‘Threes’ treats of a hospital experience (‘if you can pee / Three times – here are the three containers, numbered – /The cheerful nurse declares, you can go home); ‘The Bath’ and ‘To the Dentist’ confront aging at both ends, as it were, these last two being shorter, lighter poems about the physical effects of aging – all are frank and honest to say the least, and all are alert to the fears and vulnerability of men in their later years. There are a couple of poems offering a negative slant on couples and weddings (Tuba Mirum and Saint Thomas’s); a surprising dismantling of ‘church’ in ‘Sunday Morning’ and a sense in ‘Bedside Table’ of dissociation with all things physical or with just ‘things’:

Yet the experience of being a younger man is still very much alive in the dreaming, and ‘That’s what the book under the lamp should be about’. One of the sharpest poems, ‘Stanley and Me’ is indirectly pointed out in the book’s title and has an almost refrain – ‘Stanley’s got the big poems up his sleeve…’ and we once again hear of (this time) an ironic vulnerability: ‘How little / Can I make my poem out of? That scrap, this / Almost nothing?’ The idea is a reprise of one made earlier in the stuck train at Stockport, but this time with ‘A bright blob of Colman’s ablaze at the lip’. Sounds to me like a determination to exploit what’s there rather than leaving it to soak.

The book ends with a miniature epic featuring blind Homer, his early guides and later dog who conspicuously falls asleep during the reading: ‘Next summer/

…which has to be one of the slickest throwaways since Chandler, but it’s a satire on performance gigs where a contemporary ‘groupie’ longs to share the joys of hero-worship with old friends, in this case Miles Burrows and Stanley Moss. He says of Homer,

The narrator revels in dropping pearls of wisdom about Homer and the fact that Miles ‘read him in Greek at Wadham’ but this reader is a new man in a new age:

It’s all good fun, and the poem also has a relaxed and recognisable voice even wearing a mask. If Stanley Moss and Miles Burrows are the twin pillars here, then their distinctive uses of personae are present too. Each has a startling way with imagery and wrong-footing the reader, each emerges from a tradition that began with Blake and both are ‘soulful’ poets, though only Moss does God explicitly. More importantly, they’re iconoclasts in different but exciting ways, and important influences because what hasn’t perhaps, until now, been a strong focus in Schmidt’s poems is a personal presence. His epigraph to ‘The Love of Strangers’ (1989) was a quotation from Ford Madox Ford:

If (so it’s not a foregone conclusion)…cf may…and a picture (so not the real thing)…and sort of (maybe this world and time never existed). It’s a justifiable miniature of Ford, but I think we see real Schmidt (or a picture) scattered throughout this new collection – glimpses starting to emerge. A photo on the back flap shows the author sizing up a delectable-looking ice-cream cone. Cheeky, that. Like daring to eat a peach, and his glance at Sansom’s lockdown ‘haircut’ for the launch was priceless. You won’t be wanting to turn up here again looking like that, Smith-Doorstop, I thought. But they’re old mates, and the imprint is producing quite beautiful books, including this one.