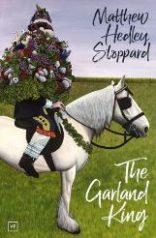 The collection’s cover shows a striking image of a man, his upper body thickly covered with flowers, riding a white horse. It points towards one aspect of this collection, regional folk customs and their deep roots. That, however, is only one part of these unsettling poems; the main focus is twenty-first century life in all its bleak and anxious reality. Stoppard lives in Otley (West Yorkshire) and not only observes the way individuals struggle to get by but also sees his own life reflected within this. Communal activity is combined with the constant demands of being a parent, trying to bring up two sons, making mistakes; it’s about the need to keep on going as the only way to survive.

Much of that survival depends on the grim humour which underpins his observation and description as he stares into the physical reality of everyday relationships. Folk traditions contain an earthy bawdiness and roughness, and his poems build on this as a way of confronting contemporary life. It’s a long way from the idealised, sentimentalised vision of Olde Englande that the idea of ‘folk’ sometimes epitomises. In ‘The Garland King’ the rider

OK so far, but hungover and retching, on a horse that has ‘had it up to the ivy with tradition’, he is also wrestling with the shame of the previous night—the casual violence he’d inflicted on the woman taking the role of the Garland King’s consort. His memory of ‘… dropping her voice/ in a urinal trough/ throwing her hand-held face against the tiles’ is in contrast with the surrounding scene—

It’s as though a camera pulls back for a panning shot while the poem stays with his viewpoint where the matter-of-fact violence is routine. Stoppard shows this without comment; it’s for the reader to recognise this and weigh up the context.

In ‘Whitsuntide dray restored and paraded through Clay Cross, 2020’ — the lack of excitement in the title is for ironic effect — Stoppard begins with detail. The new paint is yellow gloss – ‘dandelion smear when you wet the bed’, the weak pony requires ‘a sugar cube before each hill’, and the street is as un-festive as it could be – ‘empty/ except for a Kinder Egg capsule trodden/ into a dog turd’. Somehow, despite all this, the float manages to revive some community enthusiasm—

The procession teeters on the point of having a happy ending, as magical as the transformed pony, but that wouldn’t be reality in Clay Cross. At the procession’s finale—

What’s striking in these poems is the repeated clash between festive tradition, played out for tourists, and what is actually happening. Stoppard has found a format that suits his narratives; he uses a long line with snapshot images and an avoidance of conventional punctuation so that one detail runs into the next, all equal. Titles tell readers exactly what they are about to meet; ‘A mummer reflects on his child’s tumour’, ‘Family pet used as costume for a folk play’; the acting out of folk customs and the raw anxiety of family life run in parallel. In ‘Balter’ (which means ‘to dance clumsily’) a Morris dancer explains how ‘you couldn’t get a man-sized tissue between me and a breakdown before this’ and how the ‘the doctor says exercise helps with anxiety’. Dealing with mental pressure is part of everyday life, taken for granted.

Day-to-day family struggles are a constant thread, summed up in the line ‘the poor parenting decisions are waved away with a handkerchief or a smack/ of hazel’ where the line-break after ‘smack’ lets in the image of physical punishment. In ‘Well Dressing’ the poet is atoning for being ‘such a clueless parent’; in ‘I embrace the Burryman’ (a poem about a Scottish folk figure) childhood punishments surface from the past—

If these poems make for uncomfortable reading it’s only because Stoppard is reporting from the front line of what family life can be like. In ‘Discovery on the outskirts of Matlock’—another deliberately low-key title—adults hunt for two hours for their four-year-old son, lost in the overgrown ‘ruins/ of Arkwright’s empire and wild garlic hell’, his cries drowned by the noise of the river. The boy’s distress and their desperation are vividly shown; this is every parent’s nightmare made real.

Portraits of individuals are both objective and compassionate. In ‘A busker leaves the brothel on York Road’ a man steps out into an ordinary day—

but there is also a sympathy for his past and memories revived by this routine transaction; ‘never had there been such music in him’. Again, a title is often enough to sum up the whole poem: ‘The Virgin Mary, from the junior-school nativity, after inhaling aerosols’ is an unsparing depiction of the results of under-age sex and glue-sniffing, along with the society that allows it.

This is a strong and unflinching collection. Stoppard knows how to combine survivals from folk customs and what goes on behind closed doors when families are working to balance day-to-day survival with love. I was grateful for his humour, for the flashes of almost surreal imagery as much as for his determination to make language show the truth about lives of quiet desperation, where each day is a balancing act. Stoppard shows his readers a real, vivid, messy society; these are compelling poems.