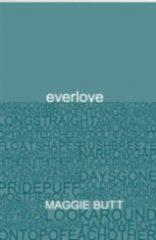 Sometimes a book of poetry alights at the right time, its mood perfectly capturing the moment. Maggie Butt’s new collection everlove is just such a book.

The collection is divided into three sections, Torn. The Fallen, and Fjording. Torn is inspired by the American painter Mary Behrens and her series of distorted and reassembled photographs of refugees. (It is, however, a shame none of the images have been included in the book.) Butt’s poems are similarly fragmented, words and sentences are often repeated, cut-up and put back together again.

This has an unsettling affect; the narrative appears disjointed and out of time, like the refugee experiences she writes about. These are stories that are only half caught, they are both here and not here, a life blown between two worlds.

The poems have stark one word titles like “Toil”, “walk”, “shoes”; and Butt’s gift is to find the smallest words and things – a shoe, a sofa, an item of clothing, a bowl of rice – to explore the bigger picture of a land flooded, a family dispossessed.

Butt also likes to squash words together in linguistic experiments.

This creates an urgency in the poems. Later on in the collection she will use the same device to a different effect.

The second section The Fallen has an ecological theme. I liked “A History of Stuff” which starts out as an inventory of suburban life, told through a series of film- like images.

Later Butt takes a darker tone, panning out to reveal the larger world impacted by all this ‘stuff’.

Other poems zoom in and out of smaller and larger narratives. Weather storms through these poems – blizzards, hurricanes, snow. A group of homeless people (or are they angels?) huddle around a fire , talking in tongues of fire and ice.

Mythology and magic weave through this section, but Butt has a light touch, so nothing feels overstated. There are poems about wisdom of aging, the beauty of a repair shop, the importance of keeping and mending our splintered world, whether that be through a witch’s spell or a child’s protest to save the planet.

In the final section Fjording, Butt brings together that which is lost: ‘everything has to be somewhere’ she tells us in the title poem “everlove”, ‘for instance that lost earring widowed from its partner.’ Don’t you love that phrase?

Butt’s fondness for the linking of words has the effect of gathering up fragments and sewing them together to create something new and beautiful. Examples like ‘oppositeshore’ ‘floatshapes’ ‘swimssofar’ occur in poems about water, swimming, landscapes and the language of song and love. These are things that bind us all together.

Here is a poem in its entirety. It’s a pure stripped back ode to the simplicity of life.

I am reminded again of those reassembled photographs. This is what Butt is doing here with this collection, piecing together the fragments, creating something original and arresting.