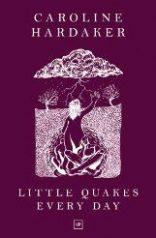 Caroline Hardaker says of her collection: “I wanted to explore the nature of discoveries and how they impact our daily lives. One of the main topics I write about is memory and cultural memory, and I wanted to explore how folklore and history are repeated throughout time ( …) I’ve balanced these larger questions with everyday ‘kitchen sink’ encounters to demonstrate that both have a huge impact on our lives.”

This first full collection is an intriguing mix of simple personal narratives, poems with a historical biographical context and poems rooted in mythology and ancient history. It is divided into three section: ‘Histories’, ‘Discoveries’ and ‘Inventions’. The Histories section includes references to myths and legends of a variety of cultures from the Celtic to Buddhism, but also includes personal histories, like the story of Mary Anning, and a reimagining of a tea party with Thomas Edison and his in-laws.

The collection title is taken from the last line in ‘Taxonomical Divergences in Madagascar’ (p43). Hardaker considers the importance of change both in terms of the fifty nine forms of chameleon found on the island and the way change is embedded in the foundations of the earth and the tectonic plates that lie so close to the surface, shifting slowly but constantly and producing ‘little quakes every day.’

In the first part, ‘Histories’ the poem ‘Pterosaur’ tells some of the story of Mary Anning, (1799 – 1847) a female palaeontologist making a living from exploiting the fossils in the Jurassic beds of the south coast. Besides selling the fossils, she also made important scientific discoveries; but as a woman in a world dominated by male palaeontologists, she struggled for recognition in her lifetime. Hardaker creates a vivid picture of an apparently eccentric lady exploring the coastline:

She is also portrayed excavating an early albatross nest:

Anning’s discoveries were reported to The Geological Society, but she received no personal recognition. It was Anning who developed the theory of ‘bezoar stones’ that were sometimes found in the abdominal region of ichthyosaur skeletons, and realised that they were fossilised faeces and suggested so to her patron Buckland in 1824. When Buckland presented his findings on ‘coprolites’ to the Geological Society, he mentioned Anning by name and praised her skill and industry in helping to solve the mystery. (Wikipedia)

‘Testimony of a Witch to Hang:1614’ is an altogether darker poem, a dramatic monologue from an unnamed witch speaking in her own defence. She argues that much of the witchcraft she is accused of is simple herbalism, aimed at curing the sick:

She boasts that she can ‘soar and mount the air’ but ends defending her innocence:

‘Siddärtha hears a song performed by a travelling musician.’ tells the story of how the man who would become the Buddha, Siddärtha, decided to leave his palace, his wife Ya?odhar? and his week old son to seek enlightenment at the age of 29. The poem is a conversation between Ya?odhar? and Siddärtha, cleverly written for two voices, with Ya?odhar? left aligned and in a normal typeface, whilst Siddärtha is right justified and italicised. It recounts how he tells her that he is leaving. He says the song ‘catches the tail of the dove that sleeps / perched on my rib, and awake he quivers, eyes open’

To Ya?odhar? the song is ‘a mountain song, breathing cold loneliness into the palace. / Of places where rain is rain, not lotus blossoms birthing falling flowers’ She goes on to say:

Siddärtha is not to be deterred. He says the song ‘tastes like tomorrow, and the inbreath of the king in quiet, / the hang after a fall. I will taste the bitter fruit, Ya?odhar?, to know the sweet.‘

One of the poems in Part 2, ‘Discoveries’, is very different from most of the poems in the collection. Entitled ‘And here’s to lots and lots of days’ it is dedicated for Holly. It is more of a narrative and appears to link to a (presumed) daughter leaving home. The poem is second person poem not unlike a homily, which reminded me of Polonius’ advice to Laertes. The opening is positive and supportive:

The following stanzas detail a range of experiences that Holly may have: people trying to change her mind, acquiring and sorting out knowledge, uncertainty in a search for freedom. There are memorable lines here:

Part 3 ‘Inventions’ has a mix of poems, from the Greek referenced ‘Mnemosyne’ to the everyday story told in ‘Taxes’ . This poem looks at the life of a fiercely independent ample grandmother:

This is a portrait of a woman refusing to be bowed by events and disdaining the help of the state in her stubborn independence, even up to her death:

I had mixed reactions to this collection. I appreciated the quality of the writing, though I found some of the poems inaccessible. Fortunately the collection is well annotated, which I found essential, having little knowledge of Celtic mythology or ancient history. At first I found my lack of knowledge a barrier to my enjoyment, but reading the commentary and doing a little research into the topic helped me see the poems with a clearer vision, so that I was able to get the best out of Hardaker’s collection.