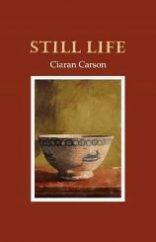 Long lined, highly digressive meditations on paintings, largely by Old Masters, will not be to everyone’s taste. However, anyone who knows Carson’s work will know that he’s a master of focused concision when he wants to be. And these aren’t by any means just poems about paintings; thoughts about the paintings are interwoven with memories they bring to mind and side-glances at the poet’s immediate circumstances, his treatment for terminal lung cancer, his partner Deirdre and their little routines, changes in the neighbourhood. In fact the digressions make a vital contribution to a larger artistic purpose. We’re constantly aware of the contrast between the drifting, fleeting, momentary thoughts of the poet, living and dying in time, and the non-living stillness of the works of art he reflects on. The whole way in which these poems are made dramatizes this difference. This of course involves a certain sleight of hand. The illusion of a spontaneous stream of consciousness is itself an artistic construction. And of course the book invites response on different levels, just as the speaker within it presents radical shifts in his own way of seeing given pictures. It’s very personal, a moving reflection of the end stage of Carson’s own life and his thoughts as he approaches his end. It’s also, in more impersonal way, an exploration of the relations between enduring works of art and ephemeral life, easily related to poems like Keats’ ‘Ode on a Grecian Urn’.

This is the beginning of the first piece, ‘Claude Monet, Artist’s Garden at Vétheuil, 1880’:

As printed, each line is divided into two parts (‘hemistichs’ or ‘half lines’), with the second part indented. Reading with the eye, there’s inevitably an interruption of the flow when one gets to the internal line division. Often this helpfully underlines the way thoughts flit in and out of consciousness, conspicuously so in the second and third lines, from ‘Listening’ to ‘threshold’. At others, I feel I would have enjoyed the line’s sumptuous unrolling more fully if it had been allowed to continue unbroken to the end of a wider page.

Rereading that opening a little more slowly we see how dense it actually is, how sensitively pace and rhythm are controlled and how carefully phrases are framed between spaces and pauses to bring out their weight:

Reading the poem, our ‘today’ is no longer the today of its writing. The poet is no longer ‘here’ or anywhere, he no longer is except in the traces he’s left behind him. So the fundamental theme of the book is sounded quietly, as if incidentally, but very clearly right at the beginning. The rapid, throwaway flow of ‘Today I thought I’d just take a lie-down’ makes it seem like a splinter of spontaneous, unpoeticized life. Then a comma slows things down, framing ‘and drift’. And finally, though ‘So here I am’ is technically just the tail of the first line, Carson has made it look like a whole line on its own: the full stop after ‘drift’ means that ‘So here I am’ begins with a capital as a new line would. It’s a modest enough statement, but it’s highlighted in a way that encourages the reader to pause over it, to turn it in the light, to feel how it’s both poignant, because the speaker is no longer physically here, but also quietly triumphant because thanks to his art he is here in another sense as we read.

No mention of Monet’s Garden so far and not for a long time yet. When a brief mention of the picture’s contents does come it’s via thoughts about the many shades of yellow and about the etymology of the word ‘daffodil’, themselves prompted by an event in the yesterday of the poem when a vandal overturned the pot of daffodils growing in the poet’s little front garden. At the time he was looking for a book, James Elkins’ What Painting Is, to find a passage about all the non-representational stuff that gets into a painting and can be revealed by powerful enough magnification – not only physical detritus, brush hairs, the painter’s own hairs, the pollen count of a particular day in the open air, but also the way the brush strokes created by the movements of the painter’s hand reflect the movements and state of his whole body with its ‘inner feelings’ and ‘the fleeting momentary awareness of what the hand might do next’. In this way, ‘below the threshold’, one might say, looking back to the beginning of the poem, ‘everything gets into the painting’. Similarly, the poem we’ve been reading follows the mental processes that led him towards thinking of Monet’s painting, lead him away from it and back to it, and is invaded by random moments of attention to his immediate circumstances. Because the mind works by association the poem becomes an echo chamber, the yellow of his upended daffodils reflected the sunflowers of Monet’s Garden at Vétheuil, his own nearness to death in his description of Poussin’s holding out a handful of marble and porphyry chips and saying “‘Here’s ancient Rome’”, the thought that the word ‘daffodil’ derives from ‘asphodel’, ‘the flower of the underworld’, and the reference to tombs in a Poussin painting. ‘Echo chamber’ is misleading, though, because as one reads the sense is not of enclosure but of how energetically thoughts branch out, finding themselves more and more as parts of a larger whole. The end of this first poem explicitly contemplates the nearness of the poet’s death but does so in an extraordinarily serene way, almost in passing:

How wonderfully that lives in time, in the present moment of writing – ‘It’s beautiful weather, the 30th of March, and tomorrow the clocks go forward’ – and how wonderfully it both transcends time and dissolves the distinction between art and life in the lovely lines describing the scene evoked in Poussin’s Landscape.

There are seventeen of these poems, most several pages long, with the track of the poet’s thought wandering between the painting the poem is named for, his immediate circumstances, and his own life memories called up in different ways. The thoughts and occurrences registered can be trivial, like that vandal’s upending of the daffodil bowl. I can imagine readers losing patience before they’ve given the poems time to catch fire in their imaginations. You need to tune in to them, to let yourself be carried on the stream of the poet’s consciousness. The stream will carry you through moments of luminously intelligent perception and moments when mundane reality suddenly takes on an almost visionary descriptive radiance. However, I think the poems are most deeply original and have their greatest value in the movement between such moments, and in the impression we’re given of accompanying a very intelligent, erudite mind through its spontaneous wanderings in real time and its noticing and absorbing of small, interesting details at a point when its time is running out.

The last few lines of the last poem eloquently celebrate how the eye of love gives value to or finds the value in the little things that make up most of life. The poet is remembering an old flat that he lived in forty-odd years before, in a building painted by James Allen in around 1979

In an almost Proustian way, this reawakening of a moment in memory transcends time, poignantly so in the mind of a man near death. The last line seems to me extraordinarily beautiful. It has a majestic sweep befitting the way it sums up what we’ve been seeing all through the book: the poet’s acute responsiveness to everything around him. It’s another example of the delicate effect Carson can obtain by dividing his very long lines. Write it without that inner break – hear it as an uninterrupted flow – and its majesty becomes marmoreal, swelling to a ringing final flourish. Spaced as printed it becomes more nuanced, more equivocal. Guided by the eye, the inner ear hears a hesitation before ‘beyond’, and, it seems to me, a dying fall in it. After all, the poet’s response to the world is now different to the simple, thrilling ardour of youth which he can vividly remember but no longer quite recapture; and especially when we bear in mind that he’s dying, ‘beyond’ now carries a poignant sense of its being ‘out of reach’.