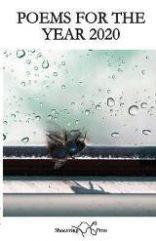 POEMS FOR THE YEAR 2020: Neil Fulwood surveys a well-timed selection of poems reflecting a complex year, well-curated by Merryn Williams

To describe 2020 as the year of one specific thing – the plague year, the year of lockdown, the year we all stayed at home – is as reductive as it is fallacious; nevertheless, tabloids and lowbrow pundits trade in such descriptions to the point of cliché.

2020 was the year of many things: political ineptitude and naked cronyism; media hysteria and mixed messages; furloughs and the continued efforts of keyworkers; a small but noisy movement of Covid-deniers seemingly happy to risk their own and others’ lives in the name of personal freedom. It was the year that social distancing paradoxically reinforced community spirit. The year when millions clapped for the NHS while an opposition party “critically supported” a government that made just about every mistake possible. The year that put Barnard Castle on the map.

And it hardly needs saying that 2020 was the year that screeds of poetry were written, some of it for private consumption as those suddenly experiencing free time courtesy of the Job Retention Scheme found ways of expressing themselves while filling the hours (others did the same to combat loneliness and cultural starvation); but much of it put out into the world on blogs, social media, via online magazines and in print publications.

A slew of lockdown collections and anthologies are imminent. Some are here already, and – mea culpa – this reviewer’s forthcoming book draws from work produced whilst on furlough. Under consideration right now, though, is Merryn Williams’s thoughtful anthology from Shoestring Press. Williams has done a lot of things right but made one crucial error of judgement, so let’s get the carping out of the way before we revel in the good stuff.

Following a two-poem introductory section titled ‘In the Beginning: China, South Africa’, Poems for the Year 2020 settles into a ‘Rest of the World’ section which occupies the book’s remaining 88 pages and rigidly follows an alphabetical-by-author’s-surname structure. This both denies the emergence of a dialogue between several tranches of poems which almost beg to be grouped together, and creates some awkward segues, particularly those between Mona Arshi’s reflective ‘Driving’ and the blokey seaside humour of Adrian Barlow’s ‘Betjemania’, and Stephen Wilson’s ribald ‘Limerick’ and Gregory Woods’s quietly dignified ‘Lockdown’.

On the plus side, let’s start with the always capable Woods. Any anthology featuring his work will immediately have something to recommend it, and here he bolsters a contributors’ list which includes David Tait, Vicki Feaver, Alison Brackenbury, Angela Kirby, Owen Gallagher and Keith Hutson. Hutson’s contribution is ‘Thought for the Day’, one of his trademark made-it-look-easy sonnets, which satirises the vapidity of the eponymous radio programme:

The anthology offers a comparatively small percentage of satirical work, yet these number some of its best poems: Paul Stephenson’s hilarious parody of William Carlos Williams’s ‘This is just to say’; Janine Booth’s ‘Hancock’s Half Hour’, which pays off with beautiful concision in its closing lines; John Lanyon’s gut-punch untitled haiku; Serin Thomasin’s brave calling out of virtue-signalling hypocrisy in ‘Round of Applause’; and Jill Hadfield’s ‘Geoffrey Chaucer Cleans the Beach’, an inspired riposte to lockdown rebels that remains my favourite poem in the book.

Fewer still are the poems where satire ignites into righteous fury (readers looking for a volume that gets its mad up about Johnson, Hancock, Cummings et al are directed towards the 265 piss and vinegar soaked pages of Martin Rowson’s Plague Songs from Smokestack Books). While Williams does include two poems specifically about Dominic Cummings’ Barnard Castle jaunt – one effective, one not – there is little appearance elsewhere of governmental figures. ‘Emergency Powers’ by Paul Francis references Hungary’s Orban and some of the US’s less constitutional moments to pinpoint legislational dangers, while the icy self-control of Anathema Jane McKenna’s ‘Ten Hillsboroughs’ delivers a j’accuse that doesn’t need to name names; these are the best of this subset, and two of the anthology’s absolute stand-out pieces.

The minority theme – what one might call, for want of a better description, the virus personified – runs to just three offerings: an untitled piece by Clive Perrett which posits Covid-19 as God’s revenge for global warming (nonsensical when one considers free will and the Almighty’s post-Babel non-interference agenda); ‘Greta’s Wish’ by Patrick Osada, the pay off of which, while well-meaning, is a little too hasty in its execution; and Paul Groves’s ‘Invader’s Song’, which demonstrates how to take a contentious viewpoint and create something artistically valid and thought-provoking.

The main themes emerging from Williams’s selection are solitude, reflection, quietness and the re-ordering of one’s days. Working from home doesn’t seem to feature, while continuing to perform one’s duties as an essential worker is evoked as imaginative sympathy or via family members (as in Feaver’s ‘Threads’, addressed to her anaesthetist son) rather than as lived experience.

Still, quietness is a fine aesthetic choice when dealing with a global catastrophe that has claimed so many needlessly taken lives. Outrage can often be hysterical, eulogies mawkish. Williams rigorously avoids cheap sentiment and histrionics, an editorial mandate that proves to be Poems for the Year 2020’s greatest strength.

There is more – much more than a single review can encompass. Just to name and quote a snippet from each of the eighty poems Williams has chosen would push this article to an ungainly length. While lockdown anthologies began to emerge even during the first half of 2020, Williams has been wise enough to see the year out and allow for a period of reflection before unveiling Poems for the Year 2020. Buoyed by the understated yet elegant production values typical of Shoestring, it’s a rewarding volume, intelligently curated, that stumbles only in the missed opportunity of its structuring.

Eating the Sun Arrival at Elsewhere