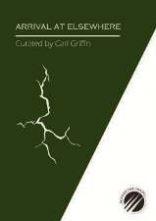 ARRIVAL AT ELSEWHERE: Rennie Halstead investigates a poetic compilation curated by Carl Griffin which explores the experience of lockdown using many different voices

Arrival at Elsewhere is an unusual book, curated by Carl Griffin, that explores the experience of lockdown at the beginning of the pandemic using fragments contributed by a large number of other writers. Griffin writes in his introduction that he wanted to create a book length poem. He says

The editors from ATG describe the book as a:sensitively crafted winding path of a poem from all our tongues.

At first I thought the patterns created a linearity in the poem, but I don’t think that is the best way to look at this collection. It’s more like themes in a symphony, or in a film score that recur each time the character returns to the screen. For me, there are four themes.

There is a sense that the normal world is slowly winding down. The opening seems almost everyday (p1):

We meet a pregnant woman out for coffee:

But the disconnections begin immediately. The conversation with the woman becomes fragmented, and the beginning of isolation emerges on p7:

A second theme is the effect of lockdown on wildlife. As people withdraw to their own homes, images of wildlife fill the emptiness, so the dragonfly (p8) is:

In the silence the moss can be heard ‘creeping’, and ‘Beauty hurts as much as pain’. (p14)

As people become increasingly isolated and disconnected the imagery shifts again. The organ in a deserted church (p44) ‘sits idle in its moorings, / its music dormant in the pipes.’

The isolation affects people’s mental health, so that on p64 the poet has ‘lost the shape of my days, // of my clothes, of all / that is holding me up.’

By p66 the loneliness has become a gnawing grief:

and by p68 the wolves have turned into demons, so that the poet’s main fear is that:

The imagery becomes darker as we focus on the inevitable outcome of the pandemic. The carrion crow (p20) becomes ‘a beaked plague-doctor, / […] waiting for his work to start’ and the animals also become wary, developing: (p39)

On p87 the poet writes of his father who:

The book is prescient as we continue to experience lockdown well after the completion of this volume in May 2020.

The book ends on a bleak conclusion:

Griffin asserts that this is a book length poem, but it might be more accurate to focus on the fragmentation that the book documents, reflecting the way society and people’s lives have been affected by the pandemic. This is not a book to read in one go as if it was a long narrative like The Iliad. It is a collection of fragments, with many beautiful examples, perhaps more in the tradition of The Waste Land. I’m thinking of the very end of The Waste Land, where the Fisher King continues fishing whilst the world around him disintegrates:

Our arid plain is the physical, social and emotional landscape of the pandemic, and like the Fisher King all we can do is try to create our own sense of order.

The book is an accumulation of impressions shaped by the varied experiences of Covid from the contributors. Ninety-seven poets sent Griffin poems and fragments to stitch together in this collaborative experiment. One contributor, Sarah Westcott (2020) describes the process as a liberating and joyful experience. She describes how she made notes and jottings, and saw the work as more of a process than the production of a completed finished and polished poem.

Contributing poets had widely different experiences. Some had sequences of eighteen lines included on one page, a poem more or less complete. Others found their contribution cut to a line or half line, scattered through the volume, or closely edited and reinterpreted by Griffin.

You have to take this collection on its own terms. It’s different from the usual themed collection, and the fragments are skilfully stitched together. It is full of strong writing. There is a list of contributors at the end of the collection, with each poet’s contribution appropriately credited if you are keen to find the author of a particular section.

Poems for the Year 2020 POEMS IN LOCKDOWN