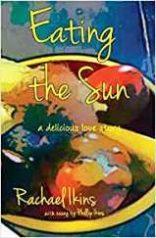 Subtitled “a delicious love story,” Rachael Ikins’ Eating the Sun combines memoir, poetry and recipes to cook up a compelling story of lifelong devotion – two people to each other and to a simple, healthful lifestyle. The book is constructed around the cycle of the seasons. Each section – “Spring,” “Summer,” “Autumn,” “Winter” – starts with a prose narrative about her life, principally with Philip but also growing up in upstate New York, then follows with seasonally themed poems and recipes (zucchini and pumpkin in autumn, for example, winter goulash and pizza in winter). The whole book is illustrated with photographs of people, places and Ikins’ paintings.

and then continues a few verses later:

“As Summer Falls Away,” “Late October“ (“Dawn wakes with its eyes closed. / Fists of wind scrub leaves’ color / from naked trees. Autumn silence.”), “Pumpkin Vines” are among the poems in the “Autumn” section. “Blizzard Magic,” “Polar Vortex” and “Prelude to Winter” (“Coyotes ululating to half moon, toad a fisted prayer on a windowsill”) are titles in the “Winter” section.

But it’s the love story that anchors and animates the book. In a sense, the pairing is “star-crossed,” as one back-cover blurb describes it, Philip being thirty years Rachael’s senior; but the marriage lasts almost a quarter of a century before Philip’s death, longer than many, and by Rachael’s account it is a coup de foudre, love at first sight. Philip is a thoracic surgeon, and they meet when Rachel is his patient. As she tells it, he literally touches her heart when he removes a cyst from her lung.

Inevitably, there are problems along the way, some financial, others health-related (heart disease, cancer) as Philip enters his eighties, conflicts with family members, but as Rachael reflects,

An initial section entitled “Before Spring” includes a poem about her mother’s cookbooks – Fanny Farmer, Irma Rombauer’s Joy of Cooking, Julia Child – and sets the tone of food and family. The delightful poem, “Memorial” begins:

Like “Before Spring,” a final section entitled “Love Endures,” bookends the cycle of the seasons. In this concluding section, Ikins recounts an encounter with a neighbor the year after her husband’s death. They are both collecting their mail from the apartment complex mailroom. She has just won an award for a painting that appears in a literary journal, and she is proud to show the stranger. The gentleman notices her name and asks her if she is by any chance related to Philip Ikins. He had known Philip when he was an operating room technician and her husband was a surgeon. “I loved that man,” he tells her. She writes:

Indeed, part of Ikins’ life story in Eating the Sun is her career as an artist and poet the encouragement and inspiration she receives from her husband. The final poem, “Question,” written 8 years after his death, recounts one of those waking-up experiences we all have, locked in a dream that seems as real as wish-fulfillment, our dead still with us. Philip is alive and she asks him to feed the cats and let the dogs out. She addresses her husband in the poem, speaking to him in the present tense. He seems so alive!

Eating the Sun is both a tribute and an inspiration. Love endures.