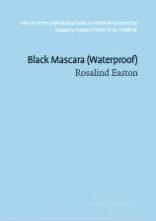 Black Mascara (Waterproof) was a winner in The Poetry Business Pamphlet Competition 2020 judged by Imitaz Dhaker and Ian McMillan. Here, the judges selected an engaging collection of poems that are friendly and light-hearted in tone, using their humour to take a fresh look at serious or taboo topics. The opening poem, ‘Found in Translation’, is a gentle introduction, dedicated to a grandmother and starts,

In a few lines, the poet has created a lover of words who is mischievous – the jumbled books – and fun to be around, someone who’s prepared to bring the party if no one else bothers. This grandmother was also an actor and full of stories, as the poet reads the slim volume,

It’s not clear whether the story is true, but its telling is entertaining so you want it to be. The details feel right: the star plucked from obscurity; the colourless photographs suggesting serious, worthy roles alongside revered actors; the round of chat shows and red carpets ending with the retrospective on an obscure BBC channel rather than the pizzazz of Sky Arts; and finally a woman confident enough (or at least sufficiently in control) of her own story to write it herself. The poem doesn’t end there, but to quote more would be to give spoilers.

‘Did I Dent Your Car with My Head’ is inspired by Caroline Criado Perez’s ‘Invisible Women: Exposing Date Bias in a World Designed for Men’ and reverses the genders,

It’s a world where carers are more valued than football stars. However, on discovering cars were designed for the female body, manufacturers change the design. Of course it’s wishful thinking that manufacturers might consider including female bodies in their designs and all too credible that they would recall and redesign on discovering that men were more likely to be killed. So, to be true to its purpose, the redesign shouldn’t happen… however, the faulty logic serves to darken the tone of the poem.

Elsewhere, ‘Richard Burton and Elizabeth Taylor Take Over the Academy’ imagines the latter buying off Ofsted inspectors with her “more ordinary diamonds” and the former concluding he’d make a better drama teacher than his interviewees. ‘Backstage’ is an effective specular, where the second stanza is composed of the same lines as the first but in reverse, looking at an actor wiping off her greasepaint and wondering who she is offstage.

The title poem has make-up as war paint, “as though going into battle/ with the love you tried to hide” (this comes after a poem “Closet” about not coming out as a lesbian). And there’s a lost love here,

It’s the loneliest kind of heartbreak: one that can’t be shared and is endured in isolation. The mascara’s not very sympathetic, bluntly telling the addressee not to hide her tears and keep secrets, but rather to be honest and come out at least with an admission of heartbreak.

Black Mascara (Waterproof) is lively, engaging and fun to read. Each poem creates a story and hints at depths below the surface – discrimination, fear, the isolation that keeping secrets brings – so re-reading is rewarded. It’s like a fun night being entertained by friends sharing a bottle (or more) of wine and waking up, not with a hangover, but a sober recognition that underneath the jokes some serious confessions were being made.

POEMS IN LOCKDOWN CLOSING TIME AT THE ROYAL OAK