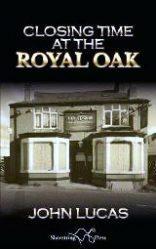 CLOSING TIME AT THE ROYAL OAK

CLOSING TIME AT THE ROYAL OAK: Richie McCaffery admires the way that John Lucas has embedded perceptive social observation in a history of his local pub

There was much interest in this book when it was offered for review at London Grip but it ended up being assigned to me. This couldn’t possibly have anything to do with my rather a posteriori knowledge of pubs, taverns, howffs, hostelries, toping houses and estaminets, could it? I need to emphasise that this captivating book, Lucas’s love-letter and elegy to his favourite backstreet boozer in Beeston, Nottingham, is not the sort of dreary, niche, quasi-mythologised account of pub-life and drinking (pace Soho, Fitzrovia, The Colony Room Club etc) that only appeals to those of a pub-going and bibulous bent themselves. This book has a much more universal, or at least national, application.

What Lucas does most effectively is use the changing fortunes of a working-class pub and its motley habitués over the space of half a century as a barometer for wider social and political change across the country, from the 1960s to the present day, this grim epoch of global virus that has been a death knell in so many ways. Lucas talks of a time when working people had set hours and routines and could separate themselves from the workplace with the place of craic and leisure, the pub. Now, such people work from home (if they can…) and are expected to do so all day long, without even the possibility of visiting the pub; the demarcation of where the workplace begins and ends has been completely erased. The subtext of a lot of what Lucas writes about seems to suggest that ‘progress’ – as we are sold it by politicians to justify ‘development’ and ‘modernisation’ – is just a myth. We might well make scientific, medical or technological breakthroughs, but do these really enrich the fabric of our lives? I’m thinking in particular of the curate’s egg that is the internet age.

Some writers have responded in horror to the changing face of their world in the latter part of the 20th century. The Orcadian poet and writer George Mackay Brown retreated into an ancient, ahistorical realm of Vikings and skalds as a way of coping with that upheaval. Lucas, by contrast, is a realist and he has chronicled his life and times (as well as his fellow pub travellers) candidly through the prism or microcosm of one small, unassuming pub. The pub is a means of escape, but Lucas uses it to confront some of the uglier expressions of the changing political climate. We see the great unrest and discontent in the community caused by the Falklands War and the battle-lines drawn between those who remained mortally opposed to Thatcher, and those who did a volte-face and began to support ‘Maggie’s Boys’. Lucas memorably describes the wolfish avarice and mindless jingoism of 1980s Thatcherism as licensing ‘a new, unlovely bullishness’. At another point, as if to apologise to the reader for the internecine politics, Lucas points out that ‘it was a strange time’ but what really jars the reader is his use of the past tense.

But this book is not a dry or partisan political-historian’s study. Its real focus is vibrantly sociological – it teems with life, with colourful characters and funny stories. Each section of the book ushers in a new regime at the pub and while there is a sneaking sense that the pub is in decline, there is such a rich broth of human interest served up that the reader barely notices until it’s all too late and last orders have been called. So many anecdotal accounts of bygone pub life (such as John Fothergill’s charming An Innkeeper’s Diary) have a decidedly rose-tinted hue to their prose. And while there are many fond evocations here, Lucas avoids being your typical garrulous pub yarn-spinner precisely because he does not make himself the protagonist of his story. He is, to quote Burns, the ‘cheil amang you takin notes, / And, faith, he’ll prent it’. Take, for instance, the pub ‘wiseacre’ (know-it-all) whom the publican (Chris) wants to take down a peg or two by putting him on the spot with a trivia question:

Lucas also recounts a very funny anecdote about the Scottish poet Robert Garioch (1909-1981), when as a young man Lucas found himself in the Abbotsford in Edinburgh, one of the ‘command posts’ of the Scottish literary renaissance:

I’ve never before heard of the quiet, retiring Garioch – who was often too thrifty to buy drinks and instead smuggled his own bottles of beer into a pub in his Gladstone bag –‘holding court’, let alone the comic madness that follows. I’d have expected this sort of behaviour from his much more rumbustious friend Sydney Goodsir Smith. Lucas’ account adds a whole new dimension to my appreciation of Garioch.

One of my chief worries when I opened this book was that its worldview or outlook was going to be outmoded. Any discussion of post-war pub life is inevitably a masculine, hegemonic discussion. Lucas writes that the pub was largely a male terrain, though he began to notice the presence of women from the mid-1950s onwards. By the 1970s, his pub ‘The Royal Oak’ was fairly evenly mixed between the sexes. There is in particular one horrific account of male-on-female alcohol-fuelled violence in this book that shows that for the appearance of greater gender fairness, women were still the target of a brutally toxic masculinity. But Lucas makes his views clear when he talks about a gifted postgraduate student married to an odious philanderer who expected his wife to be faithful:

This is a book that begins in optimism – a young English literature lecturer in the 1960s moving his family to a big house (ironically an ex-Methodist manse) and finding a very hospitable pub around the corner. But it ends in bathos, loss and stagnation – the pub changed beyond recognition into a restaurant that has also closed down and is boarded up. The character not only of the pub he loved is irrevocably gone, but so too is the high street with its distinctive shops. Behind the abandoned pub looms an enormous super-market.

This is both symptomatic and symbolic of what has befallen much of Britain in the never-ending march of development and gentrification. I can vividly relate to Lucas’s sense of bereavement at losing his pub. Even if a building like an old inn is listed now, it’s no guarantee it won’t be gutted and ruined by new management in the interests of the almighty dollar, the omnipotent pound. In the village where I grew up, my local was a very unpretentious, levelling place where every section of society was welcome. It went years ago and is now a bourgeois tearoom catering to the tourist market, and in fact most of the houses in the village are now holiday lets. When I hear the words ‘progress’ and ‘gentrification’ I also hear their deutero meanings ‘conformity’ and ‘sanitisation’ and I suspect Lucas hears, and sees, them too. But perhaps I’m ranting too much now like an old pub bore…