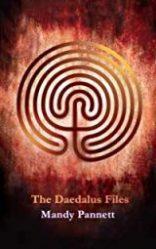 The fact that Mandy Pannett has published two novellas as well as five previous poetry collections implies an interest in storytelling that is clearly evident in The Daedalus Files. As she reminds us in a preface, Daedalus’ story is one of extremes, from the heights of human invention and creativity, to the despair of his son Icarus’ notorious death. It provides a focal point for her concerns with major themes such as the extent to which creative endeavour has any true or lasting worth, and the ways in which technological inventiveness has often proved to be a coin with a negative, often dangerous side.

The title of the first poem, ‘The Black Sail 1’, references the ship carrying innocent young Greeks to be devoured by the Minotaur, implicitly inculpating Daedalus, because he was the designer of the wooden cow in which King Minos’ wife Persiphae lay so that she could mate with a bull she lusted after, thus conceiving the hideous monster. In an immediate statement of straight-talking intent, Pannett does not flinch from the sufferings, ancient and contemporary, that power and cruelty can and do engender, although here they are ironically expressed in negative form, by way of contrast with the connotations of the word ‘leaving’:

The next poem, ‘Strange Things, Maker’, Daedalus brings out our protagonist’s more admirable facet, presenting him as ‘an extraordinary maker / of strange things’, whose reported power extends not only to creating great sculptures but imbuing them with real movement and colour:

But Pannett later asks Daedalus for his retrospective evaluation of ‘these your creations’: ‘Are you proud of them/….or is it all too easy?’ And even more penetrating questions are to follow, as in a pair of poems that parody a Socratic dialogue between the author and her subject, Pannett seeks to engage Daedalus, or rather his ongoing spirit, on moral issues such as those presented by the double-edged blade of nuclear technology. She imagines his response to the question ‘Tell me, was it worth it?’ (‘Question: Sweetness and the Spark’) as being evasive and self-exculpatory:

He goes on to adduce, perhaps unwittingly, the connections between resourcefulness and possible/actual ruthlessness:

The apt spareness of the verse here, ‘sharp and precise’ in itself, exemplifies Pannett’s well-honed craft, which emerges throughout the collection in her use of a range of poetic techniques, including a perhaps old-fashioned but highly effective penchant for alliteration (‘spine on the sand’ being one of many), and the multiplicity of verse forms and styles she exhibits.

The book’s deliberately antithetical structure, almost like an essay arguing both for and against a given proposition, provides perspective for poems like ‘Automata on Display, not Moving for Once’, which flags up the positive aspects of future automation, even if Pannett also insists on balancing them against less heart-warming possibilities:

Her desire for fairness and balance is suggested by the fact that we can’t immediately tell if wiping out systems and abolishing structures are per se a good or bad thing – surely it depends what kind of systems and structures? Also, her use of ‘monsters’ and ‘caves’, evoking the Minotaur as it does, takes on an ambiguity, in the very next poem, ‘Laboratory Neon’, where both Daedalus and Pannett’s readers are asked to remember that the monster he helped create was once a baby, perhaps rather less monstrous, though with its monstrousness concealed from view rather than not yet grown:

So looking back at the previous poem, perhaps if it had been freed early enough in its life, the Minotaur would not necessarily have wreaked even greater havoc than it did in its cave, but would have had a chance to develop, or perhaps we should say evolve, differently, and thus to be freed from its own potential monstrosity, as much as its prison. And how can we relate that to modern-day issues like the use of certain types of technology? These are the kinds of puzzles – absorbing yet haunting, apparently abstract but in reality directly relevant – that Pannett is so good at setting her readers.

Pannett also knows how to ensure a riveting finale, with the poems on the Icarus episode supplying a climactic tour de force. ‘Memo’ records Daedalus’ bullet-point notes on how to prepare himself and his son for their escape from the castle, concluding with an intimation of humanity and vulnerability that we have not yet seen in him:

This both is and is not verse, because the apparently random line-breaks involve skilled enjambements – the telling hesitation before ‘hesitate’, and a similar pause after ‘steady’ indicating a moment of tremulous terror (and recalling Keats’ ‘like a gleaner thou dost keep / Steady thy laden head across a brook’).

And ultimately, in ‘The Black Sail 2’, Daedalus is shown not as a godlike inventor or designer, of either artefacts or language, but as someone who could not be more human: a bereaved parent, unable to do much more than relive the horrific sequence of events, and repeat the simple words that expose the depth of his loss:

The final lines frame the book’s central tensions and paradoxes, before encapsulating a memorable portrayal of a broken man, who now lacks the articulacy to complete his sentences. They also return us to the collection’s first poem, which explored the meaning of the word ‘leaving’, and at that point implied it was positive, presumably because of its connotations of freedom, but the word has now taken on a very different shade:

A fitting end to this moving and sometimes harrowing collection, from one of the UK’s most sensitive and well-modulated poetic voices.