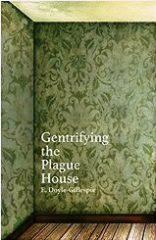 The characters in Edward Doyle-Gillespie’s captivating new collection all partake of myth and the supernatural. At the same time they are plausible and realistic. Doyle-Gillespie is a Baltimore City policeman, and the portraits of these bewitching figures are almost like the mug shots of ghosts and sirens.

There is also the woman in “Vixen in the Alley on New Year’s Eve” who “stands Ecce Homo / in platform heels.” (“Ecce homo” are the Latin words used by Pontius Pilate when he presents Jesus, bound and crowned with thorns, to the hostile crowd, just before the Crucifixion.)

The unnamed Bruja conjures the setting from an abandoned storefront, “a place for Leviticus voodoo / and Holy-Roller magic.” A marble bar materializes, “and brass rails the color of honey,” “Satchmo’s version / of Mack the Knife piped in / Deus ex Machina.” She continues her magic, the vivid magic of Doyle-Gillespie’s words, until finally

Doyle-Gillespie’s vivid characters also include the Fish Man, who “tried to swim in midair that day” (“Rapture of the Fish Man”); the mysterious woman in “Conjuring Manzanar” wearing “the short boots / and tight, black jeans of the book store girls / I knew in Brooklyn.” There are the Gossips in the poem “Gossips,” so like a trio from Greek mythology (the Fates, say, Clotho, Lahkesis and Atropos), spinning scandalous tales (“The Gossips say you got those bangles / that you wear / from another woman’s husband.”), There is “the typewriter woman” in “Much Later, She Will Edit This,” “her arms full / of an antique Underwood.” “The Farsi Man” in “Chasing Zoroaster” who “muttered to you about / the war between evil Ahriman / and his golden brother Ahura Mazda” teaches us that “creation / is the cruelest trick of all.” And “The Pele Allowance” begins evocatively:

The opening title poem, “Gentrifying the Plague House” is bookended at the end by the final poem,” “When It Was Sanctuary.” The opening poem describes “the fever,” which occupies the house, “a lugubrious Buddha,” like “something from a Salem headstone”; “in the presence of the madre, / it knows its sins and only wishes to escape.”

And in the final poem, “Time will pass, I tell her, / and they will tear this house down.” The poem – and the book – ends:

In Gentrifying the Plague House, Edward Doyle-Gillespie covers the whole gamut from creation to destruction, from Brahma to Shiva. His language is alive and his characters memorable.