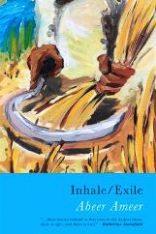 At first I mistook the title of the collection as an invitation to breathe, to do that taken-for-granted thing which means we are alive. However, on closer examination, I realised ‘exhale’ was in fact ‘exile’, a very different word, but one that makes life possible for people fleeing conflict. And we might easily guess that making sense of the past was always going to be quite some journey for a writer who was born in Sunderland, grew up in Wales and is of Iraqi heritage.

The opening poem, ‘The Storyteller’, recalls children listening to sad and beautiful stories in an Iraqi city at bedtime. We sense the loss of a four year old child felt by the woman storyteller, who smokes and clutches prayer beads as she engages the children. The poems that follow further evoke the culture and legacy inherited by Ameer, helping to place us in very particular times and places, most only vaguely familiar to us in the West. We too sit at the feet of a storyteller.

Much of what we glimpse through the poet’s lens is wholly unfamiliar to UK readers – for instance a young man saved from Saddam’s worst excesses by a teacher or students who evade the dreaded Mukhabarat intelligence service and escape Iraq. We also read of arranged marriages, harassed families and people in real fear for their lives.

In ‘Photographer in Halabja, 17th March 1988’, we find perhaps the most vivid capturing of the horror of life in a chaotic country under the rule of a dictator. The photographer “shoots everything he sees before him”, including a man “face down in the dirt/holding a baby in his arms.” This he does in order to share with the world and make us see what’s going on:

A rather wonderful narrative runs through the collection, that of the fugitive. Some poems convey the frustration, the obfuscation of officials, even the humour of trying to unite a young couple. Poor English lands them in trouble when the narrator tries to tell the authorities that her husband-to-be studies Pharmacy by saying “he do drugs”. This kind of innocence provides relief from the grim reality of many of the poems, such as in ‘White Coat’ where a newly qualified doctor is senselessly beaten until “his red-spattered/coat and trousers are wet from the waist down.”

‘Price Tag’ is a very affecting poem that reminds the reader of world politics played out as backdrop to the ordinary and extraordinary lives of families trying to survive; and ‘Bystander’ shows us how easy it is for people to get caught up “as collateral damage.” A running girl, a postman who deliberately does not deliver a summons in order to protect the intended recipients, fortune tellers who refuse to tell people what terrible fate awaits them – all these are involved whether they like it or not. The Baker, the Portrait Artist, the Scholar of Arabic, all carry their scars forever. Another element amongst all the death and destruction depicted is the mistrust. People learn not to trust one another, even “other exiles”.

Ameer writes in an impressive range of forms, including using a triad of columns in ‘Lost Heads at Firdous Square’ to depict the toppling of Saddam’s sculpture. In ‘Video Capture’ she uses four clearly numbered poems within a poem to chart Saddam’s demise. In ‘The Diver’, the poet uses three-line stanzas to tell the story of a man called into service by the government. On one assignment,

Ameer uses redaction as a technique in ‘Detail’ to hint at what can’t be said or isn’t said about the facts of a suicide bombing.

Death is everywhere in this collection, as is the intensity of a shared spirituality and trust in Islam. This fervour strikes me as both comforting and impressive when faced with such horror and cruelty. Only the fugitive man in ‘The Interpreter’, who tries so hard to adjust to life in England, finds his faith shaken. For most of the other characters, whose stories are told, “in each prayer their hearts beat, they breathe longer.”

My personal favourite amongst all these challenging, rich, sometimes enigmatic, and always profoundly moving poems is ‘The Reed Flute and I’. In this sonnet, after thirteenth century Persian poet Rumi, the reader is treated to the most beautiful evocation of what it is to know the depth of your own ancestry and the echo of past struggles and triumphs, to know “all music yearns for home.”

In this collection, Ameer suffuses her empathy and wisdom throughout each poem and gives the reader a glimpse into what it is possible to survive and overcome. There is so much for readers to connect with because the themes are universal, even if our means of coming to them might be miles away from the direct experience of war and exile. This is indeed an impressive body of work.