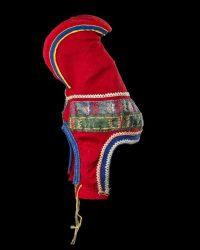 The Arctic: Culture and Climate

The British Museum
22 October 2020–21 February 2021
Nature is a monster, perhaps, only if you come to it with unreal expectations or fight its conditions rather than accepting them and learning to live with them.  Snow isn’t necessarily something you die in or hate.  You can also make houses in it.
Margaret Atwood, Survival: A Thematic Guide to Canadian Literature

Resilience and an enduring thriving culture characterise the population living in the Arctic, a large area in the North Pole comprising Greenland, Alaska, some of the northern territories of Canada, and parts of Siberia and Scandinavia.  Four million people live in the Arctic and their civilisation developed for 30,000 years in harmony with the environment.  Knowledge of the weather, an understanding of the changes that can occur in climate, and adapting and exploring new technologies have allowed Arctic peoples not only to survive but also to thrive.  Their resilience strategies rely on adaptation, collaboration and innovation and using the resources available with impressive creativity.  Unfortunately, the wonderful Arctic world is in danger because of global warming and climate change.  The permafrost, frozen ground, that covers most of the surface of the Arctic is melting quickly; the ice has receded by an estimated 75% since 1979.  The Arctic could be ice free in a few decades, which would have dangerous consequences for the rest of the world.  Roads built on permafrost would collapse and settlements would need to move to different locations.  In a possible future, land made purely of mud would replace the astounding landscape of the Arctic.

The exhibition at the British Museum celebrates the resilience of Arctic peoples as well as their impressive culture and art production.  The dates when they were made artefacts and artworks on display range from the ancient past to the present and include photographs of daily life showing how imagination is cleverly applied to practical matters as well as to the skilful use of all the resources available in the environment.  Every part of the animals that Arctic peoples hunt are used, not just the fur and meat; the bones are used to make tools, the sinews for sewing, and fish skins, sea lions’ tusks and pieces of driftwood are also made use of.  For instance, bags are made from salmon skin and snow goggles are carved from walrus ivory, and there is a waterproof whaling suit on display that is made of sealskin, testifying to the inventiveness of these peoples and how they adapt to meet their everyday needs.

Arctic peoples improved their living conditions because of the combination of understanding the environment and having empathy with it and respecting the ecosystem.  It is the continuous balance between human survival and caring for the environment that allows them to adapt, survive and thrive.  It is an efficient society that does not waste what it collects but reuses and even honours the resources.  According to the beliefs of Arctic peoples, objects are borrowed from nature and should be  shared in the community in the forms of gifts and eating communally.  The entire carcass of the animals is used too, and is treated in a way that is deemed proper.  Arctic peoples believe that if the souls of animals that they have killed are treated in a respectful way, they will be reborn in an eternal cycle of life that grants repetition and renewal.  Therefore, they see the land, the water, animals and ice not as separated worlds but as close to humans in an almost mystical yet practical way.  In this perspective, it is the animals that choose the hunter according to their skills and weapons in a dialogue that is profound and inclusive.

The products that are manufactured have both a symbolic and a practical meaning.  For example, garments might resemble animals because that is thought to help the hunter to be successful but also because it is believed that this transfers the animals’ characteristics to the hunter.  The inuksuk, a place marker constructed with piled-up stones, is a symbol of cultural knowledge that maps a specific place, for example to identify where the caribous usually pass through or to indicate a route.  It usually has a window or a stone that protrudes and points the way.  This is a different way of understanding to the Western mentality and is not only based on observation but goes beyond it, acknowledging vital links with the environment without challenging it or trying to oppose or overcome it.  In this way, Arctic peoples not only use and reuse the materials available but they also explore their potential.  The clothes made from sealskin and furs reveal the seamstress’s skill, for example in the subtle stitching that makes clothes waterproof or in the way they structure boots with reindeer fur soles with the ends pointing forward to produce friction on ice, or use wolf fur to trim hoods because this kind of fur does not absorb moisture and therefore protects the face from freezing.  They use autumn caribou fur because it is thicker and used to rub charcoal on the inside of visors to reduce the glare from the snow.

This example of cultural adaptation, technical innovation and cooperation in Arctic communities is a model that responds to global climate change issues in an alternative and creative way.  The Arctic peoples’ experience is based on the weather and the cycle of the seasons; it is a practical experience that is lived day by day, not an abstract idea.  For instance, humidity affects the process of cleaning and drying animal skins and the wind influences hunting and herding.  The relationship with the weather is reciprocal and is based on experience as well as on a wider spiritual view.  The peoples of the Arctic respect the power of the weather and avoid risky situations, staying inside and protecting themselves from dire climate conditions if necessary.

Art is part of their everyday life.  In difficult economic times, artworks provided income in the forms of furs and souvenirs, such as stone, wood and ivory carvings, prints, grass weaving and embroidered clothing.  These products were sold in markets and exported to southern areas.  Canadian Inuit art became successful and has attained global recognition.  Professional artists such as Kalulu Sagiatak, Kenojuak Ashevak and Lukassie Tukalak sell their work to collectors and exhibit in art galleries around the world.  The subjects are realistic according to the Indigenous storytelling tradition and blend modern and conventional topics.  Art establishes a conversation between the past and the future and between Arctic culture and that of the wider world; it is a powerful tool that conveys the Indigenous view better than abstract concepts or scientific facts.  Art is also a way to recover stories, rituals and traditions which were marginalised and lost in part because of the contact with southerners and Europeans that started in the 16th century and continues today.  In some cases, this contact started collaborations and trade exchanges, but in others it resulted in confrontation and conflict to the point of kidnapping and genocide; the Alutiit communities in Siberia, for example, were the victims of these crimes in the late 18th century.

The relationship with European colonisers and with postcolonial issues was often ambiguous.  Arctic peoples benefited and suffered at the same time, and this is still true today.  Modern welfare democracies have made their life easier in a way, due to facilities such as electricity and central heating, but some of the fundamental values of their culture have lost their meaning.  As a result of this influence, their survival strategies have been weakened and therefore the challenge of coping with the consequences of climate change might seem even more threatening.  Nevertheless, their culture of resilience, innovation and adaptation remains a global model for all people and for future generations. 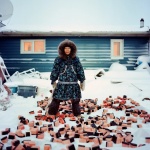