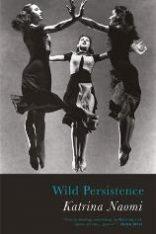 There are two wryly humorous poems that alone should make you want to buy and devour this third collection from Cornish-based Katrina Naomi. ‘Boasting Sonnet’ is a neat trick in writing memoir – a topic with which much of this book is concerned – with the trickery leaving the reader to guess which of the boasts is true and which is, well, a trick. Did Sharon Olds write a poem for her? Has she done panto in Cornish? My only disappointment, like Naomi’s is that she cannot go on: ‘sonnets make you stop’.

‘Taking off Billy Collins’ clothes’ is her feminist response to his poem ‘Taking off Emily Dickinson’s clothes’. Of course, she does not reveal all, but I loved the detail of the ‘lemon cashmere sweater’. Emily Dickinson appears again in ‘On Suitors’. Emily famously listened to them from behind a door; Naomi similarly wants to ‘fall in love with a voice/ and then – only then – decide on a face’.

Dark notes amongst these light-touch themes are the poems which deal with women’s experiences of violence such as ‘It was nothing to do with any of you’ where Naomi rails against questions of what she was wearing and her step-father’s reaction, and finally being ignored: ‘You might just have asked how I was’. ‘If I were a different Person I Might be able to Forgive’ explores similar territory in uncompromising terms. These are tough and rewarding poems of survival.

‘How to Celebrate a Birthday’ is surely the model against which all future birthdays must be measured. It is packed full of activity: swimming, drinking, sex, and dancing –

That is surely the kind of birthday I would like. A number of other poems explore her relationship with her partner, they are both tender and funny, especially on the almost workaday business of fucking (‘On Fucking’).

Leaving London for Cornwall occasions a regret/no regrets poem, ‘London: A Reply’, where the city is like a lover being let go. Similarly when taking the train from London back to Cornwall in ‘Not Really About Snow’ Naomi sees London ‘still wrapped around’ the wheels of her suitcase ‘…like memory before it washes out’.

There are many poems in celebration of Cornwall and her life there, and there is even a Cornish version of one of her poems (‘Poem in Which She Wears Her Favourite Wedding Dress’), which I found fascinating – it sort of looks like Welsh, but isn’t, but then, since I have no more than a few words of Welsh, how would I know?

If you haven’t been on holiday for a while, (who has?) this collection might just be the vacation you are looking for. Moor and sea, the rough and the smooth of family and a peopled town in all its seasons, it’s all here in Naomi’s crisp and frank style. Dive in. Enjoy.