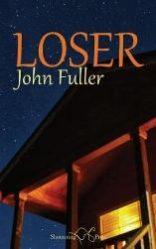 Loser is an engaging novella by prize winning poet and author John Fuller. It centres upon a middle-aged widower, Graham Horrocks, and the respectably middle-class suburb in which he lives. Graham is a discontented man, still trying to re-order his life after the death of his wife (who was a professional musician and seemingly a much freer spirit than her husband). He is also troubled by his rather distanced relationship to his grown-up children and by fairly trifling disagreements with his neighbours. But his two main frustrations are the administrative difficulties of closing an old savings account in order to buy shares in a business start-up venture and – in a quite different vein –the anti-social and possibly criminal activities of young people who frequent the riverside path that runs past the bottom of his garden.

The story is set in a present day Britain where the Brexit referendum has taken place but the Covid crisis has not yet occurred. The opening situation is relatively ordinary (even sit-com territory) although very well told; but events veer very much out of the ordinary around the middle of the book when an unfortunate mixture of circumstances puts Graham in a very uncomfortable position. No plot spoilers here; but the exploration and resolution of his dilemma produce a genuine sense of mingled tension and pathos in the book’s second half. We become caught up in Graham’s complex problem; and Fuller convincingly describes the mental anguish involved when Graham (like many of us) struggles to postpone a course of action even though he knows it is the only way of (possibly) escaping from his difficulties. The thing that has to be done is “like a precarious scaffolding holding up a ruin. He could do nothing about it without the likelihood of total collapse, and yet nothing else could credibly be done while it was still there.”

The story is told by an omniscient narrator mostly from the viewpoint of what Graham can see and what he thinks. But in one section we are given an account of things that happen to Arlene who is one of the drifters who annoy Graham by hanging around on the path by his garden. There is an interesting shift in the tone of the writing when it passes from describing Graham’s fussy and irritable thoughts to Arlene’s rather more dreamy and pragmatic reflections. Such enjoyable dexterity in writing is not surprising when the writer is a poet; and in fact the book is full of enjoyable stylistic touches. When a punt goes by on the river its pole is “like a small exclamation mark between the willows”; when Graham ends a conversation with a female neighbour he gives her “a little touch of her shoulder that didn’t mean anything but perhaps wasn’t (he felt) intended to mean nothing.” At one point in the story Graham comes across some scribbled writings and decides “these were meant to be poems. He knew enough about modern poetry to realise that if you didn’t capitalise the personal pronoun and didn’t use any punctuation you had a peculiar and exaggerated idea of your own significance…” Was Fuller’s tongue in his cheek as he wrote those words?

Quite a lot of the action takes place in and around the “pod” which is a sound-proofed shed at the bottom of Graham’s garden where his late wife used to practise on her cello. His somewhat ambivalent relationship to the pod is well captured in a comment made by Graham’s son while his mother was still alive, comparing her cello to Schrodinger’s Cat. “You don’t know if she’s playing or not, and when you open the door you still won’t know, because she will have stopped, he said. Or was not playing anyway, if you see what I mean.” Some of Graham’s anxieties are connected with his need to find and remove items from the pod and the Schrodinger’s Cat metaphor becomes increasingly relevant and increasingly sinister as the story proceeds.

Although this is quite a short book, it has a substantial cast of well-sketched characters including – unusually, it seems to me, for a 21st century novel – a parish priest. Father Eustace is no saint; but neither is he a caricature or figure of fun. One scene actually takes place in church and allows us to hear part of the vicar’s sermon. An awkward misunderstanding of the sermon’s theme by Graham’s son Michael is just one detail in a rather uncomfortable weekend visit by Michael and his girl-friend. Other settings include a neighbour’s barbecue, the local golf club and a GP’s surgery. The last-mentioned location supplies Graham with a blood-pressure monitor which provides him – and the reader – with a running assessment of his anxiety-levels in the face of life’s difficulties. All these social and business encounters ring true and some of them could have been developed further if Fuller had made this a longer novel.

The one aspect of the book which felt a little unsatisfactory to me concerns the rather enigmatic diary that Graham discovers among his late wife’s possession. This is clearly serves as one more unsettling ingredient that helps push Graham towards his eventual crises; but I did hope that more of the wife’s back-story might emerge as a sub-plot. Apart from this, however, (and to focus on the book that was written rather than one which was not!) Loser receives my warm recommendation.