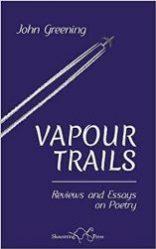 VAPOUR TRAILS: Roger Caldwell “reviews the reviewer” and discusses a collection of  John Greening‘s writings on poets and poetry

In his introduction to this welcome new book from Shoestring Press John Greening takes issue with the quality of contemporary poetry reviewing, in particular the “tendency to discourage negative comment” – as if it were the task of a reviewer to be a cheerleader rather than to exercise critical sense. The qualities required of a poetry reviewer include a wide knowledge of the poetic canon (not just contemporary poetry, and preferably not just poetry in English), an understanding of poetic technique, catholic sympathies, an openness to what is genuinely new, and a willingness to say when (and why) a poet falls short. Greening has these qualities in spades. Of course, as a practising poet, he might be expected to have an inside knowledge of how a poem is made, but although the poet-critic is a familiar figure, not all good poets make good critics. Often there is a sense of axes being ground: poets need to defend their home turf and can be blind to the merits of poetry that works in a different manner to their own. (One thinks, for example, of Robert Graves.) And, of course, there are fine critics who are non-poets: here Greening cites the admirable Helen Vendler.

Greening is even-handed in his approach: here there are no hatchet-jobs. The figures addressed comprise a wide swathe of modern and contemporary poets in English (with a solitary interloper from Iceland): some of these like Anne Stevenson are only recently dead, others like Simon Armitage still very much alive. Greening’s writing is graced by sudden metaphorical flights that come as flashes of illumination, as when he draws an analogy between writing poetry and fishing: “You need to be alert for that moment when the float twitches”. Achieving a successful poem he compares to “a surfer catching a wave”. Of Amy Clampitt’s habit of writing poems in one long continuous sentence Greening observes that this one sentence can keep a poet effortlessly airborne “like a glider on a thermal” – but, when less successful, it can sound “like a politician engaged in a filibuster”. He sees the “clipped, conversational manner” of Patricia Beer as “courteous, but not allowing the reader past the doorstep”. Of the currently unfashionable Norman Nicholson he wonders if the Zeitgeist hasn’t “left him stranded rather like the jellyfish of his beloved Duddon estuary”. Of Anne Sexton he finds poems that no longer ring true: “she reaches for a simile rather than giving birth to a metaphor”.

Frequently he draws on his knowledge of classical music for analogies. Moniza Alvi’s poems he sees as “poignantly exposed, like an unaccompanied flute sonata”. Anne Sexton’s contemporary takes on Grimm he compares with Percy Grainger “beefing up a folk-tune” Responding to the charge that Michael Longley repeats himself, he sees it as true, but only in the sense that Haydn does, and Haydn’s richness of invention is such that “we throw our hats up in the air for it”. More particularly, responding to a poem of Anne Stevenson, ‘Arioso Dolente’, (itself, of course, a musical poem, taking its inspiration from a Beethoven piano sonata), Greening finds that in the course of it we seem to have moved on from Beethoven’s Romanticism “into the twentieth-century world of Nielsen’s Fifth Symphony, the desperate snare-drum unable to halt the march of events.” Musically his one concession here to popular culture is a fleeting reference to Bob Dylan in whom he finds (contrary to Christopher Ricks) that performance takes precedence over the words. Relatedly, in the case of John Agard, he wonders how far a poet’s presentation should affect one’s own reading of the poem.

He is a forceful and often persuasive advocate of neglected poets, (though I for one am in no hurry to look up Andrew Young). He is fair to the poetry of Edmund Blunden: though he might seem at first a “complacent pastoralist” who “wrote of shepherds as others might mention bus conductors” his prose ‘Undertones of War’ (which Greening has edited) with its account of war’s terrors and its consequent surrealist images carries over, in a slightly hidden form but nonetheless unmistakeably, into his poetry which initially may seem too innocent. Greening is (rightly) much focused on how a poem sounds. He likes plain speaking, but this needs to be lubricated with language’s “hum and chug and trill”: here he sounds, uncharacteristically, a little like Seamus Heaney who had a weakness for such linguistic triplets. I am a little uneasy with his observation that “the only issue in a poem should be the language” – no doubt it should be the foremost issue, but I am not persuaded that it is the only one, and in epic or political or satirical poetry it clearly cannot be.

His writing is very much a balancing act, saying “Yes, but” or “No, and yet”. He expresses admiration for Edwin Muir though acknowledging that the reader must put up with a good deal of abstraction and an over-dependence on archetypes. He is sympathetic to Kathleen Raine who goes much further in this direction, but one wonders to what degree appreciation of her poetry depends on credence in her Hermeticism as a philosophia perennis. When he conjectures that Ted Hughes will be celebrated as “complete man of letters, poet, sage, and force of nature” it is the “sage” that is most questionable. Do we have need of sages in the first place? And in particular those who reject science in the name of magic and occultism? One remembers Anne Stevenson’s forthright dismissal of the Black Goddess – indeed, goddesses of any hue.

Elizabeth Bishop, of course, is now rightly in no need of champions. Greening finds something Wordsworthian in her work which is such that it “attends to the outer world in order to appease the inner”. Bishop is in search of home rather than trying to escape from it. Except in the sense that we are all in a state of exile, Greening himself is a largely non-exilic writer. The vapour trails of his title refer to those of planes seen from his bedroom as a boy when he observed planes descending to land at Heathrow. In an essay on Huntingdonshire he traces the various poetic trails which haunt the slightly hidden county which is now his home territory.

Poets may feel the need for an audience, but they should not adjust their sights in order to pander to one. Sometimes this is a temptation that proves too strong. He speaks of Simon Armitage’s “need to appease an audience”. In the case of Gillian Clarke he suspects that she is “too aware of an audience” for which she feels the need to dish up something “contemporary” and “relevant”. The demand for poetry to be relevant is too often associated with what is, in effect, dumbing down and selling poetry short – so much so that one is tempted to look to poetry that is seemingly irrelevant for something that doesn’t insult the reader’s intelligence. Poetry that aims at a direct response to contemporary events rarely succeeds in hitting home: a certain obliqueness is usually required. A major exception to this is Louis MacNeice’s ‘Autumn Journal’ which remains un unforgettable picture of a world on the eve of war, but Simon Armitage’s millennial poem, already (deservedly) forgotten, shows that it is a hard act to follow. Greening finds in general that there is for a poet a danger in “knowing too clearly what you want to write about”.

For the most part he avoids the obvious: if, in general, we have heard all too much about the relationship between Ted Hughes and Sylvia Plath he here discusses the less-celebrated poetic marriage between Peter Redgrove and Penelope Shuttle. The range of poets discussed, as in the nature of occasional writings, is broad but not comprehensive. One would have liked to have known what he makes of J.H. Prynne or Geoffrey Hill, though there is a glancing reference to the latter when he discusses poems suitable for Remembrance Day – he wonders if ‘The Mystery of the Charity of Charles Péguy’ is “orotund” enough and has “the non-specific gravitas” for the occasion. But not all here is, or should be, high seriousness. He makes a plea for light verse, which after all requires a command of technique. He cites John Fuller’s ‘The Spellchecker’s Guide to Poetry’ where spellchecked poets appear as Philip Lark, Seams Heady, and Silver Plash. Greening eschews grand theory about poetry, and is in many ways oriented to the practical – as when he discusses the use of rhyme. Here even a major poet like Hardy is not exempt from the criticism that the progress of a poem can be too much led by the fortuity of the rhyme-words, so that in effect “the horses are steering the plough”.

There are many such insights here. If poetry widens our sympathies and heightens our attentiveness, so can writing about poetry, particularly if it is as probing and acute as that of John Greening. This collection is a treasure-trove for anyone interested in modern poetry, and above all serves as a reminder for those who might be inclined to doubt that poetry matters.