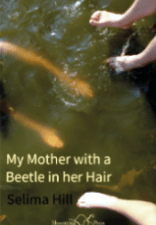 Poetry review – MY MOTHER WITH A BEETLE IN HER HAIR: Edmund Prestwich finds that this Selima Hill collection blends a satisfying unity with surprising diversity

I first came across Selima Hill in 1985 with Saying Hello at the Station. One poem that leapt out at me then was the enchanting ‘The Fowlers of the Marshes’. It starts with eight casual-seeming, hauntingly evocative lines describing Ancient Egyptian fowlers in the marshes of the Nile, followed by five comparing Hill’s mother’s ‘hushed peculiar world’ to that three thousand year old one in its sheer strangeness to the poet. It concludes

In some ways this is unlike the poems of My Mother with a Beetle in her Hair, in others it’s cut from the same cloth to a quite remarkable extent. It’s unlike them in the surprising nature of the final twist. The ancient Egyptian world and the one of meeting Mum at the station each seem to exist fully in their own right before the last line and a half bring them together in a startling, two-way exchange of associations: Thoth was the Egyptian scribe god and the Weighing of the Heart represented divine judgement of the dead. The poems in the current booklet don’t have the same dancing lightness, the same almost childlike agility and exuberance of imagination. This involves the loss of one kind of pleasure but it’s balanced by a gain in groundedness and weight, a rueful acceptance that the pressure of the world and of other people’s expectations is an inescapable force against which the yearning for freedom must always struggle. The most persistent and powerful expression of this pressure is still the poet’s mother, explicitly mentioned in over a third of the poems. The other most persistent imaginative presence is the water the poet finds freedom in, whether in a lake or regular visits to swimming baths.

Hill’s gift for combining artifice with seemingly casual spontaneity, can be seen in ‘Owls’, where she throws the reader off balance by veering between different metrical patterns but – and this is crucial – each time catching and holding him securely within a new one. Different patterns frame different tones and states of feeling. Skilfully composed transitional lines hold the poem together through its changes:

The first three lines have a mechanically heavy iambic pentameter beat that suggests the poet’s sarcastic parodying of her mother’s voice. The ‘first’ / ‘most’ half-rhyme rounds this unit off. Line four is still technically an iambic pentameter but the second and fourth stresses are so faint that it almost becomes a line of three feet, smoothing the shift to iambic trimeter in line five. It can equally easily be read with the heavy beat of lines 1 – 3 or in hushed anticipation of lines 5 – 8. In them the whole feeling is arrestingly different to that of lines 1 – 3. Metrically isolated from the lines before and after it, each of lines 5 – 8 quivers with the child’s tension and excitement, torn between the fear of being caught and the thrilling strangeness of the night world round her. Line nine makes another transition: even as Hill evokes the hooting owls she slackens this metrical tension, preparing for the throwaway wryness of the last line.

Weird imaginative conjunctions or disjunctions often give these poems a surreal tinge, as when Hill describes a group of mothers in the shallow end of the swimming pool

or remembers how a bathing cap she wore as a child

This intermittent eruption of surreal associations has its own delight and has surely always been one of the reasons for Hill’s popularity. However, these poems would lose much of their power if they weren’t so essentially grounded in our shared ordinary reality. It’s the conflict between the the freedom-seeking imagination and its entanglement in mundane pressures that makes the dream of escape so poignant. Hill enters into other people’s need to escape as well as presenting her own. ‘The Pool Attendant at Night’, for example, plays with the Daoist philosopher’s famous story of how he dreamed he was a butterfly, then woke not sure whether he was really a man who’d dreamed of being a butterfly or a butterfly now dreaming of being a man: Hill imagines that when the swimmers have all gone the pool attendant locks the baths, takes off all his clothes and slips into the water ‘like a newt / that thinks it’s not a newt but a pool attendant’. Behind the joke there’s the recognition that the swimmers’ place of escape is the pool attendant’s place of work. In many of the poems this kind of alertly mobile empathy glints through satirical humour. This includes Hill’s recognition that her mother was as much trapped by the awkwardness of their relationship as she herself was, accepting that she was ‘a difficult child, / violent, morose and inconsolable.’

Playfulness and seriousness mingle in most of these poems but not the last two. That in itself gives an expressive arc to the whole collection. In ‘Expensive Swimwear’ Hill thinks of a friend who is seriously ill. Swimming all afternoon, Hill swims ‘to nowhere, / to somewhere where she’s not too young to die’. And ‘No More Potatoes’ imagines someone (the same friend?) pleading with nurses not to keep feeding her nothing but potatoes. It’s a beautifully subtle little poem. The patient’s voice slips into the poet’s compassionate meditation on what the patient’s life now is and what her death will mean:

Losing the repulsive things that now sustain her life she’ll lose everything else, all the beauty she could or ever did enjoy. Within the poem itself that last line seems to come out of nowhere, a final shock of loveliness, of gratitude for life and sorrow at the inevitability of its ending. At the same time, echoing the lake of ‘Owls’ – the first poem in the booklet – it gives a sense of rounding off and completion and so, I think, implies acceptance of death, in contrast to the way the previous poem tried to fight off the idea of its unfairness.

I referred to the arc of the whole collection. I think one of the reasons it works so well and is so satisfying is that it is both tightly unified and very diverse, full of imaginative and emotional side-steps around recurring situations and reflections. Powerful as the best of the poems are on their own, I think they very much gain by being taken in sequence, so that, for example, the yellow copulating crocodiles that might have been funny in an earlier poem fall expressively flat in the last one.