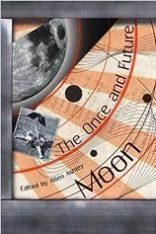 The Once and Future Moon

THE ONCE AND FUTURE MOON : Louise Warren investigates an anthology of speculative fiction compiled and edited by Allen Ashley

From cosmic deity and universal symbol of cyclic time to that grainy footage of an astronaut stepping out of his capsule for the first time, the moon has always been fertile ground for myth making and storytelling.

The Once and Future Moon, edited by Allen Ashley, is an anthology of 18 brand new science fiction and fantasy stories from Eibonvale Press, a small publisher specialising in horror, magic realism and the surreal. They take pride in producing beautifully designed editions, curated with real care and attention to detail and this current book is no exception: Victorian steampunk yarns rubs shoulders with moon goddess fantasies, science fiction futures and slipstream realities. There is something here for everyone – although I have to say that not every story works for me: some of the dialogue is clunky, and the shamanic fables are too whimsical for my taste. However, the best stories create a strange uncanny atmosphere that perfectly conveys the silvery coldness and mystery of the moon.

Aliya Whitley’s “Bars of Light” is set in a 16th Century rural village and draws on folklore and superstition to create a genuinely haunting tale. A young widow is convinced her dead husband has been transported to the moon and imprisoned by bars of light.

I said: How did Michael get to the moon?
And you said: The power of the Almighty placed him there as a warning to us. He will not be coming back Biddy.

One night Biddy goes out into the fields and believes her husband has escaped in order to impregnate her.

He was in my dream and he said: Come.
The moon touched everything. It was full and alive, and Michael was clear in it. I could see the curve of his nose to his eye, and the shadow underneath that has always spoken a little of sorrow to me. His voice was so clear. I come.

What follows is the unravelling of a woman’s desperate need to escape the confines of her church and community and find freedom and love in the moonlight.

Another man in the moon appears in Douglas Thompson’s “Dissolver”. Set in contemporary Glasgow, a woman meets a mysterious stranger, and they become lovers.

Where did you say you were from? I asked again.
The moon, he said, the other side of the moon, where my people can hide from all your telescopes and radio waves.
Your people? I laughed, incredulous.

He finds it difficult to cry, his skin has no scent and he avoids the rain. He may or may not work for the European Institute for Astronomical Research, an organisation that may or may not exist. What follows is a sequence of odd events and encounters.

What does the moon mean to us?
What is the difference at the end of the day between one human life and another? Between terrestrial life and even alien?

This is a clever seductive tale that kept me guessing all the way through.

Madness is also associated with the moon: the word lunatic derived from its Latin name Luna and lunacy is at the heart of Simon Clark’s “A Faience of the Heart”. Mrs Jenner, an inmate at Milton-Wyke Asylum, is convinced her dead husband is behind a plain wooden door.

She twisted the doorknob with a wild desperation, yet the door did not yield.
I must see him now! He is ill.

Cut to the same building, now a laboratory in 1958 and Jimmy, a teenage intruder sees the doorknob turn. This is a time travelling fantasy that moves from 1863 to 1958 and beyond.  What is the ‘Baberscope? ‘

Jimmy sensed the machine devouring pure moonlight, sucking that pale radiance into itself..

This is a marvellous story, really well paced and dramatic, and I loved the image of the door, a portal to another world, another time.

Lunacy and portals turn up again in Alexander Greer’s strange and terrifying “Lunar Gate”. This time collective madness has engulfed the world, following a huge chasm appearing on the moon, known as the Lunar Gate. Two scientists are sent up to investigate. As they make their way inside, things become increasingly odd and scary.

John led the way down the rope, bouncing along the slick smooth faces of millions of stars glistening from canyon walls like cool deep water that seemed to shift with the breath of a breeze felt but unseen. All the men were gradually more befuddled, their minds finding thoughts racing away which they could never catch.

I won’t tell you what happens as they descend further, but this is a wonderfully slippery silvery horror tale, the stuff of nightmares.

Closer to home, yet just as frightening is “The Empties” by Gary Budgen. Set in an old council block in South London, at a time when something peculiar is happening with the moon. It is getting closer, and worse, people are disappearing.

More and more messages came: print, radio, TV.
Come to the Moon. All those with souls are welcome.

Up on the rooftop Mr Margoles is looking through his telescope.

I think they are beginning to build on the surface. This was new. We had watched over the weeks as the greenery had spread. Now structures are beginning to appear…do you see the place that is waiting? The minarets and ceremonial arches, towers and spires. The great city nestled within the foliage of the wonderful garden. We will walk in those groves and arcades, bathed in earthlight.

Of course, no anthology about the moon is complete with a story about little green men or their equivalent. “To Sharpen, Spin” by Charles Wilkinson is a deeply disturbing and brilliant tale, Set in a city somewhere, but of another time, it is about a young boy waiting for his drunken father to come home. His mother sends him to the barrier to find out what time they are shutting the gates. Wilkinson is also a poet, and it is no surprise that his writing is beautiful and magical.

Outside, the street is empty. A few of the shops are shuttered, but most have front windows that are still lit up, illuminating displays of shoes hand-crafted from genuine leather, their shine slippery, silk ties and handkerchiefs: the glimmering barrels of shoguns, manikins attired in hunting tweeds.

His father is in a shop called ‘The Case of Knives.’ Everything is off kilter and glittering with menace. Again, the moon appears strange, larger than usual, its surface is bright, as if electroplated with silver. The boy hears whispering voices from his mother’s room, even though she is in there alone. Later he notices that the wall on the landing seems less solid than usual, and he glimpses something flitting, white and tenuous, more like something forming. There is a wonderful and horrifyingly filmic quality to this story. Its ending haunted me for days.

This is a thoroughly inventive and engaging anthology that follows in the tradition of writers like H.G. Wells , Ursula K.Le Guin and Arthur C. Clarke. It captures the moon in all its inconstancy, its enchantments and mysteries, dealing with both its light and its dark side and the fascination it has always held for scientists. Recommended.