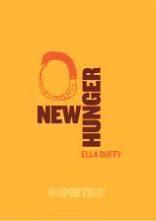 Carefully crafted like precious jewels, these debut pamphlet poems are a delight. Ella Duffy opens with a number of love poems and one that is especially unctuous is ‘Plum Picking’ where one lover steals a plum stone from the other’s mouth ‘to rest on my tongue/ like a promise, a vow’.

There are many poems using classical mythology in interesting ways, such as ‘Tree’, in which the Daphne myth is occasioned, not by fleeing, but being kept waiting. Duffy’s vivid and visceral language speaks of ‘skin itched into bark’ and ‘a rash bubbled with moss’. ‘Medusa’ runs a bath ‘so hot it flays the scales/ from her skin’ in her lonely existence. Duffy invents her own myths too as in ‘Moss Children’. ‘Saints’ is a four poem series of holy women – Lucy, Appollonia, Noyale and Euphemia – all uncompromising in their sacrifice and its clear expression.

The precarious state of the natural world is explored in poems like ‘Blackbird’ in which a fledgling does not survive, and ‘Tuna’, which features the ‘last of its shoal’.

Duffy deploys a range of inventive imagery which gives her work a richness to be enjoyed slowly. In ‘The Old Drunkard’, for example, the title character has ‘eyes shrunk as garlic cloves’ and in ‘Injury’ a shaved head has ‘the caesarean purple of turnip.’

The twenty six poem pamphlet ends with what I imagine is an autobiographical poem, unpromisingly called ‘Shard’, but this is no cliché of broken glass. Rather it is a scene of communication between a daughter, fifty floors up in the building of that name, locating her mother on Southwark bridge below and signalling to her by flashing the bathroom light off and on ‘the space between us swollen/ and homesick, a mile long.’ This is an image that is both touching and rewarding – as is the whole book. Brava!