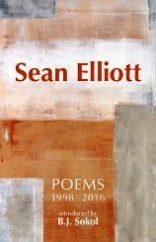 Sean Elliott died in 2016 at the early age of fifty-one. Apart from a study of Restoration Drama in the invaluable Greenwich Exchange Student Guide series, he left behind a fugitive pamphlet of poems put out by Acumen and a collection, The Status of the Cat, published by Playdead Press (who?) which is more or less invisible to the naked eye. There were, however, a sizeable number of uncollected poems, many of them appearing in reputable journals – Acumen, London Magazine, Magma, The Poetry Review, The Rialto – that have now been brought together with an Introduction by B.J. Sokol, and published by Greenwich Exchange. The Poems are, so it appears, grouped thematically rather than chronologically, making it difficult to know whether Elliot developed over the course of what was a sadly truncated career, or whether, as seems more likely, he soon settled on his preferred style and method: one of transpicuous formality. He was a skilful artificer, able to handle a number of subjects and forms to suit: sonnet, rhyming quatrains, terza rima, etc; and the aplomb of his manner makes him an agreeable companion whatever his subject.

Judging from what is said in the regrettably uninformative Introduction, Elliott was a man interested in most things to do with poetry, while never preoccupied with the question of his own status as a poet. He earned his living as a teacher of literature and he seems to have run poetry classes, but I’m not aware that he mingled much with other poets. ‘Nature he loved, and next to Nature, Art.’ Landor’s self-epitaph might, you feel, be applied to Elliott. In Section 6 of ‘Good Advice’ – a long poem about frustrated love, and worth quoting in full – he reports on the supposedly therapeutic effect of working with his hands:

This is Movement poetry après la lettre: ruefully witty, engagingly modest, the kind of verse D.J. Enright would not disown, and I don’t mean this as slender praise.

There is an even better example of this kind of work in ‘Wine to Water’, an accomplished, five verse handling of terza rima, which begins with a report on a neighbourly quarrel:

Elliott keeps the metaphor of increasingly bad weather standing for a deepening argument going pretty well in order to arrive at the final stanza in which the breaking storm affects all the apartments of this run-down block, prompting the reflection that ‘neighbours make no fuss,/next time the shouting starts it might be us.’ Yes, you could and probably should nit-pick. Is trickle the right word? Why make a fuss about a storm? And anyway though wine can have a full taste, how can it be ‘close’. Press hard, in fact, and the poem breaks up.

Better is a poem such as ‘Dead Stock,’ another exercise in terza rima, a wry, dry acknowledgement of how many books remain unread or quickly become so. Such extravagant authorial dreams, such gone to dust realities. Elliott is, as so many are, an occasional poet, and an enjoyable one. Different scenes strike his eye and call up poems, But he’s at his best, I think, when he’s less free to choose his subject, more pressured by events. This applies particularly to the poems connected to his treatment for cancer. I especially admire the cool objectivity of ‘NINE WAYS OF LOOKING AT A CHEMOTHERAPY WARD’, which carries an epigraph from Emerson, ‘I am glad to the brink of fear.’ Here are three of the ways:

The bare, laconic mode of this and other late poems, their observational control, testifies to a moral steadiness that is wholly admirable, and I wish only that they had been dated. In fact, I could have done with a good deal more by way of editorial intervention in this otherwise much to be welcomed collection. Elliott may not be a poet of the first rank but he’s good enough to deserve saving from oblivion.