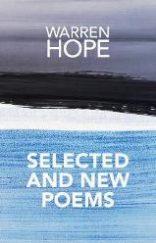 Warren Hope’s life in poetry has been long and productive. He has a biography of Norman Cameron to his name, together with books on, among others, Robert Frost, Seamus Heaney, Philip Larkin, and Shakespeare. However, his own poetry was confined largely to small press journals before Greenwich Exchange published a selection of his early verse, Adam’s Thoughts in Winter in 2001, followed in 2013 by First Light and Other Poems. Now he is in his late seventies, this new collection, Selected and New Poems, offers a welcome sample of his intriguing work.

Born in Philadelphia, Hope has a Ph.D. in English from Temple University, and his poems reflect an American life viewed largely through a literary lens: certainly there’s a weight of reading behind them, and allusions abound, from the Bible to Beowulf, Camus to John Le Carré. Occasionally this gives his writing a self-aware feel, which at its best develops into an entertaining metafictional playfulness. In ‘The Arrest’, for instance, he creates a world in which Maigret arrests Georges Simenon, while ‘The Plot’ also takes a bold leap into Pirandello territory – I cite it here in full:

The humour is typical, as is the willingness to relinquish reason. As Michael Donaghy once wrote, poetry, like comedy, often ‘gets its sense beyond reason’, and that’s the case here, where the speaker vanishes the second he acknowledges his unwritten characters’ right to exist! As his demanding characters are all stereotypes, we might say it signals the importance of keeping clichés in check: as soon as the author allows them into his plot, he is finished.

The phrase ‘beyond reason’ applies to many of Hope’s poems, and it features literally in ‘The Condition’, which addresses poetry’s favourite subject, love. Once more I quote it in full:

Again Hope eschews reason to explore an emotion that exceeds it: his ‘fifth season’ is one that transcends time; as it’s not of ‘time or place’ we assume it’s the season that contains all seasons – winter, spring, summer, autumn – balancing beginnings and endings in perpetuity. While Hope’s language is perhaps a little clunky, the central idea is typically inventive and arresting.

Hope’s playful self-awareness, delight in the absurd, and penchant for minimalism puts me in mind of the American flash fiction writer, Lydia Davis. Where her microstories often resemble poems, so Hope’s poems often look like microstories. Consider, ‘Waking’, another minimalist gem:

Both in terms of theme and style this could be a Davis microstory, interrogating planes of reality by forcing us to untangle and reflect on them. The dream and the recollection of the dream are set alongside the shadow and the reality that created it: one becomes a figurative parallel for the other. I mentioned the breadth of Hope’s reading above, and that clearly includes Freud: we can discern his influence here, as the bee introduces an element of threat that places us in the realm of the uncanny. We can’t quite decide if this oddly familiar experience is positive or negative. ‘Express’ also has a Freudian feel, once more dwelling on the relationship between the conscious and the unconscious; again I quote it in full:

What might that ‘something else’ be? It’s a question we must ask ourselves given that the second person pronoun situates us in the poem. The word ‘permitted’ could suggest that waking is a positive thing, but the idea of the mind following a train through the night implies a dissatisfaction with the here and now. Perhaps this is the ‘something else’ that disturbs our sleep, keeping us awake in uncertainty: not everything can be ‘permitted’, certainly not the repressed secrets that Freud placed at the heart of the uncanny, and which underpin this piece.

Hope’s work isn’t the place to find rich and textured language: his expression is mostly inornate, often pedestrian, with little distinctive imagery, but it’s distinguished by a comedian’s readiness to disregard the rational that is frequently striking, and memorable. While his talent is perhaps more philosophical than poetic, he has fun with ideas, which it’s often a joy to share.

Paul McDonald taught at the University of Wolverhampton for twenty five years, where he ran the Creative Writing Programme. He took early retirement in 2019 to write full time. He is the author of twenty books, which cover fiction, poetry, and scholarship. His most recent book is Allen Ginsberg: Cosmopolitan Comic (2020)