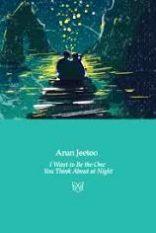 Poetry review – I WANT TO BE THE ONE YOU THINK ABOUT AT NIGHT: Mat Riches finds some authentic and painful life experiences in Arun Jeetoo‘s poetry

After finishing Arun Jeetoo’s pamphlet. I Want to Be the One You Think About at Night, my first thought was, “Phew, I don’t want to go through that again”. However, let’s be clear here, by this I mean the pains and the trials, the tribulations, etc of being younger and looking for your way through love. (NB: He also explores a world of heady sex, hedonism of all kinds and jumpers.)

It’s worth noting that it’s a bold move to start the book with a thank you to your family, however, ironic, for ‘put[ing] up with my nonconformist nature, nonstop creativity and sheer genius for way too long’. I don’t know how he finds time for all of the heady sex and jumpers based on this, but I’ll have what he’s having please.

Things move quickly in this pamphlet, and they quite literally start at the speed of a moving bullet. In ‘Bounty’ we open with three single sentences in the first stanza,

It’s a cold and brutal opening, and it doesn’t let up thereafter because elsewhere we have lacerated body tissue ‘soaking the bathroom floor’ and a ‘medial temporal lobe screams’. The clipped lines and scientific language make the poem read like it is a set of observational notes taken during an experiment. In fact, it’s only in the final stanza where we go beyond the documentation and into any opinion or extrapolation of the data gathered in the preceding lines.

The poem appears to be suggesting that love is both the cause of pain and the cure, ‘fluoroantimonic acid’ being, of course, a “superacid”  (check it on Wikipedia).

As well as travelling forwards quickly as a bullet, we also travel rapidly backwards in time in the next poem, “Summer”. We cover 31 days of memories of a love affair in the course of a minute. The poem starts with

I wonder, in passing, if the comma at the end of line 3 should be there. Is it 31 days of pretty 8mm film, or 31 days of pretty what? Either way, the poem charts a whirlwind romance over the course of August, moving from the lovely juxtapositions of

After this and the fun and games that follow, the ’99 Flake’…’because us kids / deserve / a treat’ we get to the end of the month and where things turn literally and metaphorically sour

This in-a-blink-of-an-eye recall sets the protagonist up for a month of mourning, and by the end of the poem ‘summer/ doesn’t taste nice / anymore’.

Summer is a prevalent season throughout the book, not only in the July and August of the previous poem. Summer also makes its presence felt in ‘the curls of your chest hair on sticky summer nights’ in “Let Me Be” and in the ‘salmon sky in July’ of “Summer Tree” . The poem “Summer Tree” ends on a note of hope once the ‘salmon sky’ has turned ‘turbid’ after a missed love affair: we are told that ‘ the soil remains damp here’ and that this dampness feeds leaves that ‘…make the branches / profound and robust / again’.

Elsewhere in the book, July also serves as a simile for another missed love. In “Sunflower”, our poet is

The poem ends with the familiar concept we saw in “Summer Tree” of plants evoking hope and regrowth, ‘I plant a sunflower / They are perennial / Like my love for you.’

As we saw with the first poem, Jeetoo has a great way with an opening line and one that I’d like to draw particular attention to is that of “Elbow Kiss”. ‘Last night I dreamt about your elbow’. The poem makes reference to an old saying (I must confess I’d not heard it before) that suggests if you kiss your elbow you change genders, and this poem speaks eloquently of queer love and the attendant dangers of this in Yemen. In the dream

There is enormous sadness in the lines

and while the idea of having to change to adapt to these laws is terrible, there is a playfulness at work that cuts through it in the lines ‘I don’t want to change you. / Not all of you anyway.’

The found poem, “Alexa, Do you Love Me?”, toward the start of the collection features the aforementioned device responding to questions, and one that stayed with me is this.

We all are, Alexa, we all are.

There are a few experimental poems in this pamphlet that don’t quite work for me. For example I found it very hard to warm to anyone involved in the multiple characters of ‘My Jumper’—let’s just say if it was my jumper, I’d be furious. But there is much to enjoy in this pamphlet. It reads in many ways like a soap opera version of Black Mirror. And this is a good thing: our soap operas — when they don’t involve murder plots or the blowing up of lingerie factories —often project life as it is back at us . Alexa would do well to pick up a copy of this book, and so would you.