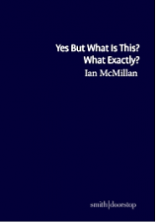 Poetry review – YES BUT WHAT IS THIS? WHAT EXACTLY? : Stuart Henson finds Ian McMillan’s poetry to be a mix of the good-humoured and the seriously thought-provoking

Readers of this column, as they say in the broadsheets, will be aware that I’m something of a fan of Ian McMillan. You know what you’re going to get: humour, compassion, a slant-wise look at the commonplace—a satisfying mix of wit and grit. This latest, from the indefatigable Smith Doorstop, won’t disappoint his legion of supporters, though the fun has some dark undertones and the imagery drifts on occasions from the intensely recognisable into the positively surreal.

All these from the title poem. A tad whimsical maybe, but the eight disconnected sections connect to register something about the ways we experience time—or time experiences us. Hard to say what it is, exactly, but you know that whatever you make of it, McMillan isn’t … wasting your time. His ability to let his imagination go off at tangents is so much part of the charm that I’m still not sure whether the notion of a man ‘stuck in a broken evolving door’ in the following poem, “Lighter”, is in fact a misprint. The image is of a terrace yobbo caught by the match cameras in the act of racially abusing the Brazilian soccer player, Fred. The fan is framed by the ‘door’, frozen in a shameful moment, ‘with a tabloid headline for a soul’. There are so many resonances, visually and psychologically: the figure trapped by the revolving door, helpless in his ignorance, silent yet animated… and unable to evolve beyond his Neanderthal responses. My money’s on a missing ‘r’ but as McMillan urges at the beginning of “The News”: ‘You decide.’

“The News” is another of those poems where the real and the surreal bleed into each other. The decision we’re asked to make at the outset is whether this item is headline news or merely one of those amusing incidents designed to lighten the mood at the end of a bulletin—so often introduced with the tag ‘and finally…’ The distinction is, I suspect, rhetorical. To begin with, we follow a Chaplinesque incident in which the speaker gets increasingly entangled in a dog-lead, ‘one of / Those long ones that stretch / To Doncaster.’ The dog’s owner tries to help but only succeeds in drawing him further into an impasse.

I’d like to think this is an indictment of those casual vox-pops the news media are fond of introducing at election time to explain the crumbling of the so-called red wall. It could, of course, be an argument against extending the franchise to dogs.

In my experience there’s always someone out there who knows more about what you’re writing about than you thought. Usually he or she is the first to raise a hand at a reading when the host asks, ‘Right, then! Any Questions?’ So I felt a bit boot-on-the-other-footish when I opened this pamphlet and found my home town up in lights on the first page. “Tone Found in Sonnet: a Murder Mystery” is one of those verbal squibs that would work nicely as an opener at a gig. It makes fun out of words hidden in other words: “Hope found in hoopoe”, “Routers found in trousers”—you get the idea. It also plays with the headline writer’s favoured ‘Man found in…’ construction. The ubiquitous ‘man’ is discovered in ‘woman’, ‘Manchester’, ‘Manitoba’ and yes, even in ‘Godmanchester’. (Godmanchester—accent on the first syllable—I should explain, is a modest settlement near Huntingdon, inhabited in the first century by the Romans and in the nineteenth and twentieth by generations of both sides of my family. There’s a charming Chinese bridge over the river Great Ouse, rebuilt in 1960 by my Grandad… Don’t get me started!)

As I’ve remarked before, there’s an element of stand-up in the McMillan skill-set, and we see it here in “Adult Audio”. Not exactly a mother-in-law joke, but one of those gently amused observations of the frailties of ageing in which

There’s always a bit more than comedy, though. Look at that simile that catches the embarrassed grandchildren trying not to laugh, and the shout-out capitals. The point is to do with the way words slip, slide, decay with imprecision. And there is a good gag at the end, which I won’t spoil.

It wouldn’t be Ian McMillan without a footie story too. This time we’re not at Oakwell but in a train passing one of those “grass roots” matches that spill out over parks and playing fields everywhere—when we’re not locked down.

The moment of the goal. The vector of the ball’s flight. Who else could express the ecstasy so perfectly? ‘A goal is a memory you always knew you’d have / Even before the goal was scored.’ It’s a thing you either understand or you don’t. Some of his fellow-passengers don’t—obviously.

There you go: the demotic ‘like’, and the canny choice of ‘a cave-painting’ for the simile. That’s art that conceals art.

The best thing about McMillan is that just when you’ve relaxed into a state of good-humoured enjoyment he hits you with something graver and more thought-provoking. “Three Flat Caps at the Bottom of the Stairs” is a bitter-tasting elegy for ‘Men dropped at the speed of dropped kecks / Down a hole in the ground to land lamplit / And gasping.’ It’s to the country’s lasting shame that the miners were treated so high-handedly in the Thatcher era, and McMillan uses the poem to redress that deficit of respect. The three caps remain on their hooks years after their owner has gone, and we are asked, quietly, to take one and ‘listen carefully: his breathing… like rain / On the bratish roof of a shed…’ But we are cautioned: ‘Don’t ever / Put it on. Don’t let the grandkids put it on. / This is as important a cultural artefact / As that statue of Churchill or the Queen’s head // You lick the back of every time / You send a card to a grieving widow.’

I’m interested in the way he deploys the pronoun ‘you’ at the end of this poem. It’s not, I think, a synonym for the posh ‘one’. It feels accusatory, angry. Who has been licking the backside of the establishment? Stamps are self-adhesive nowadays. Let’s hope it wasn’t us.

One of the craftiest pieces in this short selection is the enigmatic “Summer Dreams Ripped at the Seams” – the title, I guess, a never-such-innocence-again nod to the pre-digital world of Danny Zucko and the Pink Ladies. Both parts of the poem involve the recording and posting of video clips—the twenty-first century’s instant cinema. Here’s the second in its entirety:

See how the poetry lurks in that repetition in the last line—the paired lenses, the inscrutability—and maybe in the birdsong. And that dead-pan description: the McMillan observing eye at its sharpest. You couldn’t make it up. Or could you?