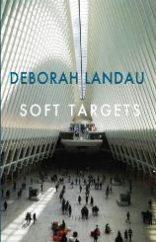 ‘Soft targets’: people, places and things whose accessibility and lack of protection make them easy objects of military or terrorist attack. Deborah Landau’s new book is pervaded by anxious awareness of our vulnerability. She’s particularly concerned with human violence, whether the random violence of terrorists or the systematic violence of the state (‘those nazis they knew what to do with a soft’) but also with environmental degradation and catastrophic illness. There are many brief evocations of beauty, love and pleasure but they’re always under threat. The very handsomeness of the book as a physical object seems designed to heighten unease. The cover photograph by Marina Gundske shows scattered people waiting in or crossing the World Trade Centre Transportation Hub and the title, hanging immediately above them in big block capitals, like a caption to the image, makes me think how exposed people in such a place are in a terrorist age. Inside the book, very wide spacing and copious blank pages break up the continuity of reading, adding to the general sense of agitation. You can see how the double spacing works in this almost unpunctuated section of ‘there were real officers in the streets’:

This seems to draw on images of the Nice promenade on the morning after the 2016 Bastille Day truck attack; but Landau keeps any reference indefinite. Thus the unperturbed domestic images of line 2, the untouched beauty of the sea, the aftermath of ‘the worst night’, noises from the Metro in Paris (where ‘there were real officers in the streets as a whole is set) and the unspecified future menace of ‘something is cooking’ swim together and splinter apart as aspects of one ongoing reality seen in a kind of delirious haze, where things appear both blurry and preternaturally sharp.

Though every phrase in that passage uses standard lexis and syntax, the way these phrases and images are assembled almost without punctuation creates a powerful sense of dislocation and unreality. Sometimes Landau uses language itself in a more radically unorthodox way that may work well for some but seems forced to me, as in the last lines of this quotation:

Two of the reviews quoted on the back of the book refer to Landau’s lyricism, very obvious in that last quotation. It’s blended with another side that impresses me almost as strongly – the way her writing is geared to dramatic performance. She’ll say striking things in the cadences of slangy, snappy speech, like ‘my jugular / there’s a soft target’ or ‘There were real officers in the streets / but they were doing it wrong’. It’s a vital strength in her enterprise. Much of the poems’ appeal is in the directness, intensity and combative vigour with which the poet dramatizes the anxiety, fear and indignation generated by the threats she confronts. But central to this enactment is the way assertions are constantly dissolving into uncertainty. ‘They were doing it wrong’, for example, can be taken and spoken in quite different ways – as challenging or as edgily apprehensive. And the lyricism itself is presented in an ambivalent way. Sometimes it has an overripe quality which I suspect is meant self-mockingly, as if the poet is asking herself how she dares to be lyrical in the world she lives in. Sometimes in fact she directly and explicitly attacks the self-indulgence of the lyrical impulse, as in these lines from ‘america wants it soft’:

Against all the odds, though, the lyricism continues to express the poet’s yearning for a more innocent, more humane and loving world, and hope never quite dies. The last words of the volume are