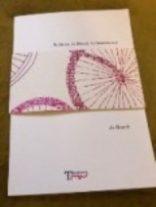 Poetry review – TO DARN, TO MEND, TO INTERWEAVE: Chris Beckett reviews a very personal collection by Jo Roach in which the past is intermingled with the present

Gosh! what a long time since 2002, when Jo Roach’s first pamphlet Dancing at the Crossroads was published by Hearing Eye and we all delighted in her tales of a London Irish upbringing. Now she is back at last to add the maternal strand of her Huguenot ancestors, weaving and darning the lines of her lovely title poem, so that her words follow her hands and her hands follow the skills of her ancestors.

The first poem, “City Child”, takes us back to the London streets ‘with their swagger/ and down at heel buildings’ where Jo Roach was born. She has ‘no where other to speak of’, and this where is full of the living but also the dead who ‘stand/ all around in this familiar place’. With astonishing simplicity, Jo tells us what her book will be about and that it is her life. She first gives us eagle-eyed portraits of her mother and father, full of period detail,

(that last item lifts the list to a wonderfully personal level). The poems then fan out to lists of streets and alleys, shops, churches, a constant stream of people from different backgrounds but inhabiting the same space. There is change but also a strong continuity with the past:

Jo’s poems enact this continuity by the way she paints portraits of dead relatives but also dead professions, like “The Costermonger’s Wife”, a self-portrait in the wife’s voice. And there is a depth to these poems’ concern with the past which is truly unique. In one of my favourite poems in the book, “Sometimes they surface as though no longer dead”, Jo references Adrienne Rich:

Rich talks about ‘the thing I came for/ the wreck and not the story of the wreck/ the thing itself’. That, it seems to me, is also Jo’s intent: not grief or nostalgia, not sentimentality (God forbid!), but a diving into the thing itself, because people/things/events take place in time but are not (or should not be) shackled to that time. Something that happens will always have happened. And that something/someone from the past is part of the present, part of us.

To make this point even more poignant, Jo has added a few pages of family photos from the forties and fifties which are immensely touching. They are stylish and full of life, you think “ah, that smiling woman in the lovely dress must be Jo’s mother” or “look! Jo with her brother and their friends…” But Jo does not name or date these photos. They are particular but also representative of their time and place.

From the bricklayer, just over from Ireland and standing at Speakers Corner, ‘who has yet to meet my mother’; from the repeated cycle routes which weave lifelines around Jo’s part of London; from the bubblegum pink corset that keeps on tightening around her mother’s waist, Jo’s poems darn, mend and interweave through a past and present which are beautifully united and renewed in the act of becoming poetry.