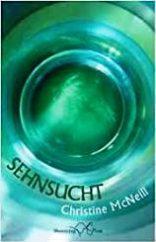 ‘Pride of place have foreign words / encrusted with meanings,’ says Christine McNeill in her poem, “A suitcase for my mother tongue”. As she is Austrian by birth, Sehnsucht wouldn’t be foreign to her, but it is certainly encrusted with meanings. Translated variously as ‘nostalgia’, ‘longing’, or ‘desire’, it sounds a little like the Welsh hiraeth, although without the Celtic emphasis on place. As well as making it the title of her sixth book of poetry, she also takes as an epigraph the beginning of a poem by the German-Swedish writer, Nelly Sachs: ‘It all begins with Sehnsucht …’

Knowing that Sachs’s poem is about the impossibility of fulfilling our yearning for love, except in God, certainly helps in reading McNeill’s poem, “In his employment”, about the relationship between a man and his secretary (‘I was fuel to his Sehnsucht’). It begins with her being forgiven for a mistake, when ‘his voice came, / like a hand putting pearls round my neck’ and ends:

McNeill isn’t wilfully obscure, but she certainly likes to ‘tell it slant’. A feeling for mystery is perhaps to be expected in a poet who uses the word ‘soul’ (five times by my reckoning) to mean more than just ‘feeling’. But these aren’t religious poems, other than in a general, pantheistic way.

Often the circumstances surrounding a poem are left deliberately unclear. “Outing”, the first poem in the book, is about a child being taken for a trip. It begins:

Freeing a stranded whale ought to be a good thing, but there is something ominous about this. At the most basic level, it could just be that the car seems large to the little girl, but it also places her in peril and implies that the car shouldn’t have been there in the first place, ‘parked at mother’s home’. The day, as described, sounds innocent enough:

but there follows the more sinister ‘picnicked in deep woods’. The suspicion that there has been more to this than meets the eye is confirmed at the journey’s end, when: ‘my heart slid out of the door— / ignition running like a tender muscle’. Has the girl been abused? Is it like a later poem, “Question and answer”, about a schoolteacher attempting to seduce one of his pupils, or more like the woman in “Missing”, who temporarily absents herself to get ‘away from dark feelings’:

The ambiguity in “Outing” encapsulates the child’s uncertainty both about what has happened and about her attitude towards it, ending: ‘and I too small to say what I felt.’

There is an extreme use of ambiguity in “Crossing”, where you aren’t—or I wasn’t—sure at first whether it was the partner or the relationship that had died, or was in the process of dying, or even whether the dead or living partner was speaking in the poem: ‘Be with me in this room where we / bed each night without words’ and ‘see with an inner light / my hand reaching / not meeting yours’. The title implies that it’s someone who’s dying and the last lines (‘Listen to my moving— / such a small step, / a bird’s hop— / I won’t be able to say afterward / what a huge distance it was’) suggests with the soul-as-bird image that it’s the dying person speaking. Even so, I was reluctant to give up the alternative readings: maintaining ‘negative capability’ as a reader makes the poem multi-faceted.

A number of the poems are epiphanies, often involving light, or the weather, or birds and usually revealing a connectedness to nature. Interestingly, in poems about nature, where other people are involved— for instance, the migrant birds and ‘the old man picking bus tickets / from a litter bin’ in “Kings of the air” or the heron and ‘an old man / watching a small boy running / round and round the blossoming cherry tree’ from “In a Japanese garden”—the human and non-human exist in parallel, the connection or connectedness being provided by the poem.

Other poems are more straightforwardly narrative or anecdotal and although it may be her home ground, McNeill doesn’t confine herself to the domestic: there are poems about music, art and literature, as well as Californian wildfires and Syrian refugees. There are also moving poems about death and dementia.

Her typical role is that of an observer (‘and I couldn’t change anything, / only watch’, she says of a hawk plucking a dove in “Summer afternoon”). Or in“Looking”:

She uses some arresting images to describe what she sees (‘A dormouse darts ahead / like a gloved hand’, ‘It is as if the chair you sat in / were beating like a heart’, ‘a radio voice / will pour like warm milk’, ‘listen to the lark / pull up its bag of trills / from the ground’). As well as the stranded whale and ‘ignition running like a tender muscle’, there is another image in “Outing”: ‘I drew the final minutes of the return journey // in long, winding threads’, which uses the idea of Ariadne’s thread through the Minotaur’s labyrinth to capture the girl’s eventual recognition of where she is on the journey home.

The book ends with a poem called “Epiphany”, although it isn’t a moment of revelation—rather the opposite. It concerns The Epiphany itself, or more precisely a memory of its annual re-enactment, as a woman looks out of her window:

This relatively straightforward account ends in a typically oblique way. There had also been a fourth child, carrying a sun stitched on a table-cloth (‘Where was the star-bearer? / Swallowed by fog?’) and we realise at the end of the poem (‘Her meal, unfinished / where the embroidered sun / lived on’) that this must have been her own son, his absence seemingly as much a mystery to her as it is to us, although ‘the frosty land / to a huddle of houses / beyond the cemetery’ and the sun that ‘lived on’ may be clues.

These quietly observant poems are anything but superficial. It’s a measure of their quality that one wants to return to them again and again to look for resonances one might have missed. Like the word itself, the poems in Christine McNeill’s Sehnsucht are ‘encrusted with meanings’.