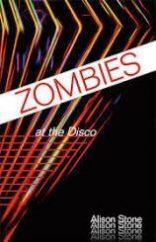 Poetry review – ZOMBIES AT THE DISCO: Charles Rammelkamp gets to know quite a lot about Alison Stone through her autobiographical ghazals

In one of the seventy-odd ghazals in Alison Stone’s remarkable new collection, “Poem Inspired by Channel-Flipping,” she writes

Discovering who this poet perceives herself to be is one of the distinct pleasures of reading these poems.

The ghazal is an ancient poetic form with roots in seventh century Arabic verse. In one translation, the word means “the wail of a wounded deer,” which indicates the longing and regret, the tone of unrequited love common to so many ghazals. So the ghazal is necessarily an introspective expression.

The form’s structure is likewise strict, consisting of a series of independent couplets linked by an abstract theme, by the repetition of a single word and by a recurring internal rhyme. The first couplet establishes the pattern. Take “Mystics, Hips, and Children.” The poem begins:

The governing idea is “fire.” The internally rhyming words, “send” and “end,” will echo through the eight couplets – “bend,” “comprehend,” “portend,” “high-end,” etc. Each line, moreover, is written in iambic pentameter, ten syllables per line.

The last couplet of a ghazal is often more introspective than the previous couplets, summing up and collecting the previous thoughts in a more personal reflection. Thus, “Mystics, Hips and Children” concludes with the poet addressing herself:

Some of the words that focus these almost six dozen poems include: “Grief,” “Silence,” “God,” “Moon,” “Desire,” “Israel,” “Shame, “Death” “Joy” and “Fear.” “Love” is the nucleus of three of these ghazals; “Sex” is another. “Loving Ghazal” concludes with the meditative couplet:

Similarly, the ghazal entitled and built around “More” concludes:

Yes, Stone, whose day job is psychotherapist, writing teacher and editor, has a lovely sense of humor, too! (If you don’t believe me, check out “Hell is Full of Country Music.”)

Family is an important theme in these poems, in discovering, or revealing, who Alison is. Dedicated to her paternal and maternal grandparents, the collection includes poems about Stone as daughter, granddaughter, mother, wife, lover. The very title of the book comes from the concluding couplet of the ghazal entitled “Less than Always,” whose governing word is “often,” with an allusion to herself, in her daughter’s eyes, at least, as a corny mother:

You can hear the kid again in “The Past”:

“Kid Ghazal” takes on motherhood again, in a more philosophical mood. “First came lust and wine. Then came the child,” the poem begins. The concluding couplet:

Later in the same poem she reflects:

Family is at the heart of “Technicolor Ghazal,” involving herself, her husband and their daughter. The poem, “Alone,” concludes:

But it’s the rock music references that I really love! Jagger, Bowie, Lou Reed, The Clash, Janis Joplin, Pussy Riot. My favorite? The sly reference to The Stooges’ “Lust for Life”: “What did / Iggy mean, had it in the ear before?” The poem, “Believing Punk” finishes with these lines of self-reflection:

Stone’s Jewishness is another important part of her identity. “Promised Land” considers Israel and its troubling treatment of Palestinians juxtaposed against the tug of “loyalty.” The final two lines of “At Work, in Bars” address her heritage as an American Jew:

The political component of these poems cannot be ignored either. They, too, shine a light on how the poet conceives of herself. “Poem Inspired by the Historian with the Loud Laugh” contains the lament: “We had a democracy, a middle / class,” and “The neo-Nazis march. Dog- / whistle slogans don’t conceal everything.” Later in the poem she alludes to Colin Kaepernick’s kneeling. “Start at Innocence” (“proceed to shame”) includes the horrifying reference to

So who is Alison Stone? A poet to admire, certainly, and a mensch with a sense of humor. Hell, I might even send her a Facebook friend request.