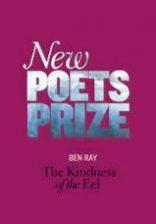 Poetry review – THE KINDNESS OF THE EEL: P.W. Bridgman finds both magic and hope at the heart of Ben Ray’s poetry

It is generally not considered to be the poet’s remit to give his or her readers hope. Indeed, the value of the poet’s work often lies, contrariwise, in its ability to reveal fault lines, to raise unutterable questions, to discomfit, to perturb, indeed, to transgress. Yet, it cannot be a legitimate criticism of a poet to say that—after traversing distinctly difficult territory in his or her company—one is left as a reader with a strange sense of uplift, of encouragement, of having been granted some unexpected glimpses of both our lesser and our better selves. This is the magic that lies at the heart of the poetry of Ben Ray.

Consider the opening lines of the short poem that gives the pamphlet under review, The Kindness of the Eel, its title:

One might not expect that that rather unsettling visual image, carried forward, would (or ever could) culminate a scant few lines later in an evocation of almost impossible human tenderness—tenderness that banishes altogether the revulsion that greets the image initially. But, suspend your disbelief. This is the wondrous sorcery that Ray, a modern-day conjurer, can work with language. And it is truly, elementally, transfixing.

The eel in the pamphlet’s title poem is a metaphor (of course) for language, for the intimate language exchanged by lovers—for words that, like eels, ‘do not stutter’ but ‘flow like liquid’. These words, Ray reminds us, ‘do not take more than they need / they are the best of us’. It is not surprising then that the words come ultimately to rest ‘when I sleep / curling into the nest of my inner ear’. The circle is thereby closed; initial horror is transmuted, fully and completely, into the transcendently sublime.

Without dwelling overlong on eels and their prima facie obscure linkages to young love (and skirting carefully around Freudian un-subtleties), it should perhaps be acknowledged that, in his improbable title poem, Ray has not ventured into wholly uncharted territory. Recall the tentative opening lines of Seamus Heaney’s ‘Eelworks’ in Human Chain, part I of which reads:

Eels—and more importantly the ways humans respond to them—comprise a complex subject. Even Heaney’s response to them was, at best, ambivalent. Elsewhere in his poetry, in part 7 of ‘A Lough Neagh Sequence’ to be precise, they reappear as ‘hatched fears’. And cast your mind back (with a shudder) to the place they occupy in The Tin Drum by Günter Grass.

But, commenting upon a passage in Graham Swift’s 1983 novel Waterland, in which students at school are invited to consider and introspect about eels and the curiosity they have provoked in thinkers and writers across the span of history from Aristotle to the present, Patrik Svenson offers this observation:

Ben Ray is very much alive to our ‘need for mystery’ as readers of poetry. Thus, beyond inviting us to rethink our responses to uninviting fellow creatures, he also takes us to places with which most of us who fill our shelves mainly with titles from the Western Canon have only a nodding familiarity and sets new clockworks turning inside our heads.

Ray has a particular fascination with Eastern Europe and its past—the former Yugoslavia of Tito’s partisans, the part of Eastern Poland that was annexed by genocidal Ukranian nationalists after WWII, the Warsaw of Lech Walesa’s Solidarnosc movement, Gdansk Harbour in the 15th Century, the Széchenyi Thermal Baths built in Budapest in 1913, &c. The poems that invoke these places and times show us that Ray views the world through a wide-angled lens, figuratively, in both the geographical and temporal senses. It is not only unusual but reassuring to find in a poet writing in English, especially such a youthful one. Whether this small-c catholic worldview is attributable to family ties, or travels, or just to an insatiable curiosity, is not clear; what is clear is that Ray brings a welcome and refreshing worldliness and cosmopolitanism (an old-fashioned word, admittedly) to his poetry. This is to be welcomed and celebrated, particularly at a time when internationalism and integrative state superstructures are in steady decline and a blinkered xenophobia is in the ascendancy.

At a somewhat lesser distance than Eastern Europe, we are introduced in the poem ‘Distance and Closeness: A Tryptic (sic)’ to the Rhodesia of Ray’s grandparents—its quirks and contours conveyed by overheard reminiscences in which images of the comforts and depredations of the colonial past bubble up ‘through the decades as if from an / underground spring’. The reminiscences roam, seemingly free of conscience, from the armed pursuit of game poachers to ‘regimental dinners fuelled by bush meat and sherry’, thence to ‘generations of faithful dogs, Rhodesian Ridgebacks large enough for a small child to ride around the garden’. This last example sets one to wonder: Is Ray gesturing metaphorically to faithful members of the Black servant class who, too, bore the weight of British colonialism on their backs with little complaint for generations, only to have their ultimate independence subverted by decades of further exploitation at the hands of Robert Mugabe and his ilk? Perhaps. And yet, and yet… Ray retains in his forgiving heart a great tenderness for his Rhodesian grandfather when he tells us in part III of ‘Distance and Closeness’:

As can be seen (particularly in the quotation above), despite his relative youth, Ray is astute to the risks that attach to the adoption of a blindly critical, harshly judgmental and unnuanced retrospective view of the way life was lived in earlier times. Would that more members of his generation might show a comparable restraint and attention to context.

Interestingly, Ray leaves us to wonder how two elephant tusks, four small African masks and a ‘signet ring belonging to Cecil Rhodes’ came to number among the contents of his grandparents’ luggage—a Wunderkammer filled with many other exotic objects, some real and some phantasmal: totems and trinkets forming a personal legacy that evidences a troubled chapter in British imperial history. Thus, he allows a conjured mystery to persist—one of many offered up by Ray which readers can then turn over in their minds and ponder like netsuke, mathematical puzzles or monstrous exhibits in medical museums, long after closing the covers of The Kindness of the Eel and returning it to the shelf.

It would be unjust to conclude this review without further discussion of one poem which has come up only obliquely to this point.

“The Banderist Grows Old” is a powerfully insightful meditation on evil, the unreliability of individual and collective memory and the reasons why we must acknowledge, with regret, that the great lessons of history have so seldom been well and truly learned.

Banderists comprised a Ukranian nationalist paramilitary whose members committed genocide in an ultimately successful effort, from 1943-1945, to annex part of Eastern Poland. Ray’s poem examines one of their number as he inches toward the end of his life in the present day. It shares the banalities of his daily existence; his daily meal consisting of ‘four potatoes, a carrot, a roll of bread’, for example. When he prepares a fish for his dinner, ominously he ‘slit[s] it smoothly / from neck to navel’. These banalities tesselate with other, darker yet murky truths:

The juxtaposition of quotidian details against naked evil in this way works, alchemically, to deepen the sense of dread in the gut of the reader.

There is a famous propaganda photograph of Hitler feeding baby deer that evokes the same kind of scalp-shiver as does Ray’s masterful poem. It was taken a few short years before the German Army invaded Poland in 1939—the country, still reeling, to which this Banderist, this ‘nation builder’, turned his imperial attentions a scant four years later in 1943.

Poetry like this—poetry that so adroitly exposes the nerve-endings that revisionism and faltering collective memory have covered over—serves a larger purpose in our troubled world. In this way, Ben Ray has joined the ranks of others such as Martin Malone with his The Unreturning and Jude Nutter with her I Wish I Had a Heart Like Yours, Walt Whitman. These poets too are concerned with war, the integrity of the historical record and the effect of that record on collective consciousness; their voices sound the klaxon and may unsettle us eventually into action to combat the complacency (and worse) that can lead to a state of affairs where ‘everyone has seen blood / and no one asks the other whose it was’. Writing like Ray’s (and Malone’s and Nutter’s) has the ability to burn through layers of mental fat and flense the atrophied conscience.

If read and taken seriously, The Kindness of the Eel will be a gift which will redound, ultimately, to the benefit of future generations. It is in this that poetic writing bearing, alongside its profound tenderness, such dark recesses can still produce a strange sense of uplift, of encouragement, of having been granted some unexpected glimpses of both our lesser and our better selves. This, in the end, is the magic that lies at the heart of the poetry of Ben Ray.