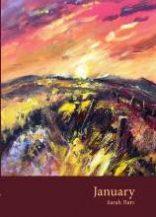 I enjoyed reading this beautifully produced first collection by Sarah Barr. The attractive painting of moorland on the cover invites us to open the book, which starts, appropriately, with “January”, a prize-winning poem from 2015. The twenty-five other offerings are succinct observations on the unspoken, on regrets, and on weather that often reflects moods and thoughts in unpredictable ways. An ice hotel is ‘comforting and cosy’. The floods mentioned in “January” make the speaker ‘shiver with excitement’ as the world about her changes and offers new possibilities. Sometimes the environment outside the house is less stimulating, as in “Blue Monday”. Such days are short and moonless. The poem starts ‘She’s having a personal power-cut’, a metaphor that cleverly summarises the lack of energy we can all feel during winter. Death lurks in the text when the subject wonders how to spell ‘cemetery’ and then receives a phone call about scattering her uncle’s ashes. In a few short stanzas, Barr conjures up the way our zest for life can leach away during dark, wet, short days.

A topic that appears frequently in this collection is the lack of communication between couples, succinctly conveyed in poems such as “Walls”. “Making Tea”, “Drinking Coffee” and “Autumn in Venice”. In “Birthday” ‘Everything’s been said / and written before. A morning walk.’ However, an error on the part of the speaker’s partner takes them on an unfamiliar route that leads to the following thought:

She doesn’t voice this surprising idea out loud. The menace of an uncertain future weaves through the poem even though the couple agree ‘it doesn’t matter which way we take’. For us, as readers, the tension remains. Forgetting the path on this celebratory day seems to imply a much larger neglect of both the narrator and of global concerns.

Troubled relationships are also explored in “Reservoir”, a poem of well-crafted three line stanzas in which the narrator dwells on what is not discussed – her Dad, a brother’s anger, the sale of the farmhouse ‘at a knock-down price’. Here are family secrets that are dangerous, held precariously behind a wall of complicit silence. The poem ends:

The reservoir provides a powerful image of the risk of damage if certain subjects were to be discussed and the floodgates were opened.

In contrast, “Orchids” demonstrates Barr’s self-deprecating humour as she neglects the plants but they manage to survive and flourish.

This delightful description captures the unusual appearance of the flowers. The orchids exert a power over the narrator and she ends up polishing their leaves, stroking them and feeling she has to ask their permission to go out, a pleasing turn of events.

One of my favourite poems in this collection is “Fog”. The delicate imagery used captures the transformative nature of this strange phenomenon:

The narrator compares fog to ‘forgetfulness wrapping round me’ and relishes the way it changes her perspective.

I also enjoyed the glimpses Barr gives us of other people’s lives in “The Couple Upstairs”, “On the Bus” and “After”. Their backstories linger but we are given only brief, intriguing encounters with the characters, leaving much to our imaginations. This is skilled writing, by a writer who knows when to stop and invite the reader do the work.

January is a varied, accessible collection of poems filled with understated emotions from a writer who is practised and confident in handling the profound with a light touch.