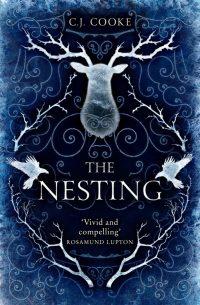 C.J. Cooke, also known as Carolyn Jess-Cooke, is formidable in her achievements.  An award-winning poet, novelist, academic and mother of four, her latest work is a text-book example for her creative writing students of how to write a tense page-turner that presses all the right buttons.

She does not disguise that it is a result as much of perspiration, albeit in a cold climate, as inspiration.

An afterword tells us of her call on her Facebook page for suggestions on a setting for her tingling thriller that led to the choice of Norway, where she carried out meticulous research.

The resulting novel is almost architectural, with its twisting chronological structure, buttressed by Nordic folklore and by the fashionable and related themes of mental health, motherhood and humankind’s often dysfunctional relationship with nature.

The gerund of the title is perfectly in keeping with all that and with the nestling, which is one of the many characters, human and otherwise.

They are led by Lexi, who is even endowed with a necklace inscribed with the word “protagonist” – ironically, given that, as a failed suicide, newly split up from her boyfriend, she feels anything but the main woman.

Reaching rock-bottom has an element of liberation, which drives her to assume a new identity as Sophie and bluff her way into a nannying job in remote Norway, where she is charged by widower and architect Tom with bringing up his young daughters while he builds “Aurelia’s Nest”, which should have been for his late wife, who is believed to have committed suicide.  But did she?

On top of the basic plot, we have so much more besides.  Nightmarish creatures come and go, Tom’s partner Clive is a serial cheater on his wife Derry, while Maren the housekeeper broods in an attic over her late sister and her long-lost career as an artist.

Cooke coolly ties off almost all the loose ends and offers a sufficiently redemptive ending to make this a cosy Christmas read.

The biggest unanswered question is where will Cooke’s Facebook followers send her next?