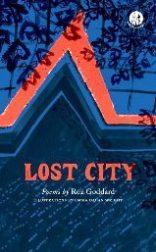 It’s difficult to resist the bleak just now. This book ‘examines the impact of post-industrialisation and the effect of toxic political leadership on the collapse of cities and communities’ and hence you might expect the ‘loss’ in the title to signify total loss.  After all, it’s not only material indications of civilisation that are struggling to survive, but our capacity to comprehend. In ‘The Tour Guide as Bird Watcher’, a bird ‘Scratches out lines in soil we try to know,/meaning: grace in rain, meaning: element,/meaning: home.’

In spite of all this, however, the book is surprisingly full of comforts. This is from “The Photographer”:

These ‘sudden things’ and the possibility of finding solace in the everyday recur, frequently illustrated by the encroachment of the natural world upon the one that humans have given over to decay. In “The Tour Guide Leads A Group Through The Museum of Blue Delicacy”, where

the desolation is explicitly ameliorated:

It’s not just consolation that’s hinted at here. That exhortation to hold stars in the emptiness, despite it all, is also a point of resistance. This defiance is also conveyed in Goddard’s attitude to near-contemporary politics, which is run through with an eviscerating wit:

It’s hard for me to read Lost City without bringing to mind Helen Ivory’s conceptually similar chapbook Maps of the Abandoned City (reviewed here) in which she ‘imagines a place deserted by its makers.’ But if the best of Ivory’s work is elusive, surreal, then Lost City – although no less rich – might be best defined by its intent and the readiness with which it can be grasped. As an example of what I mean by this, here is “Citizen”, one of many excellent poems in this excellent sequence, quoted in its entirety: