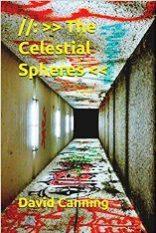 Whenever I have had the pleasure of reading David Canning’s poetry I have been impressed by its immediacy and muscularity, and this collection does not disappoint. Canning, who as well as being an excellent poet is an experienced mountaineer, shows his strength of expression right away in his poem ‘North Stack, Gogarth’:

Early on he includes a found poem, ‘Men Wanted’. It is examined towards the end of the book, where Canning has, for our added interest, provided notes on the poems. ‘Men Wanted’ consists of the wording of the newspaper advert seeking crew for Captain Scott’s first Antarctic expedition, as placed by Ernest Shackleton. The last two lines read: “Honour and recognition / in case of success” – lines which would apply to any climber who succeeds in negotiating the wall of North Stack (I’ve seen the photographs).

While dividing the collection into six main themes, Canning constantly varies his ideas. In the section titled ‘Wisdom’ there is a standout poem ‘Lazarus’ Lament’ which, in a few free verse couplets, hits the reader with a sequence of images of the fleeting impressions felt by Lazarus of what it must be like going through the doors of death into whatever strange afterlife lies beyond: “… a book in which the last words are missing, unwritten.” Then in ‘The Sculptor’ he kickstarts the poem with the intense imagery of:

And what of the Celestial Spheres? Rather than being abstract cosmological models that might perhaps influence human affairs, these Celestial Spheres, in a series of brief poems and single stanzas, encompass the various orbits of a group of friends around each other. They detail a number of episodes in a party which “Fi has arranged … for Tim’s fortieth birthday”. One of the friends, Jaks, is sharing a smoke outside with Fi, and her circular thoughts, like the smoke, take on a celestial quality:

Later, and most evocatively,

We are present at a mysterious soap opera, and as an added quirk in this intriguing section, Canning provides footnotes to each short verse to give individual detail to his cast of characters. There is even one bonus poem among the footnotes, ‘Laundry Day’, as penned by the fictional Jaks.

Following this central section there is a galaxy of strong poems, collected in groups under ‘War’, ‘Love’, and ‘With the Angels’. They are replete with Canning’s knowledge of exotic places and people. ‘In the Tunnels at Lagazuoi’ was of immediate interest, partly because I have had experience of partisan tunnels in the hills above Lake Como, but the name Lagazuoi was unknown to me. In fact, the Lagazuoi tunnel system is one of the most extensive World War I remnants in the Italian Dolomites, and to read this poem was to be taken into a “labyrinth (which) held a madness half-human:”

As well as to the Dolomites, David Canning takes us in his poems to a Souq in Damascus, to the St. Martin Canal, to Ibrahim’s Garden Centre, to Varanasi, and to the Essex Marshes. He introduces us to his Nonno, to Flemish merchants, to the Enemy “We have met the enemy and he is us”, and he recalls a Sacred Space of polarity: “… the lines of magnetic flux / invisibly wiring the space between us / herding our atoms …” Towards the end of the collection is a poem, ‘One Last Coffee’, so full of pathos, finishing with:

‘One Last Coffee’ could well have stood as the final poem, but I am more than content to settle for his Essex poem ‘Tollesbury Fleet’ and its valedictory last two lines:

Take it from me, David Canning’s poetry is strong, steady, and sublime. And the book has a smashing cover illustration …