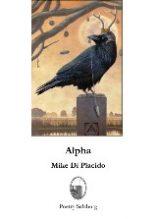 Mike Di Placido’s fourth collection explores his heroes and anti-heroes, the Alpha types of the title. All male, of course; that’s the nature of heroes. Yet it’s more than this. It’s also a collection that reflects on distance. In writing about the difference between their lives and his he can exploit to the full his particular brand of self-deprecating humour. This unites these poems, along with the bathos inherent in comparing himself to the Greats, whoever they are. It’s a framework which provides a way into some tentative probing of his own life; the Alphas have all the grand gestures and glory, leaving him with their opposites. Mike Di Placido gets the mundane chores of a sub-alpha life devoid of celebrity, just like the rest of us.

The final poem (generally a good place to start reading) is a haiku — ‘Alpha’ — that sums this up perfectly:

If you even think that question, let alone ask it, you know the answer already; in unassuming language, in the most modest of poetic forms, the poet has positioned himself where he can only look upwards. The opening poem (generally the second-best place to start reading) plays with an alpha-name that’s a near match with the poet’s — ‘Al Pacino’ — but that’s as close as it gets.

The hope, the eagerness for a touch of glamour, all shaped by the charity shop fashion and the possibilities offered by the local precinct; these are beaten flat in the stanza’s final line, with its triple negatives and two caesurae. Ambition doesn’t recover from that sort of treatment, despite ‘…according to his sister,/ he still had it in spades.’

Not all the poems are from this first-person perspective or through the prism of comparison; we see — among others — Sir Paul McCartney (‘Sir Paul Remembers’ and ‘Sir Paul at The Glades’) as simple third-person portraits, Dylan Thomas through Caitlin Thomas’s eyes (‘Boathouse’), and Wilfred Owen in a sequence of five poems set in 1917-18 from his five addresses in North Yorkshire. As that indicates, this collection has variety in tone and not all the poems are light. Here we see Owen approaching Siegfried Sassoon, ‘the great man’ in Owen’s eyes; it’s a recognition that there are shades in greatness and that while Di Placido can have Owen as a hero, Owen could see Sassoon in the same light.

Despite the range of muscular heroic types such as Attila the Hun, Harald Hardrada, and Genghis Khan (seen as he disembarks from ‘… the Orient Express’/ new branch line to Scarborough’) it’s the less high-profile heroes that offer more to Di Placido’s formal armoury. Monty Don and Barry Bucknell (the popular star of DIY on TV in the 1960s) feature in a poem apiece. When a poet brings an expected background into play — and Di Placido is an ex-professional footballer — there is also the opportunity for new subjects. ‘The Beautiful Game’ celebrates, in four unrhymed couplets, the toughened heroes of the pre-balletic game —

He celebrates George Best in two poems, ‘Goal Scoring’, about different ways in which the ball can be sent into the net, and ‘Miracle at Stockport’, when Best, beset by personal problems but still retaining his genius, had left top-flight football to play for a series of small clubs. This is one of the poems to feature in the Notes, and although it isn’t relevant, Di Placido can’t resist giving the goalkeeper’s name. This will matter to readers who are football fans. I’m not but I can still appreciate why this detail was irresistible to Di Placido. These Notes are variable in relevance and there were times when I’d have liked confirmation of the true identity of some alpha-males; I’m sure there are film, music or football references I’ve missed, and which might have added an extra of layer of enjoyment to the poems. But Notes, and what goes them, is an argument for another day.

I’m on surer ground when Di Placido chooses a poet as an alpha-male. ‘To R.S.Thomas’ is directly addressed, taking as its epigraph a line from an interview with the poet (in The Independent) in 1993, about the relationship between God and poetry, and questioning how Thomas changed his views as he aged. The poems — ‘… those chiselled, austere,/ persistent attempts to explain the unexplainable’ — are markers along life’s path, until Di Placido ends

In ‘Meeting T.S.Eliot’ he imagines a lunch in which Eliot, despite being unobtrusive and courteous, is a foil for the unbridgeable distance between one (alpha) poet and the (sub-alpha) other.

Imagination can be very cruel. Fortunately for this collection a real-life meeting (‘Meeting Simon’) is somewhat kinder. To show it’s a treasured memory Di Placido gives the full address and date as a sub-title; because the setting is Huddersfield he doesn’t even have to give the poet’s full name. Even so, Di Placido can’t be at ease in the situation of the poem — ‘We were getting on famously till I started to choke—/ too many fluffy nibbles and not enough tea.’ But it’s a chance to pick up and play with the Al Pacino reference from the opening poem, and to raise the idea of Pacino’s menacing film roles, before Armitage leaves, to make ‘his way back to his golden life.’ It’s a funny, self-effacing poem.

While an alpha-poet has a gilded life, Di Placido has a shed to write in; another example of how distance appears in various forms. The most inventive of the prose poems in the collection is ‘After Ulysses’, where Di Placido borrows the interrogative style of Chapter 17 to probe the poet’s attitude to his shed. At one page in length this tight focus is effective; less so are the five pages of correspondence (prose) between John Keats and John Ashbery. The Notes tell that this was originally submitted as a Poetry MA creative writing piece and that, for me, explains why it falls short of the rest of the collection; it’s an exercise rather than a poem springing from the poet’s on-going relationship with his subject, a subject that at its best draws universal truths.

That truth, of course, is that none of us are in the alpha league. It comes over best in ‘Mallory’, a short poem commemorating the mountaineer who disappeared during his reconnaissance of Everest — ‘shinning up there/ as though it were Scafell/ on a good day.’ He’s a true Alpha. The poem looks at how far above all of us he is —

Through these poems Di Placido stands in for Everyman, living the life we all recognise in ourselves, with rueful good humour and eager curiosity. This is a collection to savour.