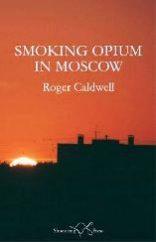 Poetry review – SMOKING OPIUM IN MOSCOW: James Roderick Burns admires Roger Caldwell’s use of poetry to delineate and then demolish a number of illusions cherished by western culture

Caterpillar soup. Underneath the elegant surface of Roger Caldwell’s long, sustained poems – grouped within this collection into three broad themes, dealing first with myths, then key moments of 20th century artistic history, and finally the geography of contemporary cultural life – this is what human preoccupation, story-telling and delusion boil down to (quite literally):

The stripping away of illusions, especially from European high culture, to lay open the brute, skinned reality of power is a constant theme. It is hard to read ‘The End of Thorolf Twist-Foot’, for instance – charming as its verbal woodcarving undoubtedly is – as anything but an acid commentary on the last days of Trump:

While in several poems Caldwell, like Larkin, is careful to underline the ongoing necessity of kindness – “what matters most/is a capacity for kindness” (in a poem of the same name) – that same poem concludes matter-of-factly, “and for telling lies”. It is in the lies that the poems come alive.

To echo ‘Bishop Berkeley on Ideas’, Smoking Opium in Moscow has “a surplusage immeasurable of things” in this area. ‘A Plea for the Dead’, appearing at first glance to be an upbeat, almost satirical take on notions of fair treatment, argues that compared to other human classifications and points of identity such as race, class or gender, deadness doesn’t appear to get a decent shake of the stick: “you don’t look at your best when dead,/you’re not skin and bone any more, just bone”. But the light, glancing tone becomes more sombre the further the poet drills into his subject, so that by its conclusion, we are moved by a genuine plea for human understanding – compassion even – which he hints is in short supply in this world:

Always we are brought back to the grim realities below the surface. In ‘The Great Highway’, an epic contrast between the first historic passage of an imperial parade and its later, enfeebled incarnation, we hear “of all the elephants, a single one was left/and that so shrivelled, feeble, woebegone,/unfit to bear a catafalque/we would have laughed had we not pitied him”. As ever, the poet is quick to note the best reaction to such revelations – here pity, elsewhere in ‘Blood on the Keys’, the composer Shostakovich’s gradual grinding down (or perhaps bearing up) beneath the boot-heel of official Soviet conformity:

In similar vein, Sir Anthony Blunt hints at the gravity and inevitability of this process, as though his principal focus (art history) and secondary, real purpose (spying and its consequences when the subterfuge is revealed) were simply related parts of the same system, and not disparate matters of life and death. Indeed, it could be said that the book itself presents this argument obliquely – we are all engaged in surface pretence, be it Trump’s risible gold toilet or the subtler illusions of high culture, but just as sure to be exposed all the same, to have our noses rubbed in unadorned reality:

Oddly, the title poem – a long, dream-like meditation on the oddity of the familiar English pub-scene after a drug-inflected flight back to Britain – is one of the few in the collection to push for another possibility, perhaps a way out of the relentless equation suggested by the rest. “Neither quite awake nor quite asleep/but drifting in a sort of inner space”, the poet trades social niceties with his friends rather than acknowledge what he had been doing, “but that I felt the need to hold my tongue … made for a difference, opened up/a gap between us that could not be closed”. It is almost as if drug experience, the literal, deliberate removal of the faculties from the world, is all that will stop us being painfully aware of the real gulf between “how Melanie had taken up with Tim,/why no one went to the Wheatsheaf anymore” and the crashing horrors he describes in other poems.

If so, it is a noble but a doomed effort. The collection excels in first drawing, then exploding, the gilded illusions of western culture. It leaves us, as Larkin put it, “the less deceived”, but also hungry for a time when the golden carriage of the emperor could pass stately onwards, and not return a broken box accompanied by one solitary, exhausted pachyderm. Perhaps poetry itself – that captures and plays with these contradictions – is partial consolation.