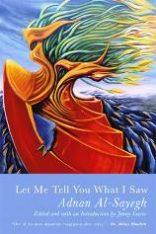 Poetry review – LET ME TELL YOU WHAT I SAW: Ruth Valentine reviews a well-made selection of Adnan Al-Sayegh’s vivid and disturbing poetry

Let Me Tell You What I Saw is a bilingual selection from Adnan al-Sayegh’s 550-page poem Uruk’s Anthem, written over twelve years, between 1984 and 1996. During those years the poet was variously conscripted into the Iraqi army for the devastating Iran-Iraq war, imprisoned in a military detention centre, and living in exile, first in Sweden and now in London. The range of those personal experiences would be enough to fill more than one collection of poems; but this is a more ambitious project:

We are in ancient Uruk, the Sumerian city on the Euphrates; but equally in any modern city, and in medieval Persia with another poet, Omar Khayyam. This is an epic, but not in any narrative or chronological sense. The structure is subtle, moving from visions of historic and modern events, through exile, to an impassioned questioning of the country’s destiny. It is an intuitive account of the poet’s existence in the context of history: the history of his country of origin, of world culture, of its own moment. The narrator tells us ‘I saw’, ‘I heard’, ‘I dreamed,’ and these act as repeated jump-cuts between one era and another, one place and another, between cultures. We meet Tiresias, Lorca, Hikmet; we visit, in passing, Karbala and Sarajevo; we face the interrogator across a table.

In an afterword, we are told that Jenny Lewis worked with both Al-Sayegh and the Palestinian-Lebanese poet Ruba Abughaida, to create a musicality equivalent to the original. Line-lengths vary, at times terse, at times into prose-poem. Layout on the page creates pauses, silences, delayed shocks:

It’s the detail that assures us that this is more than a rhetorical device: the tobacco hidden in the blanket, the callous greed of the guards.

One repeated motif is the General, the autocratic ruler of any era.

The narrator is never simply a victim, whatever pains he undergoes. He and his compatriots, perhaps all of us, are made complicit. Here he conjures a sniper, and his own reciprocal gun:

This is a book to dwell on, to deepen one’s understanding reading by reading. The introduction, by Jenny Lewis, and the copious footnotes, help the non-Iraqi reader to gather knowledge of the poem’s context and the poet’s wide-ranging cultural references, absorb them and return to the text itself. I don’t know Arabic and can’t judge the translation in terms of accuracy or faithfulness of tone; but my concentration was very rarely broken by an awkward phrasing. The imagery, the sensory detail, will in any case speak beyond the limits of translation: the war ‘smokes you like a cigarette;’ ‘we carry our mats like a country/and fold them quickly/whenever the security forces raid us.’

Hearing Adnan Al-Sayegh read his work in its original language is a pleasure to be sought out, whether or not you know Arabic. In the absence of live readings, his own website is a starting-point: http://adnanalsayegh.com/eng/. Meanwhile, this monumental work of collaborative translation is an exciting, disturbing, enlightening introduction.