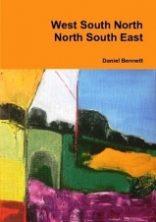 The title of this collection suggests a journey that isn’t linear and doesn’t follow a logical course round a compass, but one that is a series of steps forward and then steps retraced before it moves on to a new destination. There are a number of difficult journeys made throughout the pages of West South North North South East including the one made in the opening poem, ‘Lorca in South London’. Firstly, and aside from any actual journey from Spain to South London, there’s the journey that must have been made through time to get to our modern times; and so lines like ‘The duende of a mobile phone’ or

all place the poem in the here and now. This poem could be said to act as something of a template for some of the themes that run through the collection. A key one of these is that of the mundane rubbing up against the fabulous or fantastical like Tectonic plates. These plates then create some quite magnificent eruptions. Before we move to other poems and illustrations of this theme, this opening poem starts with just such an eruption. The first words of the collection are ‘A bullet and a song.’. An amphibrach and an anapaest, but above all it’s a juxtaposition of violence and beauty which, to a resident of South London, makes absolute sense.

These acts and or descriptions of violence are also to be found elsewhere in hints and in more blatant acts throughout the poems. There’s the barber that ‘handled clippers / as though she was shearing sheep/’ in “Number One Haircut in Town”, or the ‘machinery chewing through the woods’ of “Memories of the Perfect City”, or the first world war poem “Centurion”— dedicated to the poet’s own great-grandfather – with its ‘steel fires (that) spilled / where once we saw / bracken and thicket’ and children that ‘chose new weaponry’.

However, the most disturbing act of potential violence is for me in the unexplained disappearance that occurs in the long poem, “Landscape with Man in High-Vis Jacket and Alpaca”, where the aforementioned man, along with his jacket, has disappeared from his lodgings in a tent in some woods. The ‘uniforms’’ of the police are searching for him with ‘Dogs springing at leather, / they whipped at grassheads / with truncheons…’. Outside the man’s tent they found his belongings, including an enamel mug that is referenced later in the poem, and call out to the man: ’No one answered’. It’s a classic example of show, don’t tell and only serves to ramp up the feeling of dread within the poem.

While the title of the third section of this book and the first poem in that section, “Landscape with….” is also a fair assessment of another theme in the book, that of humankind in nature, and of humans finding a place within nature. Scattered throughout the collection are occasions where humankind comes face to face with nature’s brutality and comes up wanting. In ‘Rewilding’ we see the protagonist coming to terms with being in the city (among other things—questions must be asked about the mental state of the character in this poem) during a walk in the small hours of the night, perhaps because they grew up somewhere a bit more rural.

The person in the poem notices ‘Quick roots / sneak ingress into gaps and flaws’ and ends the poem with ‘Have you noticed / how quickly things fall to the weeds?’. However, this desire to be both in and out of the city really comes alive in “Memories of the Perfect City”, which is both the title of and first poem in the second section of the book. In the poem we’re told ‘The perfect city predated the city. It lay in a hectare of damp fields, / formed out of pylons and the reach of old oaks along the hedgerows.’ However, for all of the visions described in the poem about the perfect city, ‘a sky filled with transparent slides’, etc, it is a city or ideal doomed to failure as the land reclaims things, as with the fall back to the weeds in “Rewilding”.

That quiet soaking into the ‘weft of the land’ is something that keeps occurring in these poems. In the second section of the book there are countless references to a past in rural surroundings. For example in “Dry Dock”, the poet recounts a time somewhere near the edge of water with a child, they paint a beautiful scene of

as they discover a boat out of the water for repair. But the story takes a darker turn as the parent states that

There’s a lot going on there: is the seed being pushed in the memories of the boat’s discovery, the surroundings, or the false memory of being left alone/abandoned? Either way, it harks back, again, to “Rewilding” and its ‘Dry seeds / tick on grey slabs.’ It’s also another example of those tectonic plates rubbing up against each other to create something volcanic. It adds a whiff of sulphur to the salt of the ‘bitten coast’ that I really like.

Speaking of which, this is a collection that is richly scented and flavoured. I’ve seen poets making playlists to accompany their book launches and would argue that a perfume range would have been the ideal promotional material for this one. The sense of scent is at its most pungent in “Three Scent Bottles” and its references to ‘the white days of musk / and paraffin’, ‘Orange pith and leather seats’. ‘juniper and cardamom., ‘The whiff of stinky tobacco’ and ‘iodine and fishguts’. These are all richly evocative prompts, but there are more to be had in poems like “Acton, The Solstice” where

The flavours come in “Still Life”, with the ‘light zingy sugars’ of apples that ‘began to make our throats burn / like pollen in honey’ before they rot and ‘slumped into themselves’. However, the last lines of this particular poem feel to me like a neat summing up of the themes of this collection, the poet states

Despite or because of all of these leaps, juxtapositions, back-tracks and unreliable narrators that appear throughout West South North North South East it takes a while to give a sense of who the person or people at the heart of these poems are or where they came from. They are not straightforward; their lives are never simple, but as Bennett states in “Bones”

And this is collection is a highly successful and enjoyable raking through those bones. The last lines of the final poem, “Boxes” in this collection are ‘and I should have been sad, but really / I felt proud of what I left behind.’ It’s fair to say that Bennett should be far from sad at his achievements in this collection and very much proud.