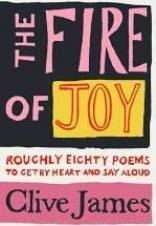 The Fire of Joy

THE FIRE OF JOY: Edmund Prestwich looks at a very personal poetry compilation by Clive James

One of the great things about The Fire of Joy is that the author doesn’t get in the way of the poetry he’s presenting. Learned as he is, able to read Dostoyevsky in Russian and translate Dante from Italian, he writes in a straightforward, chatty style as someone who’s read a lot of poetry, takes passionate joy in it, and wants to share that joy with other people. But it’s a key assumption of his approach that the poems he’s chosen will essentially speak for themselves. He says as much in the introduction:

Letting poems speak for themselves is trickier than it might seem. Obviously a reader expects more from this kind of book than simply the poets’ own words or he’d just pick up an anthology. However, in selections of poems linked by comment one often finds the discussion killing the poetry; it may be clever and interesting in itself but takes the form of an argument that demands critical concentration of a kind that closes the doors of the imagination. The temptation is to stay in this state of mind even when one’s trying to read the poems themselves. James knows that the key function of the commentary is to let the reader relax between poems, clearing his mind of one voice so that it’s ready to receive another. For the most part he keeps his bridging passages low key, jokey and anecdotal. I found some of the jokes and anecdotes tedious, but this wasn’t a miscalculation on James’ part. The slackening of concentration in the commentary passages made the poems and James’ own bursts of penetrating observation ring out unimpeded.

The poems aren’t chosen by theoretical principles; they’re ones James has gone on remembering and loving. How important they’ve been to him is indicated when he says, ‘The poems I remember are the milestones marking the journey of my life’. Of course this means both that there’s an accidental element to the selection and that it’s strongly biased by his personal taste. What this taste most obviously leans towards is sound, vigorous, expressive sound riding on strong rhythms. James writes,

Like James, I get my keenest pleasure in poetry from its sound and the kinetic life of its syntax but the emphasis on declamation indicates a narrow sense of how sound works in poetry. There’s no Longley here: his quietly musical radiance seems to be out of the range of what James enjoyed. Some of the most beautiful auditory effects of poetry are too subtle for a declamatory delivery, often using the synaesthetic effect of visual signals to speak to the reader’s inner ear, which is more delicately attuned than the physical one. A simple example would be the way the mouse’s voice in Alice in Wonderland’s ‘The Mouse’s Tale’ seems to get softer and softer as the print gets smaller. Eliot, Pound and Geoffrey Hill, all magnificently auditory poets, all also use visual signals to complicate and subtilize the auditory impression that our inner ear receives. It’s noteworthy that although James tells us that his friend the art critic Robert Hughes could quote the whole of Four Quartets from memory, the Eliot he gives us is ‘La Figlia Che Piange’.

And yet what riches that poem falls among. Many of James’ choices are so shiningly wonderful that however much they may be anthologized it’s simply a delight to read them again. Others, like Fulke Greville’s darkly magnificent ‘Chorus Sacerdotum’, are probably much less well known, though in that particular case I can testify to its memorability from my undergraduate days. And there are yet others that I was delighted to be introduced to for the first time. Roy Campbell’s ‘Choosing a Mast’ was the outstanding example here, as fluently brilliant in its metaphors and phrasing as in the dynamism of its metre.

And the commentaries are certainly not mere fillers. They can be exasperating but sprinkled through them are gems of perception and provocation. The two most brilliant paragraphs in the book compare Carol Ann Duffy’s dazzlingly mobile, ultimately sad ‘Mrs Midas’ with Amy Clampitt’s ‘Good Friday’ but they’re too long to quote as a whole and too tightly knit to quote in part. More often the weave is looser, the flashes of illumination more intermittent. Intelligence, wide culture and a brash, devil may care confidence in what he thinks and feels all go into the mix. Writing on Wallace Stevens’ ‘The Emperor of Ice-Cream’ James shows his appreciation of the early Stevens’ ‘delicious fantasy’ and the joy of his sound:

He’s provocatively severe towards the later Stevens, who he thinks ‘matured into a fluent fossil’, but the exuberance of his response to this poem is underwritten by his honesty about what he didn’t notice in it:

On its own the book’s title suggests the different kinds of passionate joy in poetry felt by its creators and readers and the way this joy leaps from one to another. It may also suggest a community gathered around a common hearth. I’m sure such suggestions are deliberate on James’ part, but he has something more specific in mind too, a concrete image of the relations between tradition and individual talent explored in more mandarin style by T S Eliot in his famous essay. In his introduction he explains that

All in all, we’re lucky to have this last book from the keyboard of Clive James, with its invigorating combination of irreverence and celebration.