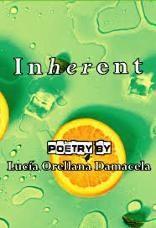 The author of this collection currently lives in America but she was born and raised in Ecuador, which accounts for the huge influence of that part of the world in these poems. At the centre of many of the poet’s lingering memories is Abuela, the grandmother, whose skill at gardening and cooking is treasured and commemorated with a deep reverence.

There is a great sadness that permeates much of the collection, a longing for the past, for warm seas, sunshine and the lifestyle that goes with these things. The poet clearly values her heritage and feels the loss of those who made her and blessed her with their wisdom and attachment to the homeland. At times, these elements are so heart-felt as to be only truly understood by the poet herself, though she constantly tries very hard to let us into her world.

In ‘The Paramo Train’ Damacela paints vivid pictures of the high treeless plateau where her father’s ashes lie, and in ‘Mango River’ we are transported by her description of picking mangoes from a canoe, the fruits being likened to “flavoured suns in our hands”. In ‘Altitude’ we share in the knowledge that the grandmother is fading until, finally, in ‘Mourning’ we share the pain of her passing. In the United Kingdom we often hear of how much worse a burial seems in the pouring rain. Damacela’s recollection of her Abuela’s funeral in thirty-six degree heat with her faithful dog, Rafi, moaning next to the coffin feels just as hard to bear.

With so much raking over the past, we might think that the poet has become a little lost in her memories. In ‘Mementos’ it is as if she rebukes herself, and all of us, for dwelling on the tiny treasures we keep to remember things by and concludes:

Although still indulging in recalling things from the past, many of the next poems feel more up-lifting and positive. I was particularly drawn to the change of tone in ‘Sun Love’. Here the poet is gorgeously naughty and liquid, juicy even, writing of lovers who “lick each other’s/salty promises” and including lines like:

The poet gives us snippets of family life such as those in ‘Drenched’ when her son comes into the world, “his hair the soft blow of the most ancestral force”. We experience a strange mix of humour and annoyance in ‘The Limits of My Love of Nature’ when a wasp stings her daughter. There is Christmas happiness in ‘Holiday’ where “wonder shimmers the gifts/nesting under the tree” and we hear the laughter of children on their sleds in ‘Joy, Repeat’. At last we come back down to earth with the possibility of cancer cells in ‘Intruders’ but ‘Rain Noir’ brings the reader “the smell of second chances and redemption.”

Damacela sometimes plays with how a poem looks on the page, as well as utilising couplets and the modern sonnet. She is brave enough to be confident in the very short poem of only six lines, where the message has to sing out in so few words. As a reader, I understand the poet’s nostalgia and her ache for home, but I was better able to connect when she was being up-beat and hopeful. This collection seems both a work of passionate out-pouring and of careful control; it shows Latin temperament mixed with the cool balm of the wisdom we all hope comes with experience.