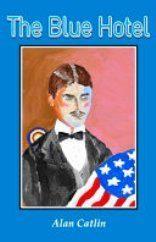 Poetry review – THE BLUE HOTEL: Charles Rammelkamp considers some episodes in the lives of famous people as imagined in poems by Alan Catlin

Whether he’s writing about Glenn Gould, Vincent Van Gogh, Mary Ellen Mark, or any of the dozens of artistic and cultural figures he’s meditated upon, Alan Catlin brings a deep understanding of his subject and a bleak atmosphere of tragedy to his verse.

The Blue Hotel is a three-part collection that focuses in turn on one of three figures born in the late nineteenth century, Mahler, Crane and Stevens, all of whom have some connection to New York, though admittedly I found myself wondering why these three together? Any implied or explicit connection?

Mahler in New York, the first section, includes poems like “Mahler Composing the Brooklyn Bridge,” “Mahler in Hell’s Kitchen,” “The Broadway Mahler,” “The Museum of Natural History Mahler,” “The Greenwich Village Mahler.” They show us the alienated maestro as a spectral figure hovering around the metropolis. “Isolated, locked in, the only music is / metal cups drawn against metal bars,” is how Catlin begins the poem, “The Voice that Cried in the Wilderness: The Riker’s Island Mahler.” Hounded by the growing anti-Semitism in Vienna, despite having converted to Catholicism, Mahler fled Austria and spent his last few years as director of the Metropolitan Opera and New York Philharmonic, and in Catlin’s surreal verse he feels like a ghost.

The final poem in the Mahler section, “Mahler’s One Thousand and One Nights in New York,” while alluding to the Arabian Nights tales, roughly indicates the length of his stay in New York, 1908 – 1911, and the poem ends with an allusion to his dead daughter Marie, born out of wedlock. She was more or less the reason Mahler married his gentile wife Alma, who at the time they were in New York was having an affair with Walter Gropius, the Bauhaus architect (whom she married four years after Mahler’s death). Ill, Mahler returned to Europe for treatment but died within weeks and was buried beside Marie in the Grinsing cemetery in Vienna. In the poem, it is New Year’s Eve, and outside revelers celebrate.

The next section, Crane Dreams, deals with the sad life of Stephen Crane, mostly known for his Civil War novel, The Red Badge of Courage, but also several others including, indeed, the short story, “The Blue Hotel,” from which this collection takes its name. Crane suffered from tuberculosis and died before he reached the age of thirty. Catlin asks, in “Stephen Crane’s Red Badge of Courage”:

In “Richard Harding Davis,” a poem from the perspective of the first American war correspondent to cover the Spanish-American War, we read about Crane’s “death wish,” as he throws caution to the wind, covering the fighting, bullets whizzing around him. We see this in “John Berryman’s Rough Rider, Stephen Crane,” as well.

Crane met Cora Taylor in Jacksonville, Florida, while seeking passage to Cuba to cover the pending war. Cora features in several of the poems, including “The Hotel de Dream,” “Jessie Conrad’s Dream of Stephen Crane,” and “Cora Crane Author.” Several years older than Crane, Cora was the madam at the “Hotel de Dream,” a whorehouse in Jacksonville.

But when he first sets sail for Cuba January 1, 1897, the ship he is on strikes a sandbar in the St. Johns River a couple of miles from Jacksonville, and he escapes on a dinghy. Crane’s short story, “The Open Boat,” reflects this experience, and Catlin’s poem by the same name explores his impressions. Later, Stephen and Cora move to England, where Crane befriends Joseph Conrad and H.G. Wells.

The final poem in the Crane section is called “Wallace Stevens, Reporter, Covers the Funeral of Stephen Crane.”

The tone throughout this collection is very “Catlinesque” – glum, ominous, murky – but while I am still scratching my head about why these three in the same book, does it really matter? Alan Catlin makes these names we read in poetry anthologies very real. No doubt, when they stroll into that bar, Mahler, Crane and Stevens share the same poison.