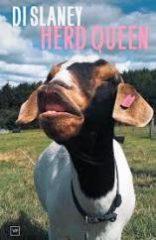 Reading Herd Queen is like sitting down at a banquet: delicious courses of beautifully prepared food appear, varying in consistency and taste and all leaving you wanting more. New poetic forms are presented, such as the Welsh gwawdodyn; and the range of subjects Di Slaney has chosen for inspiration is impressive. There are poignant poems about family relationships and childhood memories, as well as many humorous and irreverent verses. Slaney is particularly skilled at using rhyme and assonance in subtle ways that carry the narrative forward without ever being intrusive. Herd Queen is her second collection and shows her confidence in employing different voices that are funny, melancholy or brazen.

In the first part of the book, “Rosemary thrives”, we meet a menagerie of creatures – a talking donkey, an ageing goat called Geraldine and Mayhem the Herdwick ram. Each is described with love and an intimate knowledge of their individual character. Slaney delights in using composite words to capture the mood and behaviour of both human and beast. In “Meeting Geraldine”:

These sensual words and images evoke great tenderness and deep communication between the speaker and the elderly goat. However, Slaney refrains from being overly sentimental. In “Herd Queen”, the poem that gives the collection its title, the speaker imagines herself as ‘queen of the hill, grumpiest nanny,’ who outwits rivals, and possibly her owner, at every turn:

Dire consequences arise as a result and this formidable nanny goat persona makes sure ‘my hot backfired cud / lands in her open maw’ before she splits her protagonist’s nose open with a crack ‘like a sniper’s shot.’

As someone who has written an ode to human poo and its importance in diagnostics, I was delighted to read Slaney’s witty poem ”Jubilate Excreta”, a pastiche on Christopher Smart’s “Jubilate Agno”, celebrating his Cat Jeoffrey. Slaney has fun describing the different shapes and consistency of animal excreta. The poem starts:

The five sub-categories of ovine excreta are listed and include:

The repetition and spacing emphasise that dung is ‘one of the four main things in life’ and draw our attention to its central importance in animal husbandry.

The second part of the collection, “Witness”, contains a series of reflective poems, rich in visual imagery and often based on photographs or even on being in the shoes of the photographer himself, as in “West of Dolgellau”. In this poem the pleasure of solitude and physical endeavour are captured lyrically as the speaker takes his:

Troubled family relations are explored in “Witness” and “Bottle” and there are three poems written in the voices of real historical figures. Useful notes at the back of the book provide further information on these characters. “Postcards from Powys Aberangell 1956” is constructed according to a traditional Welsh poetic form with a complex rhyme scheme. The result is a moving lament by a young woman writing to her mother soon after giving birth and acknowledging her feelings of inadequacy, loss and loneliness. The song-like quality of the poem is poignant and eminently suited to the subject.

I particularly enjoyed reading the final part of the collection “A Hex for Modern Times” in which many of the poems have a playful, mocking or impudent tone. “The Mice at The Troubadour” is a wicked parody of an evening of poetry readings with Beardy, Titter, Diva and Uppity Mouse all playing different poesy roles.

“Rejoice” is an ironic sonnet about having to go to ‘yet another wedding this year.’ It ends:

The sexual and the sensual merge in several poems. An intriguing example is “5.15” in which the speaker has to strip to her black frilly underpants for an unnamed procedure, administered from behind:

Whatever has been given ‘sometimes twice / a week if I need you and you’re free’, clearly provides relief. Its unexplained nature only adds to the sense of mystery, as does the clever rhyme scheme sounding like a spell or an invocation.

“Disgraceful” is a celebration of singer Shirley Bassey whom the speaker wants to emulate when she reaches the age of 73. The last quatrain leaves us with a glorious image of both Bassey and the narrator:

Herd Queen is a delight. I am looking forward to re-reading it and savouring its varied menu on many occasions.